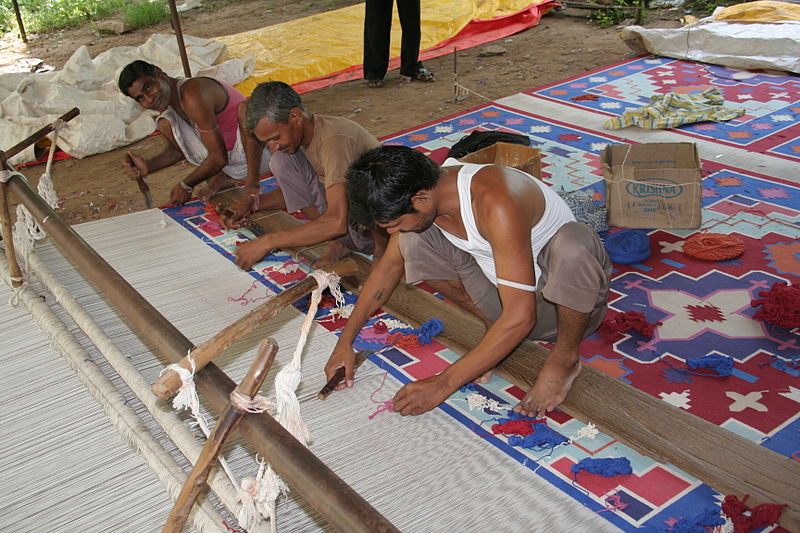 Earliest known reference to textile manufacturing is in the Rig Veda. There is a story about Sage Gritsamada in the Second Mandala of Rigveda which says – Sage Gritsamada first sowed cotton tree and received some cotton from it. He then made one spinner to make thread out of this cotton and eventually he made cloth using this cotton. This is how Sage Gritsamada gave this idea of making cloths via cotton during Vedic period. Historically India has made cloths of silk and cotton, and even gold and silver lining has been used. Eventually Indian textiles captured the world market and ancient Greek, Egypt and Arab world became our buyers.

Below are some accounts of foreign travellers to India.

Tavernier, a French businessman who visited India in mid seventeenth century made a detailed study and gave some interesting observation about the cotton fabric. He said:

“this (cotton fabric) gorgeous material is so smooth that it barely makes it contact felt. The fine embroidery is so intricate that it is challenging to minutely observe it with the naked eyes. He further added, ‘similar finesse and intricacy can be noticed Kalicut (name of the cotton cloth) of Sikanj (Malwa Province). The fabric is so exceptionally fine and fluid that it is would reveal the unadorned natural persona of the bearer.”

Narrating an anecdote from his memoir, Tavernier said:

“A Persian Ambassador on returning to his country gifted a coconut to his emperor. The courtiers were undoubtedly surprised at his uncanny selection of a gift for an emperor. However, they were completely taken aback, when they found that a 230 yard long Muslin cloth was neatly packed inside that very coconut.”

Mr. Wilkins gifted this fine Muslin fabric to Sir Joseph Bake; stunned by its magical finesse he made some further enquiries into its structural aspects. Bake rightly observes that Muslin is a perfect example of the intricate works and finesse of past. Bake himself noted the measurements and dimensions of the cloth and sent it to India House, he wrote:

This meant, the average length of each thread was around 1028.5 yards and 29.98 yards of thread was woven into every 1 grain! It is evident that the thread count was, astonishingly enough, around 2425 counts. Even with modern high end technology, we can barely surpass the thread count of 500-600 counts!

“Over the ages, India textile industry has shown unparalleled workmanship and artistry and successfully maintained supreme quality standards. Certain qualities of the pure Muslin were so fine, as though they were crafted by some super human forces, say elves or butterflies.”

We can find several such illustrations and anecdotes throughout history where travelers and visitors have praised India’s workmanship. India’s entire textile industry was dependent on weavers and other skilled sects. Every village was a self sufficient entity in itself when it came to textiles. Our villages present an incredible illustration of how sustainable development can take place without high-end machinery and corporate style management.

The British generally wore clothes made up of either wool or leather even in summer. When Indian cotton clothes were introduced to them, they found it to be comfortable to wear in summer, it gained popularity among common people. Demand for Indian fabrics increased and this posed a threat to the traditional woolen industry. Due to this, an Act was passed in 1700 against the import of any of such fabric from India, Persia and China. All the goods seized in the process were to be confiscated, sold by auction or re-exported. But the consumers were not ready to give up use of imported cotton materials. Many pamphlets were published by representative of woolen industry to prevent consumers from buying those cotton goods. People wearing cotton clothes were attacked and even the houses with any of such cotton materials found were damaged. However this violence could not hold back the need of people to be clothed in something other than wool or leather. This tremendous violence and protest had to be addressed with new Act of prohibition. However this Act did not impose any ban on trading of cotton fabrics but they had to be kept in the warehouses and re-exported to other parts of the Europe. When the imports from India were restricted, imitators found a golden opportunity to make profit out of depressed demand of consumers. They started making low quality cloths in Britain itself and started selling these cloths in Britain.[i]

Even then the British business houses were not satisfied. Therefore in 1721, British parliament passed much more comprehensive Act than the older one, according to which anybody found in possession of these fabrics had to bear penalty. After this British business houses had started thinking about making machines for this industry. The innovation of spinning mill took more than three decades i.e. In between 1733 to 1765 they actually created first weaving machine to use steel comb replacing the early wooden combs. Then eventually they created a lot of these machines with some or the other means of improvisation, and at the same time they imposed several taxes on Indian weavers to destroy indigenous textile businesses of India. Not only this, they restricted Indian textiles to enter into the European markets. This effectively destroyed the Indian textile industries and increased the revenue of British industries.

Imposition of taxes, banning of Indian textiles in other markets and physically abuse of Indian weavers by British caused the death of Indian small scale textile industries. As Indian industries declined, British started selling their textiles in Indian markets too. American civil war (1861-1865) caused cotton prices to rise and led Indian farmers to turn towards cultivation of raw cotton. It helped Indian businesses to a certain degree but it couldn’t reach up to that level which it acquired in the past.

After independence, India has continuously followed the same taxation model of Britain which causes more damage to small scale industries and local indigenous weavers. Due to partition, a big chunk of Indian textiles went to East Pakistan (now Bangladesh).  Moreover the Nehruvian establishment followed the same British and Russian model of industrialization and because of this a lot of textile mills were established and they had started making textiles in India.  It actually increased our GDP as per Nehru expected but it failed the Mahatma Gandhi’s model of decentralization which says – We should follow ‘Production by masses’ instead of ‘Mass production’. British made machines because their need exceeded their population, but India should have followed the model of ‘Production by masses’ because our population was always more and needs was much lesser. But due to mass production by machines, thousands of people became unemployed. Most of the talented artisans and castes committed suicides or become labourers in other industries.

It is the need of the hour that we understand the talent of these skilled castes & skilled artisans and remove unnecessary taxes that were imposed on them at the time of British Raj. If the government understands the talent and skills of these people and provides necessary support, we can again create a billion dollar opportunity without huge investments. These people are already talented and simply need support from the government. But if we continue to teach everyone English and computers in the name of skill development, then we will only produce more salesmen and gatekeepers of shopping malls.

If we want to win the race of the world the game should be ours.