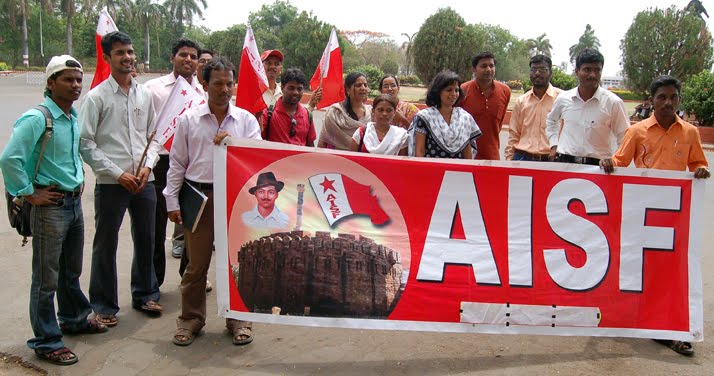 A reader alerted IndiaFacts to what an ongoing campus war occurring in Jawaharlal Nehru University (JNU). The war though is being fought with posters and pamphlets. The occasion this time is the upcoming celebration of Vijayadashami on the JNU campus.

The fact that the JNU is the Mecca of Marxism in India is beyond doubt. And the fact that Indian Marxists have played a singular role in deriding, distorting, and demonising Hinduism for about 70 years is equally beyond doubt. In keeping with the same tradition, the student group AISF put out the following poster, an “Open letter to the Vice Chancellor of JNU” all over the JNU campus. (Click the image below to view the full size)

What AISF says in not so so many words is this: it does not want the VC  Prof. S. K. Sopory to attend the Vijayadashami festival.

In response, India First, a student group ideologically opposed to AISF published a counter to AISF’s false propaganda. (Click the image below to view the full version)

The full text (in the image above) of India First’s rebuttal to AISF’s Communist propaganda is given below.

While AISF brings out poster abusing Hindus and Hindu festivals ( An open letter to VC of JNU dated 1/10/2014) in alliance with neo-Nazi groups with usual bogus theories born out of gibberish Aryan Invasion Theory, lets have a look what its parent party CPI has been doing these days. CPI has been allowed to end untoucahability towards Hindus by the communist coven as per a decision reached at within the LDF because the efforts of communists to attract Christians and Muslims have “not been quite” successful. Below is excerpt from news report Published: 26th Jan 2014 –

“Its mythology over ideology for the Communist party of India as a survival strategy. Left staring at a rapidly shrinking support base, and unable to attract the new generation of voters, the Communist Party of India (CPI) is turning to the power of Hinduism to stay relevant. Today, a three-day seminar begins in one of the last red bastions in the country which will focus on the “power of the past”. The Kannur meet—aptly called Bharateeyam—will have stalwarts studying the past to seek answers for the future.

For the first time in the history of any Left party,  sessions will be held on traditional Indian knowledge systems, Indian philosophy and culture. Also on the agenda are detailed discussions on Vedic and pre-Vedic periods and the Upanishads. The seminar, which will be attended by academics and Vedic experts from across the country, will have separate sessions on Vedanta, Indian Philosophy and Thoughts, Relevance and Significance of Upanishadic Literature and Indian Knowledge Systems. “Vedic literature forms a wonderful monument of literary wealth handed over to us by our ancestors…” begins the brochure for the seminar. And the stated objective of the meet is to “popularise ancient authors and their thoughts to the new generation without any prejudice.”

While one may, out of habit, associate these topics with right-wing politics and ideology, one need not anymore if one goes by the CPI argument. “Vedas and Upanishads are part of our collective past. Why should we let the RSS hijack it? We all have lessons to learn from these ancient texts,” said a CPI leader when asked about the apparent incongruity in the topic of the seminar and the tenets of Leftist ideology. Organised on behalf of a trust named after late CPI leader N E Balram, the seminar is being attended by politicians and academics from across the country.

“Other Communist parties may agree or disagree, but it is a fact that no Left party can survive in India without acknowledging India’s collective past and traditions,” the CPI leader added for good measure. Going a step further, the brochure proudly declares that CPI leaders like Veliyam Bhargavan and K Damodaran are “scholars of Vedic literature and classic Sanskrit.”  (http://www.newindianexpress.com/thesundaystandard/Tough-Times-Reds-Cite-Vedas-to-Win-Hearts/2014/01/26/article2020286.ece)

So AISF must come clean on its stand on Hinduism and worship of mother goddess in particular. Does it still believes in now dis-credited Aryan Invasion Theory? Does it believes that worship of Mother Goddess, which is the most ancient tradition of the people of this land ie Dalits & tribals and which even pre-dates vedas should be abused by neo-Nazi vandals? Does it supports that an event, literature or festival should be boycotted/banned because they supposedly “hurt sentiments” of some people? Then does it support Dina Nath Batra’s attempt to drag books into courts because they “hurt sentiments” of some people? People are not surprised at the double-speak and thuggish behavior of AISF because it too is a communist party after all. And like all “believers” in the criminal ideology of communism, its gleefully sides with Nazi groups who pose as champions of social justice.

IndiaFacts welcomes members and/or supporters of AISF to respond to India First’s rejoinder in a spirit of encouraging open debate.