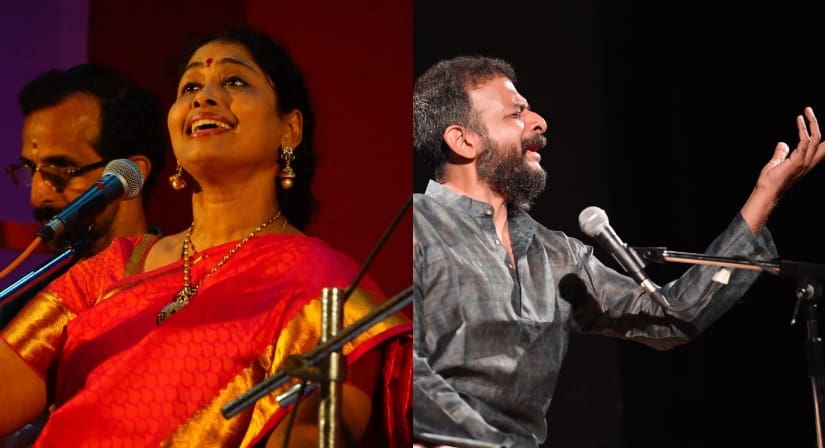 A recent statement by a group of activists, writers, and some artists, speciously titled “reclaiming our heritage,” purports to defend freedom of speech and artistic expression in the context of the recent flap over classical Carnatic music compositions being sung with changed lyrics.

The title is specious because they are not reclaiming a heritage – they are merely hijacking it in order to undermine its cultural, societal and religious context, to further the ongoing agenda of rendering anything Hindu sterile and backward.

A similar project has long been underway in Yoga, for example. Is it good, they ask? If it is good, decontextualize it, remove it from Hinduism, “secularize” it, and do it all in the name of liberalism, humanism, and artistic expression. Employ history selectively, and even falsely, if need be. And so on.

Of course, the current exercise in politics is neither liberal nor humanist, and it definitely is not good art – if anything, it is pathetically, embarrassingly bad art, which would have been tossed aside, but for its politics.

The politics starts with redefining Classical Carnatic music as “art music.” An absurd term, as all music is art. Classical is a good word to describe a genre with evolved, well-articulated systems, requiring cultivated knowledge for a full appreciation.

Carnatic music and the compositions in it, particularly by the famed trinity of Thyagaraja, Dikshitar, and Shyama Shastri, are classical in every sense of the word. The subject of the “Sahitya” the lyrics, is unimpeachably, unapologetically, religious. If anything, in the minds of these composers, this form of music cannot be separated from “bhakti,” devotion. To quote only one well-known example, Thyagaraja sings, “Sangeetha gnyanamu, bhati vina sanmargamu galade – musical knowledge without bhakti cannot take you on a good path”.

What is more, it cannot even be separated from what we understand today as Hinduism. Again, to restrict ourselves to one example from Thyagaraja, in Samayamu delisi in Asaveri: “It is immaterial if a song which does not refer to Sri Rama is sung or not sung”. For him, Rama is “Sangitasampradayakudu”, the upholder of musical tradition.

Be that as it may, you might ask, what is wrong, if in a liberal society, someone sings, say, songs to Christ in a Carnatic idiom? Actually, nothing would be wrong at all. Go ahead. Write one, and sing it. If it is good, why, we might be even be nodding our heads to it in appreciation.

But that, however, is not what this is all about.

The “statement” for example laments that one Carnatic singer was berated for singing a “Christian song.”

She was not singing a Christian song. She had been recruited to dish out a Thyagaraja composition, a particularly recognizable one, where many words, like Rama, were substituted with other words and phrases. This kind of maiming and fracturing is classic hijack, constructed out of a hostile agenda. And the return hostility was thus understandable.

But take gospel music in the West. It has been used for decades in mainstream popular music, in different guises, as folk, country and even rock and roll, from Elvis Presley and Bob Dylan to many a modern singer-songwriter. Subjects have included love, loss, the works – secular subjects – as well as Jesus and Christianity.

But here is the thing. We in India have been doing this as well, something that the pseudo-progressives do not want to acknowledge. What is our mainstream popular music? Film music. And for decades, Carnatic and Hindustani raaga based songs, even songs doing full justice to the classical structure, have regaled music lovers. And the subjects again, have been everything you can think of – from love and loss, to comedy and combat.

Also, let us not forget, love, loss, and longing are the subjects of many a classical composition, across India, many famously blurring the very distinction between love for the human and love for the divine.

Even outside the film music world, in the 20th century, there is the example of Subramania Bharathi, one of the great examples of progressive social thinking within the fold.

Given the richness of that body of work, both lyrically as well as musically, why would anyone want to maim, fracture, and undermine the classical compositions of the Carnatic world? These works, after all, as far as Hindus are concerned, are on par with the Bible or the Koran. These compositions to this day are sung in temples, many as part of the formal offerings to God in the ritual sequence.

So why do you want to take the lazy, inartistic and in-elegant approach of merely substituting words in the compositions of the Trinity, and trying to pass it of as a great revolutionary act of either progressiveness or musicality? When it is obvious that it is neither?

Considering that the artistic, intellectual, or societal achievement is zero, the aim becomes clear. Attack, hijack, and undermine Hinduism.

Those indulging in extreme grandstanding about new compositions for Christ and Allah within Carnatic music should go ahead and write them. And sing them where they find listeners. And leave the classical compositions alone.

Artist and sculptor Shakti Maira has written in his 2007 book Towards Ananda, that Indian classical music is a:

“system where there is a deep concern for beauty and inter-relational rhythm, harmony, balance and proportion. Change in this music – the creation of new ragas, bandishes (compositions), new instruments, techniques and gharanas (schools) – has occurred from a creative expansion and deepening rather than by notions of departure, displacement and subversion.”

What our friends on the Left want is departure, displacement and subversion. We will not wish them good luck.

India’s engagement with music and music’s association with our religious ethos runs long and deep. This is the 750 birth year of that great 13th century saint Vedanta Desika (1268-1369). In a composition called Sri Hastigiri Mahatmiyam, the story of the origin of Kanchipuram, Desika suggests that the very name of this land, Bharatha, is an acrostic of Bhava (feeling), Raga (melodic structure) and Thaala (rhythm) – thus Bha-ra-tha.

We are the ones who should be doing the reclaiming of our heritage and identity.