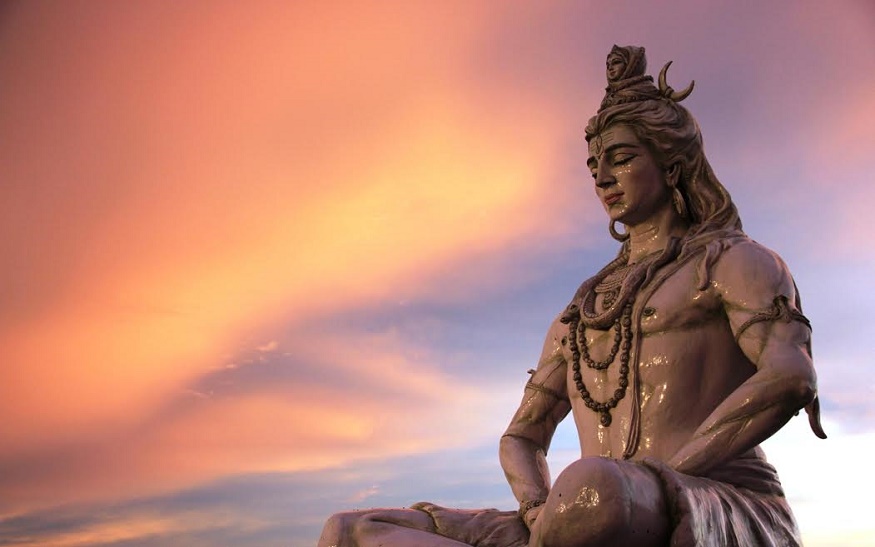 For years, Amarnath had a special pull over me.  The allure of that remote cave in the snowy depths of Kashmir was irresistible.  But obstacle after obstacle kept me from my destination – either the route was closed, or my trip to India had to be rescheduled, or some other intervention of fate and karma kept me away.  From a karmic perspective, perhaps the causes and conditions had not yet ripened.

And then, one day, I made it.  It was a harrowing walk through narrow, treacherously steep passages of rock, wading through deep glacial snows, hours and hours that took the better part of a day, finally climbing up to the abode of Shiva, hidden from the world.  I will never forget that cold gray twilight, finally attaining Shiva’s darshan at Amarnath, breathless, heart racing.  It was the first day of the yatra and I must have been one of the first fifty people who had glimpsed the naturally formed ice linga that year.  It was dusk when I reached, and no one else was there other than two birds circling above the cave.  It is still etched in my memory – that lofty, tall cave, crowned by majestic peaks whose naturally formed shapes resemble and are named after Ganapati, Shiva’s son, and the other devas.

It was otherworldly.  For long minutes, I stood in solitude with Shiva and the two birds circling overhead.  Even those birds were like devaduta’s, the messengers of devas, for me.  That simple mound of shining ice radiated the auspiciousness of Shiva.  The air, still and cold as it was, seemed to vibrate his chants.  As I stood there, enraptured, the only thought that came to my mind was that there will never be another moment in my life more perfect than this one.  Perhaps as perfect, but never more perfect than the exhilaration of being in the presence of Shiva.  It was the most awesome moment of my life, the most sublime, profound, fulfilling moment frozen in time and memory.  Even on my deathbed, I will recall the color of the stone of the mountain, how white and bright shone that ice linga, the sensation of being at the feet of Shiva.

That is what Shiva is to me – austere, remote and reigning over snowy wildernesses that stretch across continents.  This is how I see Shiva: long-limbed; toweringly tall; his complexion a greenish gray, the color of emeralds and ash; long, matted, tawny hair falling to his waist; the scent of camphor and incense clinging to his body; a tiger skin wrapped around his waist; one of his strong hands gripping the mighty trishul.  As ferocious as his form his, his smile is beatific and gentle; his eyes are half-closed in reverie; the center of his throat throbs a hot blue from the Halahala poison he swallowed to save the devas.

In the practice of bhakti, we cultivate personal relationships with the deities until they are as real to us as our own family.  For me, Shiva has become a father figure, a kindly guardian, who is watching over me.  My most powerful pilgrimages have been to his abodes – Kedarnath, Amarnath, Mani Mahesh, Tunganath and others.  When I go, it feels like homecoming, like a reunion with my divine father, as if Shiva has called me back to my Himalayan home.

Krishna is my ishta devata, but he is clever, mischievous and elusive – he has to be chased.  Shiva, on the other hand, responds as soon as he is called upon.  That is why it is said that Shiva is the easiest to please among devas. Even simply offering a milk bath to him, even fasting for just one Monday, is enough to please him. It is through these practices that I have started developing my own relationship with Shiva.

Upasana means to sit near the deity upon whom we are meditating, to gradually imbibe their qualities and energies, to ultimately eradicate the barrier of delusion between ourselves and the divine.  In the beginning, there is a belief, a hope, that the deities are real, that they can hear us – in the beginning, it is a calling out, a question mark echoed through the cosmos.  Then, gradually, that suspension of disbelief turns into faith, which then becomes a certitude that, yes, Iswara is real, and later, that Iswara is here, in the same world with us.  As our bhakti deepens, there is the sense of being near Iswara, and finally, becoming one with Iswara.  Perhaps a precursor to the fivefold stages of mukti according to bhakti – salokya, being in the same realm as Iswara; samipya, being near to Iswara; sarupya, acquiring the form and the powers of Iswara (such as in Vaikuntha, where the attendants of Vishnu are non-distinguishable from Vishnu himself); and finally, sayujya, the merger of the individual into Iswara.

Puja and pilgrimage are what enlivens the deities and make them palpable to us.  Repeated worship, performed sincerely, brings one closer to the devas.  For many months, I performed Shiva vrata on Mondays, fasting all day and then eating at night after abhishekham at the temple.  The sight of the black stone lingam, washed with milk, yogurt, ghee, sugar, honey, sandalwood and so on, adorned with ash and flowers, washed something inside of me.  The mental recitation of his name roused something of him within me.  Shiva was no longer an abstract ideal, but a real, living presence, a companion, a guardian.

The Hindu pantheon is the most resplendent, colorful, vibrant, and diverse conglomerate of deities imaginable.  Most of the great pagan pantheons of the ancient world are merely derivative of the Vedic / Hindu pantheon.  Yet, our pantheon of Vedic and Puranic deities is suffering from sad neglect today.  Too many Hindus turn away from murthi puja (worship of deities through images/icons).  It is more fashionable to parrot philosophical platitudes masquerading as Vedanta or seek esoteric meditation practices than it is to engage in deity worship.  Deity worship is the most ancient and sacred of our spiritual traditions, handed down to us from the Vedas themselves.  First, we invoked the devas through fire and hymns, then through meditation on their form, then through their names and sculpted images.

Deity worship is the basis for bhakti.  To lose this would be to lose our connection to the devas.

What we Hindus need most today is Dharmic zeal.  Zeal for our devas, zeal for worship and observing the vratas and traditions that constitute our Dharma.  Many of us will find Maha Shivaratri too inconvenient to observe properly.  We will get busy with weekend plans or make excuses about our kids or other family priorities.  Perhaps we will make a halfhearted trip to the temple, cursorily take aarti and prasad, then leave convinced that our duty is done, even if it is mechanical, even if it is just going through the motions.  We will tell ourselves that Shiva is in our heart, so it does not matter if we go to the temple or not, if we worship Shiva during each prahara of Maha Shivaratri or not.

But it does matter.  The Vedas, Puranas and Agamas, the traditions passed down from our ancestors and acharyas, enjoin upon us the importance of observing these vratas and sadhanas.  It is through these practices that we access the divine, whether we conceive of it as an external deity or as awakening an aspect of our inner consciousness.

It is not enough to do the bare minimum, to merely go through the motions.  We need that zeal, that passion.  We need to be a little bit fanatical.

Philosophy is no substitute for practice.  Dharma is sustained on the fuel of tapobala (power born of penance).  Our civilization was founded on yajna, sacrifice.  We are a people of temple builders, worshippers of the most ancient, sprawling, pantheon of pagan deities, whose dearest festivals and holidays are inextricably tied with our devas and gurus.  It is not just our birthright, but our duty to stay true to the traditions and practices that have been passed down to us for safekeeping.

As another Maha Shivaratri approaches, I am reminding myself to not grow complacent, to not take shortcuts, to not take Shiva for granted.  It is easy to plateau in sadhana, to grow comfortable and keep doing the same routine and think it is sufficient.  But that is not how we progress on the path towards moksha.  We must push our limits; we must keep alive that zeal.  We must train in sadhana like we do in the gym – increasing our stamina and strength by challenging ourselves.  We must find that burst of willpower to push ourselves to become better devotees.  Because it is that push, that digging deeper, that becomes the oblation of yajna, the fuel that feeds the fire of Dharma.

Shiva is all that is auspicious in all the worlds.  He is the most austere renunciate, yet he is also the easiest of the devas to please.  He is the wild one, associated with the fierce ganas, and he is also the gentle one, accompanied by Parvati and his two sons.  He is Rudra of the Vedas and also the Supreme One among the Tantras.  He is the fierce yogi, whose dance will bring Pralaya, the destruction of all creation itself, yet he is also Bholenath, the kind-hearted one.  As Maha Shivaratri dawns once again this year, let’s keep aside this one day and one night, in worship of our one and only Mahadeva, to sit near him, to worship him, to attain his blessings, to become one with him.