Chennai Rains: What The World Must Learn From India 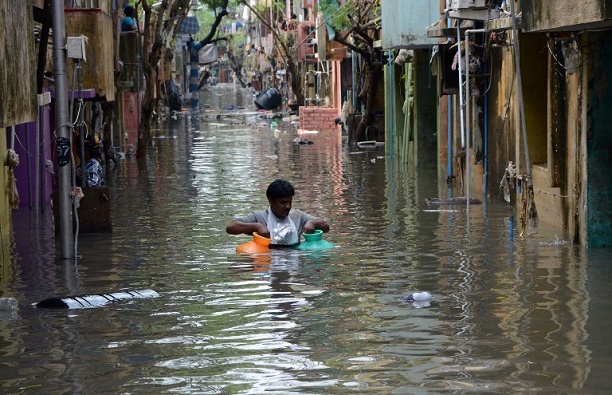 The worst rains in a century battered Chennai and literally submerged the city under water. Virtually every road was cut off. Many homes were flooded. Chennai was without electricity, telephone, and other essentials for several days. The airport was shut down and the planes in the hangar were partly submerged. Nearly 250 people died. Yet, the indomitable spirit of the Tamil people was in full display. The great sage Tiruvaḻḻuvar wrote that one should face suffering with a smile. Virtually every Tamil did that. Even though the city had been crippled, there was no crime. Contrast this with America, where, opportunistic crime becomes rampant whenever natural calamities such as the Hurricane Katrina strike. Instead, the people of Chennai, and Indians in general, responded to the natural calamity in the most heroic manner. A few examples are worthy of mention although I can only humbly add that these are merely representative of the millions of deeds of generosity that were done.

Chennai folks, from every echelon of society, embraced technology (or whatever was left of it), to express solidarity with those in dire need of help. The finest example of crowdsourcing in the 21st century was implemented within a matter of hours. A crowdsourced site called http://chennairains.org/ came up. Thousands of Chennai residents offered their homes for strangers that had been stranded. They listed their phone numbers so anyone could contact them. It was all done spontaneously without any top-down guidance. A close friend living in the Silicon Valley was in panic because his wife and infant daughter were stranded in Chennai and were inaccessible. Their house was in a low-lying area. He went on the crowdsourcing site, picked up the number of a random person (a complete stranger) who he thought lived in the same area as his wife did, and called him. It was 1 a.m. in India.

The stranger not only responded to the call but immediately offered to search for my friend’s wife and daughter and report back on their safety. He waded through chest-deep water, which was contaminated because sewer lines had burst open, for an hour to locate the woman and the infant. They were safe but were without milk and other necessities. He then again waded through sewage water located a pharmacy, got some dried milk powder and water bottles, returned and gave it to them. He had been soaking in sewage water for nearly four hours by then. He then called my friend to report on their safety. I can never think of westerners (barring honorable exceptions) listing their phone numbers in public domain and inviting strangers to live with them. If the West is guided by paranoia, India seems to be guided by trust.

An organization called http://www.foodrelief.org/ is run by a young white American Hindu that has settled down in Chennai. This man and his band of volunteers marshaled every resource at their disposal to cook food and serve the people. They obtained grocery on credit without hesitating for a moment as to how they would repay the loan.

This is not about race or ethnicity. It is about the worldview that Indians have inherited and internalized. A great Tamil poet that lived two millennia ago wrote that we are related to everyone on this planet. Hindu traditions have always taught that we are obligated to everyone else in this world. They called this obligation ṛṇa. An expression of charity, called dāna, is how ṛṇa is fulfilled. I can say with pride that Indians, regardless of how well-read or articulate they are, have internalized these great ideals. That is what inspires them to act spontaneously and selflessly when Mother Nature overwhelms our ephemeral existence.

A common thread of high-thinking selflessness connected those who opened the doors of their homes for strangers to live in and the techie that setup crowdsourcing channels. If a calamity were to strike, I would prefer to be stranded amidst Indians than anyone else. However, the Western media persons or their Indian minions did not deem it fit to report on these exemplary acts because they would’ve portrayed India positively. However, the same media, be it the BBC, NYT, or TOI, never hesitates to exaggerate an isolated act of crime or even fabricate stories to portray India negatively. I am certain that these wolves that never cared to credit the average Indian or resident of Chennai for their lion-hearted deeds would be waiting for the opportunity to credit the missionary outfits and western-funded NGOs for the same. Indian Army, as usual, led the rescue efforts. I salute this finest and most humane force in the world. Army officials remarked that Chennai is the only place where they saw more volunteers than victims! Thank you Chennai folks. Since the army is made of folks from everywhere in India, thank you every Indian. You have the most valuable lesson to offer the rest of the world.

I do not know which media would report this though.