The Chinese self-designation Hua and the root-word Ᾱrya 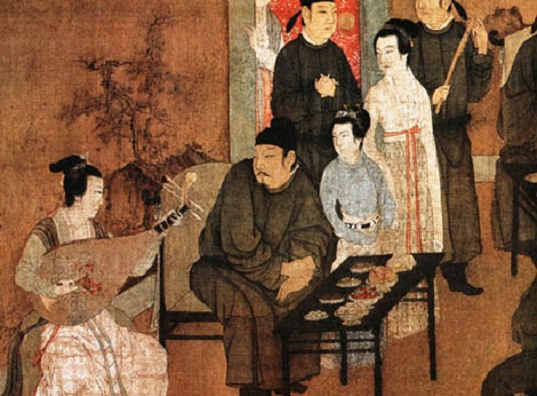 It is but rare that I take the trouble to write a mere summary of a paper I have read with increasing enthusiasm. Here is one occasion. It pertains to “The earliest Chinese words for ‘the Chinese’: the phonology, meaning and origin of the epithet Ḥarya — Ᾱrya in East Asia” by Christopher Beckwith, published in Journal Asiatique 304:2 (2016), p.231-248. Some comments and background data are mine, but for the factual frame, the entire credit goes to Beckwith.

I had never suspected that the Chinese word for “Chinese” has a foreign origin. But yes, it does. In fact, the same foreign word has been borrowed twice and yielded two different Chinese words, one of which is widely used as the ethnonym for “Chinese”.

The procedure for adopting a foreign word is to identify it with a similar-sounding Chinese word. The concomitant character has a certain ordinary meaning, and the adopted meaning may be totally different; but when at all possible, preference is given to a similar-sounding character that also has a similar meaning. Thus, “Coca Cola” yields kekoukele 可口可樂, “what a!, mouth, what a!, fun”, more or less the carefree image that this brand tries to propagate. Sometimes a new character is created around an existing character of which the sound is borrowed regardless of the meaning. “Buddha” yields Fo 佛, which came about by composing the root signifying “man” with the existing simple character fu弗, “not”. Though later apologists tried to make sematic sense of it by explaining “not” as an allusion to Buddhist concepts like “emptiness”, it really had to do with the similarity in sound, at least to Chinese ears of the period. Whereas English words in -ize or -ation keep on reminding us of their Greek or Roman origins, the Chinese loanword gives no hint anymore that it is etymologically foreign.

After the legendary ancestral emperors in the -3rd millennium (including the Yellow Emperor, r. -27th century), the first imperial dynasty in the Yellow River basin was called the Xia 夏 dynasty, r. -21st to -16th century. We have no contemporary sources about this Xia dynasty, which is why many scholars dismiss it as a legend or even a propagandistic construction from the time of the Zhou 周 dynasty (-11th to -3rd). The Zhou had come to power through a coup d’état against the earlier Shang 商 dynasty (-16th to -11th), and they invested a lot in justifying this transgression.

The most important instrument they created to this end was the doctrine of the Heavenly Mandate (tianming 天命). This held that the founder of the Zhou dynasty had received a sign from heaven, in the form of a solar eclipse above his capital, that a heavenly mandate to rule had fallen to him because the Shang emperor had squandered it by proving himself decadent, unjust and no longer worthy of it. To anchor this doctrine, the Zhou ideologues claimed that the Shang had no reason to complain, since this coup d’état was only a repeat performance of the way the Shang themselves had come to power at the expense of the preceding dynasty.

The Chinese are strongly conscious of their national history, and even a half-educated Chinese knows that this preceding dynasty was the Xia 夏. However, around the millennium, scholars active in the government-ordered Three Dynasties Project (i.e. Xia-Shang-Zhou) remarked that there were no known sources giving the early Zhou the name or any other data about this first dynasty, so they had to have invented it. Strictly speaking, there may have existed an aristocratic family drawing its name from the genuine Chinese word xia, 夏“summer”, and it may have served as an imperial dynasty, who knows? Then again, the name may have been arbitrarily assigned to an invented ancient dynasty as well.

At any rate, the same word, or etymologically a homophonous loanword which came to be written with the same character, came to serve as the name of “us, Chinese”. According to Beckwith, in this meaning the term does not predate the Warring States period, the final part of the Zhou age (-5th to -3rd). At that time, knowledge was extant about distantly neighbouring countries, including Daxia 大夏, meaning “Greater Bactria” or “the Bactrian Empire”, i.e. Central Asia, then firmly held by the Iranian-speaking Scythians. These were a predominant influence from Croatia to Mongolia, where they imparted their lucrative knowledge of metallurgy and horse-training (Scythian legends pertaining to these skills were interiorized even by the Japanese). Their ancestral heartland was Bactria, i.e. present-day northern Afghanistan and southeastern Uzbekistan around the Amu Darya river (Greek: Oxus), an oasis friendly to agriculture and habitation amidst a harsh and inhospitable region.

The later Chinese tended to identify themselves with their ruling class. The Qin 秦dynasty (-3rd) yielded the international name China, Sanskrit Cīnā; the Han 漢 dynasty (-3rd to +3rd) lent its name to the usual self-designation of the ethnic Chinese as distinct from the minorities within China as “the Han”. It might be that a Chinese elite for some reason had identified itself with the expanding Scythians.

We do find such a reason in the alternative sinification of the same foreign word. Then pronounced very similarly to the character Xia 夏, it is now pronounced Hua and written 華. This character is a self-designation of the Chinese both internally and abroad, e.g. the Chinese minority in Vietnam is known as the Hoa. Its basic meaning is “civilized, elite” (apart from “flower”, with the same character), the opposite meaning of “barbarian”. The Chinese do indeed consider themselves as the civilized ones, as distinct from the barbarians.

The oldest attestation of Hua 華 as a self-designation is among the ruling class of the feudal state of Zhao 趙. Originally, it seems to have distinguished that elite from all others, not just foreigners but also the Chinese commoners in their state of Zhao. This state lay on the northern border, partly in what is now Mongolia, where the Scythians had come to form an elite. Apparently the ruling class there had Scythian origins, had fully assimilated into China but had preserved a collective self-designation referring to their distinctive ethnic origins and its ancestral homeland of Bactria. A millennium earlier, the Zhou had had a similar history as half-barbarians living near the border, getting enlisted as border defence against the all-out barbarians (like the Roman Empire hiring and thus “domesticating” Germans to defend its border against “wild” Germans), becoming fully Chinese in the process, and finally even capturing the Chinese throne. Further, in the classical account, there is even a hint that the Yellow Emperor, kind of the Father of the Nation, had been an immigrant nomad.

As during the Warring States period Zhao was one of the most powerful states (the last to hold out against the Qin 秦 bid to unify the empire under their own rule), this usage percolated among the elites and then also the masses of the neighbouring Chinese states. Except perhaps to aged and highly cultured members of the Zhao elite, no one was aware anymore that Hua 華 had entered Chinese as a loanword, moreover one that designated a foreign nation. Thus, it finally came to mean “we, the Chinese”. It still has that meaning today, along with Zhong, “middle”, from Zhongguo, “the Middle Kingdom, China”. We still see the two together in Zhonghua Minguo 中華民國, “Republic of China”, and Zhonghua Renmin Gongheguo, 中華人民共和國, “People’s Republic of China”.

The origin of the words Xia 夏 and Hua 華 is the collective self-designation of the inhabitants of Bactria, a country of which the Greeks rendered the Iranian name as Ariana. This is still the name of Afghanistan’s air company. The Iranians called themselves Aiirya, corresponding to the form Ᾱrya in Sanskrit, Arus in Anatolian (Hittite). In each of these languages, it originally meant “us”, “one of us” (as against “them”), “fellow countryman”. Surrounding or subject nations, and finally the Iranians themselves, used the word as an ethnonym for the Iranians. Indeed, Iran comes from Aiiryānām Khšathra, “kingdom of the Iranians”.

In Vedic Sanskrit, it meant the self-designation of the Paurava tribe within which the composition of the Vedic hymns took place. For non-members culturally influenced by the Vedas, it came to mean “Paurava”, Vedic”. Thus, the name of the modern Hindu reform organization Ᾱrya Samāj, working under the motto: “Back to the Vedas”, means approximately: “Vedicist Society”. The Vedic country, North India, became Ᾱryāvarta, “circle of the Āryas”.

In all cases, the word had an elitist connotation. In India, this could be taken to follow from the reservation of a Vedic initiation to the upper castes, but the elitist usage is probably older. The meaning “noble”, well-known internationally for being mentioned by the Buddha in the “four noble truths” and in the “noble eightfold path”, can be interpreted both as “Vedic” (since the Buddha himself had considered his own teachings as a revival of the Vedic seers’ original instructions before they got corrupted by the priestly class, a less literal way of going “back to the Vedas”); and more generally as “socially upper-class”, and hence metaphorically “morally upper-class”. This is the same semantic evolution as in English, where “noble” originally means: “Characteristic of the hereditary upper class”, but now predominantly has its metaphorical, meaning “morally upright, magnanimous”, as opposed to “petty”. (To pre-empt false conclusions, let me add that the appearance of this word in Chinese long predates the transmission of Buddhism to China.)

At any rate, the Iranians came to boast of their Aiirya-ness, as does Cyrus, founder of the Persian Achaemenid Empire, in his well-known Cyrus Cylinder inscription of ca. -535. So did the Bactrian aristocracy. It is with this elitist connotation that the word also came to mean “us, Chinese”, whence developed the meaning “the Chinese”.

And so, in the state of Zhao and later in all of China, the character Xia also acquired the meaning of “grandeur (in manners)”, “courtly sense of ceremony”, while the character Hua also came to mean “splendid”, “excellent”. As a name for the Chinese people, Hua is unapologetic in its claim to superiority.

So, the same word came to designate the ethnic specificity of Afghanistan, Iran, North India and China. The unexpected commonality between India and China is reflected in Tibetan. There, the word for the Chinese is Rgya, from Hua, from Ᾱrya; for India it is Rgyagar, apparently from Ᾱryavarta. At any rate, most of Asia called itself Ᾱrya at one time.

Here we are reminded of the Manu Smṛti, in which it is said that even the Greeks and the Chinese (both of whom the Indians met in Bactria) had once been Ᾱrya, but had lapsed from that status due to a lapse from Dharmic norms, a barbarian-type conduct. Manu was not much of a historian, but at least he was right in seeing something Ᾱrya in the Chinese. For us, then, this glimpse into the strange itinerary of the term Ᾱrya is a healthy exposure to the relativity of core Vedic vocabulary.