Is there a Christian Conspiracy against Sabarimala? 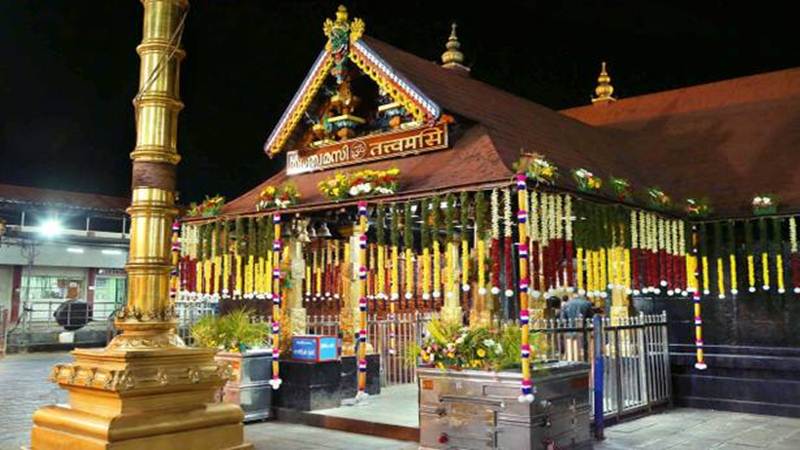 The Supreme Court of India is hearing the issue of entry of women into Sabarimala Temple. The final verdict is not out yet. Thus a discussion on that is not warranted now. Devotees have begun the vrat (austerities) for the Sabarimala Pilgrimage. Many others are in the process of beginning theirs. We thus need to understand the historicity of this issue at in question. It is important to know what transpired and what happened before this issue landed in the courts. We can save Sabarimala only if we know this. Else, we will see that the Lord Ayyappa temple will vanish in front of our eyes.

What is their objective? It is primarily to establish a church near Lord Ayyappa’s temple and also to ensure that it should become a centre for Christianity and not a Pilgrim centre of Hindus. Large scale conversion in and around Sabarimala region is not a recent phenomenon, it has been happening for quite a while. Evangelists attempting to proselytize devotees visiting Sabarimala by saying multi God worship is the reason for their miseries. Saying these they take them to St Thomas Church and try to convert them.

Lakhs of pilgrims visit Sabarimala. We may think that a few hundred going away may not be significant loss. It would have been a blessing if they had done only that much. But remember, Christian missionaries never stop at that. They have set out to make Sabarimala a Christian centre. The vandalism and attack by Christians on Sabarimala temple on 15th June 1950 is a proof of this intent. Converted Syrian Christians living around Sabarimala, set fire and burnt the temple down. Then Minister of Kerala, C Keshavan, had stated that “one temple down means so much of reduction in superstitions.” There was severe criticism for this.

In the immediate aftermath, Christian missionaries laid low. But they were not sitting idle. They planned on another mission. About 20kms from Sabarimala in a place called Nilackal, there is a temple of Lord Mahadeva (Shiva) On March 24, 1983, they claimed that a 2000 year old wooden cross has been found and a missionary propagated that it was brought by St Thomas. Not only that, he also spread false news that a Brahmin from Chennai unable to tolerate this, stabbed St Thomas to death.

Believing this myth, Christians began visiting Nilackal. Then Government also sanctioned one acre of land to build a church there. Sri Kummanon Rajashekaran, Presently Governor of Mizoram had launched a protest struggle of over 6 months to stop this. Subsequently they sanctioned reserved forest land at a distance of 4 km from Nilackal to build this church.

However, we need to know the real story behind this wooden cross. In the environmental and climatic conditions of Kerala a wooden cross of 2000 year old could have never survived. It is now known that this cross was put there by Missionaries about a week prior to the so called discovery. They also named the street St Thomas Road and Sabarimala as St Thomas Mount. An interesting development happened in the meanwhile. According to the clarifications issued by the Vatican and also confirmed by the Pope, St Thomas never visited India nor was he killed by any Brahmin from Chennai. St Thomas breathed his last in Ortana, Italy. Thus the myth and lies propagated by Syrian Christians in Kerala was busted.

Doing a cursory fact check on discovery of 2000 year old wooden cross and any Christian records also reported negative. There are no such evidences at all. Padre ML Mathir had published a book in 1883 in which he had written that Syrian Christians of Kerala are neither original Christians nor migrants who came from abroad. They were Brahmins who were converted to Christianity.

Another incident that can be recalled is finding of a lizard in Aravana Payasam given as Prasad in Sabarimala. This obvious was impossible as proven by the report of the Special Commissioner of the High Court in his report based on inspection. This clearly was a canard spread by the church to erode the sanctity of Aravana Payasam. Narrow pipe connecting the helical pump attached to the cooling chamber with the filling machine could not carry a rat’s tail or a lizard intact. And moreover, any piece longer than a small slice of coconut kernel in the aravana payasam would be cut into pieces during the draining out process of the cool payasam into the filling machine. Thus it was clear that someone deliberately put this lizard into the container before packing.

There are more. When an Ashtamangala Deva Prashna (Deva Prashna is branch of astrology performed to ascertain the causes of undesirable situations and to remedial actions) was performed to determine causes of repeated stampede in Sabarimala temple – it is said that Christian missionaries were behind fixing the outcome of this process which concluded that the Vigraha (Idol) was touched by a woman, liquor and other intoxicants have been sold in the premise and lot of immoral activities were behind repeated calamities happening in the temple.

Exactly a month later after the Deva Prashna, the main priest of Sabarimala Temple was abducted on 23rd July 2006 by a gang of 10 goons and taken to flat of a Christian lady Shobha John and divested him of all gold ornaments. Shobha John was a sex worker – the priest was stripped and obscene pictures were clicked. Complaining to police proved futile. The DIG also was bought over by them. To trap the priest, western church also established Christian Church Brigade and it was planned by them, revealed by Rahul Easwar.

The mastermind behind this episode were Bechu Rahman, Shobha John, and Biju Peters. It should also be noted that Bechu Rahman is Dawood Ibrahim henchman. Christians and Muslims united to defame Sabarimala. But the truth was known to the world due to this episode. Even to this day, Guruvayur and Sabarimala temples face threat from Jihadis.

Remember! 360kgs of Explosives were discovered on December 3-4, 2016 not so far away in the forests surrounding Sabarimala. This was to blast Sabarimala on December 6th as a revenge for Babri Masjid. Thanks to Forest Guards who discovered this and literally saved Lord Ayyappa!

As proclaimed by Travancore Devaswom Board (which administers Sabarimala Temple), it has revenue of Rs 255 Crores last year. Despite this, it continues to pay hefty tolls, water and electricity bills. For providing facilities to pilgrims in 110 Acres in Nilackal, Sabarimala temple had paid Rs 6.5 Crores to the Government. But for the church a mere 4km away spread over 58 acres, Government provided the land free. The church that was built by lying that it had a 2000 year old wooden cross celebrated its 25th Year which was graced by Oscar Fernandes who bluffed even more about Jesus and the history of this church.

Supreme Court has entertained a PIL and is about to deliver its verdict on the same. Going by the observations thus far, it is interfering in the traditions and conventions of this much revered Hindu Temple. Traditions and conventions are not a matter for legal adjudication, they are long established practices and accepted as such without looking for reasons or justifications. Remember, our courts also lean upon traditions and conventions, not necessarily explicable – and day is not far when even traditions of the court will be challenged and trampled upon. Let me quote Judge we can draw upon an anecdote often quoted by Uthirapathy Kadirvelayudham, noted Advocate and Judge who presided over a Special court. It is a convention that when the Judge arrives in the court, everyone stands up and greet him/her with folded hands. Judge as well as the audience pray with folded hands that the process of dispensation of justice has commenced and that true and fair justice should be bestowed upon everyone.

But he recalls an incident when an accused openly defied this convention and refused to stand up which was reprimanded by a judge who preceded him. The accused had stated in categorical terms that they would stand up only to their supreme faith and would not stand up for ordinary men including the judges. Which faith he belonged need not be said. This is the risk even the court faces in near future, if traditions are subjected to such legal reviews.

One more thing to add – a PIL seeking entry of women to Sabarimala has been filed not by women, nor by any women organization. It is filed by Indian Young Lawyers Association’ Ex-Presidents Naushad Ahmed Khan and President Karan Singh Chandiok. Two short information here: One: It also said that Indira Jaisingh is their guru and she is looking into this case. You all very well know how Modi Govt stopped them from receiving foreign funds. In fact Vivek Agnihotri can tell you how Urban Naxals work! And second: Karan Singh Chandiok’s father was nominated as Additional Solicitor General by Congress lead UPA Government in 2009

Now you know the people behind PIL in the SC and their agenda. Now it is up to you to decide.