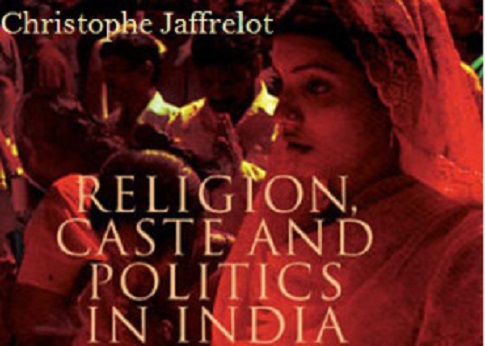 If one wishes to have a cursory idea about contemporary Indian political life, Religion, Caste & Politics in India (Primus, Delhi 2010) by Christophe Jaffrelot is highly recommended. This book is packed with data collected from primary sources and backed by copious citations. It presents a different picture of the Hindutva movement in contrast to the usual secularist accounts of Hindu nationalism.

But as the saying goes ‘it all comes down to one point’, here the point with Jaffrelot again boils down to just this: the negative portrayal of Hindu Nationalism. In particular, the author seems to sympathize with the cult members of the Aryan-Dravidian divide theory and assumes it to be a historical reality, which even the Hindu Nationalists could not deny. To be fair, he distances himself from the believers of this false ‘theory’ and is partially correct in his assessment. But he errs in judging the intentions of the Hindu social reformers. This is clearly seen in Chapter 21 of his book titled  Sanskritization vs. Ethnicization in India: Changing Indentities and Caste Politics before Mandal  (pg-449-459) .

In this chapter, Mr. Jaffrelot puts forth the differences in approach of the various social reformers during the ‘British Raj’ to alleviate the conditions of the ‘lower castes.’ It is clearly seen in this chapter how Jafferlot places himself as a sympathizer of the militantly separatist ‘Dravida’ movement over the ‘Reformist/Nationalist’ one as seen in these extracts:

This ethnicization process provided the lower castes with an alternative, egalitarian sub-culture….. In contrast to the situation prevailing in the South and West India, the mobilization of the lower castes stopped with caste associations. They could not establish their claim on ethnic grounds, which prevented them from shaping large coalitions like the Dravidian non-Brahmin groupings. In fact, they started to move toward the formation of larger fronts only when the state extended its compensatory discrimination policy to what became known as the “Other Backward Classes.”….. Nevertheless, although contemporary reservation policies may have played a role in the crystallization of the low caste movements in South and West India, I have argued that this process was sustained by the ideology of “pre-Aryanism”o r Buddhism….

As mentioned earlier, unlike our Secular Sociologists Mr. Jaffrelot does cite relevant texts and documents to make his claim but like most of India’s left-liberals, he allows ideology to take the lead in coming to conclusion about a historical fact.

Thus, like most of India’s left-liberals Jaffrelot takes a negative view of Hindu reform activities calling them a form of ‘Brahmanical Hegemony’ even while acknowledging their social contributions.  Also missing from the chapter are the viewpoints of great Hindu savants like Swami Vivekananda , Sri Aurobindo , Swami Shraddhananda and Sri Narayana Guru.

Mr. Jaffrelot I hope you do not mind me completing these missing viewpoints:

1. First let me provide the view of Swami Vivekananda stated in an interview that appeared in Prabuddha Bharata, April 1899:

This hardly seems to be a feature of ‘Brahmanical Hegemony’ wouldn’t you say Mr. Jaffrelot?

2. In 20 September of 1907 Sri Aurobindo wrote in an article titled The Unhindu Spirit of Caste Rigidity:

The Nationalist does not quarrel with the past, but he insists on its transformation, the transformation of individual or class autocracy into the autocracy, self-rule or Swaraj, of the nation and of the fixed, hereditary, anti-democratic caste-organisation into the pliable self-adapting, democratic distribution of function at which socialism aims. In the present absolutism in politics and the present narrow caste-organisation in society he finds a negation of that equality which his religion enjoins. Both must be transformed. The historic problem that the present attitude of Indian Nationalism at once brings to the mind, as to how a caste-governed society could co-exist with a democratic religion and philosophy, we do not propose to consider here today. We only point out that Indian Nationalism must by its inherent tendencies move towards the removal of unreasoning and arbitrary distinctions and inequalities.

3. The popular Shuddhi movement of the Arya Samaj which Mr. Jaffrelot sees as the most outstanding example of Sanskritisation was hardly an attempt to bring in ‘Upper-Caste’ supremacy. As scholar John Zavos* had pointed out:

Aryas involved in the Suddhi movement, on the other hand, sought an active redefinition of the Hindu community which effectively eradicated what were perceived as oppressive elements of the jati system in favor of a form of merit-based varna. …

One of the most notable Arya Samaji and an important proponent of the Shuddhi movement in the early part of the twentieth century was Swami Shraddhananda who also fiercely campaigned for the removal of caste/gender anomalies and was hailed as ‘the greatest and the most sincere champion of the Untouchables’ by none other than Dr. Ambedkar. Again we turn to John Zavos who states that:

… at the 1923 Session of the Mahasabha. Sraddhananda tabled three resolutions based on the Arya vision of a restructured Hinduism. The first dealt with the untouchables, calling for practical concessions (such as access to wells and schools) as a prelude to their assimilation (through suddhi) into the Hindu community. The second dealt specifically with the Malkana Rajputs. The third dealt with suddhi as a process of conversion from other religions, calling for the acceptance ‘by the whole Hindu community of converts regardless of which ‘sect’ had performed the suddhi rites (Leader 8 August 1923). Resolutions one and three, then, made fairly definite allusions to the recognition of merit-based varna. Both implied the acceptance by the ‘Hindu community’ of reclaimed Aryas, whether untouchable or non-Hindu, who had been invested with twice-born status in accordance with Dayananda’s flexible varna structure.*

It seems the Arya Samaj under Swami Shraddhananda’s leadership veered more towards a merit-based egalitarian society over upper-caste dominance. On this point, Mr. Jaffrelot can see what Dr. Ambedkar had to say:

While I reject the Vedic Varnavyavastha for reasons given in the speech, I must admit that the Vedic theory of Varna as interpreted by Swami Dayanand and some others is a sensible and an inoffensive thing. It did not admit birth as a determining factor in fixing the place of an individual in society. It only recognized worth. The Mahatma‘s view of Varna not only makes nonsense of the Vedic Varna, but it makes it an abominable thing. Varna and Caste are two very different concepts. Varna is based on the principle of each according to his worth, while Caste is based on the principle of each according to his birth. The two are as distinct as chalk is from cheese. In fact there is an antithesis between the two.…. (Annihilation of Caste, page-48)

4. One of India’s greatest social reformers in recent history has been Sri Narayana Guru who belonged to the lower-caste Ezhava community. It was Sri Narayana Guru who challenged the foundations of social orthodoxy in Kerala by building temples that were open to all, irrespective of caste as well as prescribing education as a means of enlightenment.

So deep was Gurudevan’s impact in Kerala that even the Communist Party, which was first elected to power in the state in 1957, had to recognize the fact that Kerala’s staus as a state with social egalitarian characteristics is the result of Narayana Guru’s vision. The Guru reversed the entire social system of Kerala, and did so without causing any social discontent unlike what E V Ramaswamy Naicker did in Tamil Nadu.

But  Narayana Guru is not very popular among the secularists and foreign India-watchers when compared to E V Ramaswamy Naicker, the reason being the fact that Gurudevan was able to implement social reforms by working within the framework of Hinduism. His legacy upsets the now-dominant ‘Secular’ description of Hindu tradition as a den of caste oppression beyond redemption.

In the said chapter, Mr. Jaffrelot also emphasizes quite a bit on ‘Ethnicization’ of castes to show how each caste is different from the other. It seems he did not come across Dr. Ambedkar’s ‘Castes in India: Their Mechanism, Genesis and Development where the good doctor made this observation:

It may be granted that there has not been a thorough amalgamation of the various stocks that make up the peoples of India, and to a traveller from within the boundaries of India the East presents a marked contrast in physique and even in colour to the West, as does the South to the North. But amalgamation can never be the sole criterion of homogeneity as predicated of any people. Ethnically all people are heterogeneous. It is the unity of culture that is the basis of homogeneity. Taking this for granted, I venture to say that there is no country that can rival the Indian Peninsula with respect to the unity of its culture. It has not only a geographic unity, but it has over and above all a deeper and a much more fundamental unity—the indubitable cultural unity that covers the land from end to end ……

But like all good, committed left-liberals, Christophe Jafferlot chose to highlight the elements which encourage the division of Indian society as opposed to assimilation and integration. So if one is expecting this book to be a text sympathetic to Hindutva they will be highly disappointed.

However to be fair, the book is a decent read for all those wishing to see a different view of the much maligned Hindu Nationalist movement. And Mr. Jaffrelot though ideologically motivated should be credited for providing ample amount of documents in his attempt to score an ideological point.