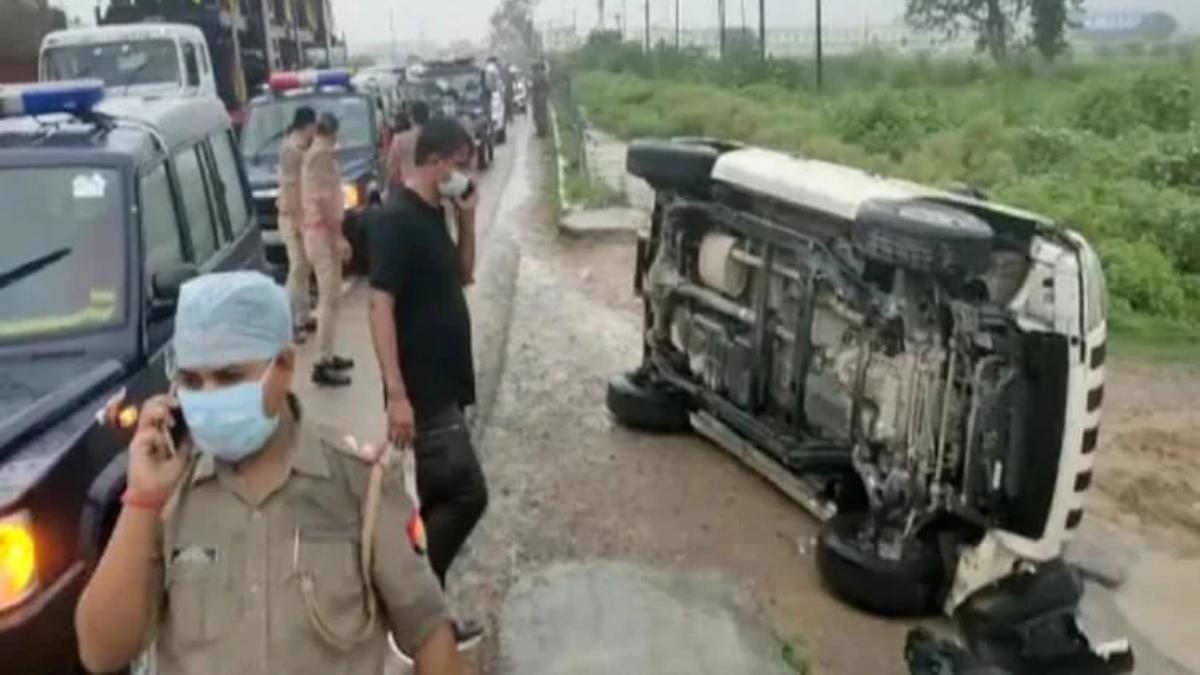 When terrorist Yakub Abdul Razzaq Memon was hanged for his involvement in the 1993 Bombay blasts, as many as 10,000 Muslims attended his funeral on July 30, 2015. (1) The people who turned out en masse on a busy weekday in India’s financial capital had no connection to Memon – they were ordinary Muslims who had come to show their solidarity with a member of their community. It did not matter to them that Memon and other members of the Dawood Ibrahim gang were terrorists responsible for the deaths of 257 innocent Indians. Muslims from distant suburbs like Mumbra and Kalyan traveled all the way to Marine Lines, creating a stampede-like situation. (2) To accommodate the large number of attendees, two funeral prayers were held. (3)

Flash forward to July 2020. When dreaded gangster Vikas Dubey, who was on the run after killing eight cops, was shot dead by the UP Police, his own mother disowned him, his widowed wife supported the police action, and his father said they would not attend his funeral. Ram Singh Dubey refused to accept his son’s dead body and said, “I will not go to his funeral….It is for the good if he is dead. If the police encourage criminals like him, then how will the administration run?” (4)

The ordinary people of Bikru village near Kanpur, from where Dubey ran his empire, expressed happiness at the end of his terror. “It feels like a nightmare has ended. We were in the habit of living in fear,” said Ramphal, a local farmer. (5)

It is clear there are two very distinct groups in India. Let’s talk about the group that always sticks by its members – even those who are criminals and terrorists. This is not a blamegame. Nobody is saying all Muslims support terrorists because that would be untrue. The fact that even in the highly radicalised Kashmir Valley there remain Muslims who back the BJP shows there are Muslims who are proud to be called Indians rather than become citizens of the Islamic madhouse that exists across the border. Such Muslims support the nation despite the huge personal risks they face. Like Wasim Bari, who along with his father and brother, was gunned down by terrorists on July 9, 2020. (6)

However, only Muslims support terrorists. It is undeniable that among Muslims there is a section of people that is highly radicalised or alienated – or both. For, what explains their support for every Muslim criminal or terrorist who acts against India? They idolise Afzal Guru, the Delhi University professor who helped Pakistani terrorists attack the Indian Parliament.

The All India Muslim Majlis-e Mushawarat, the umbrella body of Indian Muslim organisations, declared Guru’s execution was legally and morally unjustified. (7) The Second Shahid Azmi Memorial Lecture held in Delhi called it a “cold-blooded execution”. (8) Politician Asaduddin Owaisi and his followers unleashed a vicious propaganda, saying Memon was hanged for his Muslim identity. (9)

During the recent Delhi riots, the crypto radicals of Bollywood came crawling out of the woodwork in support of the main accused Tahir Hussain. The Aam Aadmi Party councillor had planned the riots with Islamic preacher Zakir Naik, JNU radical Umar Khaled and other unsavoury characters and was seen leading groups of jehadis to kill Hindus and torch their properties and vehicles. (10) Despite ample evidence of Hussain’s culpability, his arrest set off scriptwriter Javed Akhtar’s pro-Islamic tweet: (11)

“So many killed, so many injured, so many house burned, so many shops looted so many people turned destitutes but police has sealed only one house and looking for his owner. Incidentally his name is Tahir. Hats off to the consistency of the Delhi police.” (sic)

Eyewitnesses say Hussain was seen leading 40 to 50 rioters and inciting them on religious lines. The councillor was seen by eyewitnesses as throwing rocks and acid at the Hindus on the street below his building. But for Akhtar and his closet jehadi wife Shabana Azmi, Hussain is almost a revered saint.

According to the logic of these drawing room radicals, the police must arrest a Hindu first, then maybe, or if at all necessary, a Muslim. In fact, Muslims must not be arrested as they answer only to Allah and therefore the laws of the Republic of India do not apply to them. (12) After all, jehad is a permanent obligation on Muslims and by definition it entails disobeying non-Sharia laws. (13)

Each time a Muslim terrorist explodes a bomb and kills innocent people, every time the army kills a terrorist, the media hacks start shedding crocodile tears over the school headmaster’s misguided son who took up the gun. Burhan Wani’s transformation from a killer to a cult figure is primarily due to the work of clickbait journalists such as Barkha Dutt. (14)

Like a broken record, the media keeps trying to reinvent dead terrorists into Robin Hoods. There was Mohammad Rafi Bhat, who holds the world record for the shortest career in terrorism. The Kashmir University assistant professor was shot dead by the security forces less than 36 hours after he became a terrorist. Irony killed itself when The Quint described the man who was killed clutching an AK-47 along with four other heavily armed terrorists as a “humble person who didn’t subscribe to the idea of violence”. (15)

However, the trend setter is The Indian Express which published an article with the title “And they hanged Yakub Memon”. (16)  The title might give a less informed person the idea that Memon was a victim of the Indian judicial system.

Newspapers like the Indian Express and TV channels like NDTV are crammed full of prepaid and postpaid journalists who are constantly creating an image of the scared Muslim and the aggressive Hindu. They are primarily responsible for creating the feeling of victimhood among Muslims. Fake new impacts everyone, but Muslims, who generally live in closed communities in which their mullahs revel in conspiracy theories, are more likely to believe reports which play up the so-called danger to Islam.

Rajdeep Sardesai, the fountainhead of fake news, was shrieking in impotent rage because Chief Minister Yogi’s police had killed a gangster. (17) Barkha Dutt, aiming to taint India at a global level, declared India a lawless country. (18) But the secular media lost its voice when Telengana Police killed all four individuals who were accused in the rape and murder of Hyderabad vet Disha. (19) That staged killing was okay because it was by a non-BJP state.

The missing “school headmaster” in the Dubey episode suggests that leftists and seculars have raised the bar of hypocrisy. When the Kanpur don was killed, did they bother to find out the profession of his father? Was his mother forced to work as a maid in people’s homes? Did he become a criminal because of the reservation system? Lutyens media doesn’t care because Dubey was a Hindu and more importantly an upper caste Brahmin.

To paraphrase Shakespeare’s Merchant of Venice: Hath not a Brahmin hands, organs, dimensions, senses, affections, passions; fed with the same food, hurt with the same weapons, subject to the same diseases, healed by the same means, warmed and cooled by the same winter and summer as a Muslim is? If you prick a Brahmin, does he not bleed? If you tickle them, do they not laugh? (20)

Sorry, your sob story resonates with the media only if you are Muslim. Hindus, and in particular Brahmins, have no rights in India because Muslims being the minority must get special treatment. It’s a different matter that Muslims are hardly a minority; at 250 million they are India’s second largest majority.

Encounter killings are passe – they make a mockery of the law and order system. Instead of developing advanced crime fighting techniques to send criminals to prison for long periods, and making prisons a dead end for criminal activities, the police in India could end up relying on encounters to get the job done. Relying on staged killings to eliminate criminals is the surest way to turn India into a banana republic.

People are celebrating the killing because they know sending hardened criminals to prison is pointless. Well-connected goons are able to perform at near optimum capacity from behind bars. They have access to mobile phones, home food, entertainment and frequent furloughs – unheard of in law abiding countries. Lalu Prasad Yadav, for instance, ran Bihar from his prison cell with his wife in the Chief Minister’s seat.

Kshitij Mohan Singh, an IT professional from Bihar, distils the Dubey encounter coherently in a way no Lutyens journalist ever could: (21)

A common man in a village or tier two town has just a few concerns:

Can I walk on the road safely after 7pm?

Can I take my family out for dinner safely?

Can I buy a small home without being looted?

Can I send my son or daughter to play in the evening without the fear of being kidnapped?

Can I buy a car without paying ransom to the local goon?

Singh adds, the common man sees these changes immediately after a goon is eliminated. Hence he rejoices and celebrates. He feels the changes on the ground. That’s why the entire Bikru village of Kanpur is distributing sweets.

Ask people from Bihar who survived the 1990s Lalu Raj – the biggest example of the criminal-politician nexus. They don’t care about the legalities of the 200-odd encounters in Bihar between 2005 and 2010 under the Nitish Kumar government. All they care about is that a person in Bihar can now go out of his home at 9pm and dine freely in a restaurant, and send his children freely to tuition, evening classes or sports without the fear of getting kidnapped.

A common man cares for the end result, not the means. This may be ethical or unethical. The sentiment may be right or wrong. But that is the hard truth. Anything that delivers justice after years of oppression is celebrated.

7. The Times of India, https://timesofindia.indiatimes.com/india/Umbrella-body-of-Indian-Muslim-organizations-condemns-Afzal-Gurus-execution/articleshow/18419819.cms

20. The Merchant of Venice, https://www.sparknotes.com/shakespeare/merchant/quotes/