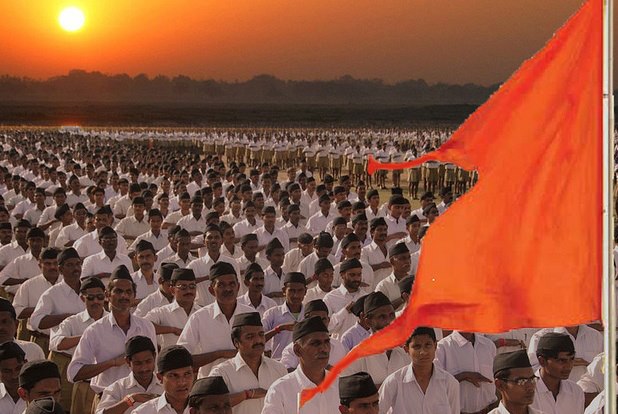 Tavleen Singh of the esteemed Indian Express, whose former editor’s modest reputation is irrecoverably tarnished by Wikileaks revelations, engaged recently in an abusive rant worthy of the worst colonial mindset in it. She is critical of the outrageous distortions of Romila Thapar and the stable of spin masters who have ruled over the Indian historical roost, but descends to grotesque misrepresentation against RSS leaders.

Despite arguing for educational change, Tavleen Singh haughtily repudiates any role for the Sangh in the nation’s education, ignorantly accusing them of ‘bigotry’ and ‘toxic nationalism’.

Tavleen Singh has no idea of the huge educational endeavours of the Sangh itself and those inspired by it. One philanthropic family alone, of mixed Hindu-Sikh origin, has been inspired by the Sangh to sponsor over 1100 single-teacher rural schools in Nepal, where there would only be evangelical missionary activity in their absence.

Tavleen Singh’s barely-concealed class animus about “khaki knickers”, standard Delhi salon, anti-Sangh hysteria, suggests that her erstwhile support for Narendra Modi had more to do with grievances against the Gandhi clan than real approval for him. Having been the recipient of Sonia’s largesse and then cut off evidently provoked resentment.

[pullquote]Scholars like K.S. Lal, Dharampal, Ram Swarup, Sitaram Goel and illustrious names from the past, like R. C. Majumdar and Jadunath Sarkar, repudiated by India’s Left historians as communal and unworthy of study[/pullquote]

Tavleen Singh’s own account in her book Durbarof the social mores of the Rajiv-Sonia duo and their circle indicated their paucity of any culture and sophistication, dominated instead by an overweening sense of entitlement. Rajiv Gandhi’s dastardly crime of inciting violence against innocent Sikhs is apparently not quite as reprehensible as alleged ‘khaki nationalism’ on the issue of educational reform.

Tavleen Singh also appears to have overlooked the fact that the Modi she supposedly admired, as well as the newly-elected, CM of Maharashtra, Devendra Fadnavis and others leading the nation, are all proud products of the khaki brigade. They express nothing but gratitude for their political socialisation within it. It is this noble brigade of the sons and daughters of India, nurtured in an alleged intolerant tradition, which is currently straining to rescue the country from a bunch of virtual brigands.

In my own personal interaction with those she airily denounces for ‘bigotry’ and ‘toxic nationalism’, I have never heard them utter anything remotely suggestive of such attitudes. Indeed one could more convincingly criticise the Sangh for excessive Gandhian tolerance and deference to an unspoken social democratic egalitarianism.

[pullquote]Tavleen Singh’s anti-Sangh hysteria, suggests that her erstwhile support for Narendra Modi had more to do with grievances against the Gandhi clan than real approval for him.[/pullquote]

My own perception was that their unusual organisation prowess was not matched with an equal modern professionalism though Sangh adversaries might note, this shortcoming has been effectively addressed in recent times. My abiding impression of its leaders and countless ordinary activists is an artless love for their country and an absence of hate and anger. On the contrary, it was my secular rage against innumerable injustices that was sublimated, through association with the Sangh, towards cognition of a more patient long-term venture of renewal, a truly life-changing experience over two decades.

Tavleen Singh’s ideas of so-called ‘culture’, etc. are not elaborated with any specifics and substance except to plead that Bharat’s premier cultural organisation should have no role in their renewal. Without its presence since 1925 precious little of this heritage,which she only hints at, would have remained to renew. It has been grievously damaged by philistine robbers ensconced in Lutyens Delhi, a tribe for which she evidently harbours obscure socio-cultural empathy. These were the same ‘perfumed’ assassins who presided over the ghastly Delhi pogrom of 1984, while the alleged toxic nationalists took to the streets to offer succour to its victims.

In a bitter irony that instigates my own personal secular rage, alleged supporters of the victims in New York of Delhi’s 1984 pogrom are petitioning to blame the very people who sought to protect them from harm. These disgraceful individuals cooperate with Pakistani ISI operatives and a notorious New York lawyer, who has made harming India his life’s principal ambition.

[pullquote]Modi  as well as the newly-elected, CM of Maharashtra, Devendra Fadnavis and others leading the nation, are all proud products of the RSS.[/pullquote]

I did not notice any ringing denunciation of it in the Indian Express from Tavleen Singh. But her subliminal anxiety over Hindu self-expression, by ignorantly abusing their principal organisation, only reveals anxiety that any Hindu revival should be scripted to ensure the privileged lifestyle she enjoys is not troubled.

There is always in the anxieties and self-interested pleading of India’s Anglo elites a pretence of familiarity with European culture. This provokes derision in Europe’s cultural elites who scorn as absurd the pathetic desire of upstart natives for unwarranted familiarity. Much of what is imitated by India’s half-educated and unread Anglo elite is subterranean European popular culture, which upper class Europeans shun. Some exceptional non-whites are admitted to the exclusive club, like the formidable V. S. Naipaul, significantly, not an icon of secular-minded Indians. But he himself is somewhat sympathetic to the alleged purveyors of alleged ‘toxic nationalism and ‘bigotry’.

Having observed these superior beings in Europe rather longer than most, I concluded long ago that the slightest challenge to their ethereal sense of racial and cultural primacy instantly prompts a Nazi-like murderousness within them.

These are the same abominations quietly acquiescing in or actively supporting genocide across the contemporary world, the Middle East and Africa, most of all. I remind myself they are the children of parents known to have increased the volume playing Mozart and Haydn’s music to drown the screams of the young and old being roasted in gas chambers. This is presumably an expression of the ‘high culture resonating in civilised countries’ according to Tavleen Singh’s rant!

The Sangh and its parent organisation have in fact not alluded to anything profound or original though paying attention to their plea for change in India’s education could result in both.

But let me digress momentarily to contextualize their grievance. Within a decade of independence, the Indian social sciences and history, most of all, were the victims of a determined and concerted campaign of infiltration by a real fifth column, which she identifies totally inaccurately with the Sangh instead. The phenomenon has become known in contemporary political parlance as ‘entryism’. The Left began a project of anti-national subversion by re-writing and fabricating Indian history and promoting a divisive social science research agenda to magnify any and every fault line of Indian society. It was really the colonial agenda of divide and rule, which they hoped would prevent the majority from ever consolidating their cultural and historic identity.

But they were too mediocre and suffered from an excess of hubris to succeed. The Indian Left was largely an instrument of the British intelligence services, which sought to use it to thwart the Indian independence struggle during WWII. As the Left’s project to subvert independent India faltered under its own contradictions and the innate good sense of Indians prevailed, they made common cause with evangelists and Jihad. It is this villainy that has been smartly reined in by the recent successes of the BJP, for which countless anonymous Sangh activists can justly claim credit.

The Sangh and its leaders have never sought the prerogative of rewriting Indian history. Yet it unequivocally needs to be rid of the endless unscholarly diatribes against anything that suggests that Indian society also has its merits. There is no other country in the world where the publicly funded academics and media are obsessed with a diabolical project to undermine the nation by maliciously deconstructing its heritage and culture. The Sangh rightly wishes alternative scholarship to be taken seriously and hopes for a more balanced view in the educational curriculum.

Relatively contemporary scholars like K.S. Lal, Dharampal, Ram Swarup, Sitaram Goel and illustrious names from the past, like R. C. Majumdar and Jadunath Sarkar, repudiated by India’s Left historians as communal and unworthy of study, would offer this alternative perspective.

More to the point is the need to sponsor a renaissance within the Indian social sciences that eschews the pipedreams of turning India into an Albanian or North Korean-style collectivist nightmare. It would be a venture that gave priority to examining the civilizational underpinnings of harmony, which Deendayal Upadhyaya stressed, rather than innate and interminable and conflict.

The hard faced leftist gatekeepers of Indian social science and history have simply deterred potential scholars, whose efforts might affirm aspects of Indian society, insisting on denouncing its greatest icons, like Shivaji and Guru Gobind Singh as mere bandits. The neo-colonial, Anglo-American Cold War project to subjugate India once more by undermining its sense of self-worth, with the collusion of sepoys and coolies in publicly-funded Indian academic establishments, would then be consigned to the dustbin. And also end with it the peddling of egregious slander in third-rate media outlets.