Condemning neutrality is a terrible way to build consensus 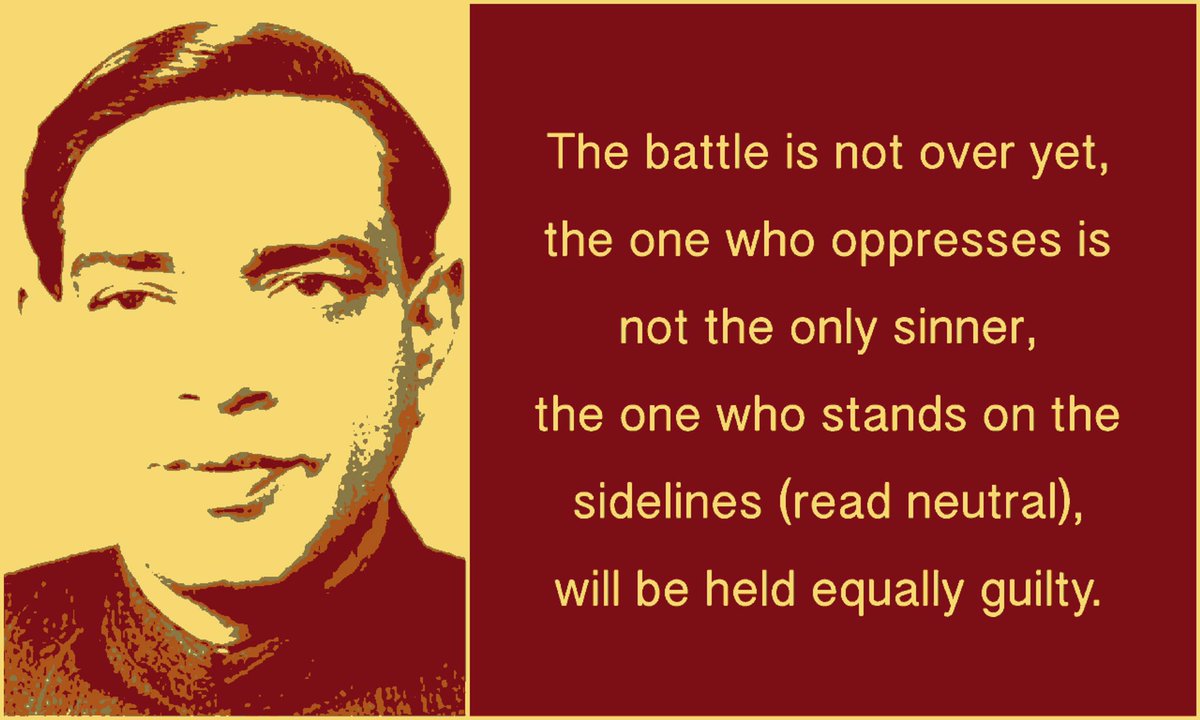 If you are active on social media and broadly fall to the right of the Indian ideological spectrum, chances are that recently either you have used or know someone who has used this poem by the late Ramdhari Singh Dinkar to shame (for want of better term) those who choose to stay neutral in time of peril. (The landmark battle going on in the Supreme Court over the Sabarimala temple is the most recent example)

Upon applying some thought, it becomes fairly clear this assertion that those who remain neutral in this battle too will be deemed guilty by history, is doing more harm than good to the movement and an analysis of this on the basis of first principles might be in order.

I tried to find more context to this poem and was not able to. My own limited knowledge of Hindi aside, as the late Jaiprakash Narayan had quoted the same poet’s “Singhasan khali karo, Janata aa rahi hain” to a crowd of some one lakh people at the Ramlila ground, I am assuming even this poem was either explicitly inreference to, or had relevance to the emergency imposed by Indira Gandhi led Congress government in the seventies. Here is one of the first reasons why many present day applications of this poem may lack the same effect as it did back then. Matter of fact is, no matter how grim things look to you at present, we are not in a state of declared emergency. Your claim of undeclared emergency may sway a few, but for many of us on the centre of the spectrum that sounds like the chicken and sky is falling story.

Coming back to the argument that neutrality in itself is a crime, here are some reasons why it must be used most sparingly and why it is unfair in almost all ordinary circumstances (and no, the situation today doesn’t qualify as extraordinary)

There are many causes, a few of them beyond scope of this article. However, as I have said earlier, faulty communication and lack of mass appeal may be the two most common one. However, there is another reason that is completely avoidable and yet it is causing many sympathizers not to vocalize their support on certain issues.

Around 2016, I had become interested in the movement for Universal Basic Income. While I had not made up my mind about (I still have not), I thought this was a movement that needed a patient and thorough hearing. Soon I began to follow an American journalist named Scott Santern as I found him to be the most exhaustive source of information about UBI on social media. However, soon after Donald Trump’s victory in the presidential elections, Mr. Santern’s feed, like many on the American left, turned almost exclusively into a monotonous rant against the President. At one point, opening my twitter feed and reading 10 tweets about Trump for one tweet on UBI started to sound like an unfavourable deal and I unfollowed him.

I was reminded of this when a few of my acquaintances told me in confidence that one of the reason they were in two minds about vocalizing their support for the #ReadytoWait movement online was their unease with a couple of its prominent activists and their hostile attitude towards supporters of Maharashtra CM Devendra Fadanvis. I myself remember being called member of “save the Dave” gang for calling out false propaganda about the Maharashtra CM a few months ago. Even though I opined that character of individuals should not get in the way of cause, the hesitation in throwing weights behind activists who harbour extraordinary amount of animus towards us is completely understandable. Now, either you can go back to Ramdhari ji’s poem and accuse us of being petty and failing our duty to dharma, or you can introspect and ask- do I want to be known as someone with an opinion about everything or as someone with an impact on something? If your purpose is merely to be the self-appointed conscience keeper and examiner of purity for the society at large, then more power to you and you can keep spreading yourself thin. However, if you wish to move one step up and use social media to build consensus and support behind a cause, then I am afraid you will have to be circumspect with your choice of battles and guarded about your tone.

Lastly, in these strangely intersecting times, the people indifferent to your battle today might be your most passionate comrades-in-arms in a different battle on a different battlefield tomorrow. If you are serious about your cause, you ought to learn not to let your frustration destroy possibilities for future.  Dwight D Eisenhower once said “you don’t lead people by hitting them over the head- that’s assault, not leadership”. As the Supreme Commander of the winning army in the most elaborate theatre of war the world has ever seen, he ought to have known what he was speaking about.