What constitutes the idea of abuse of Yoga? 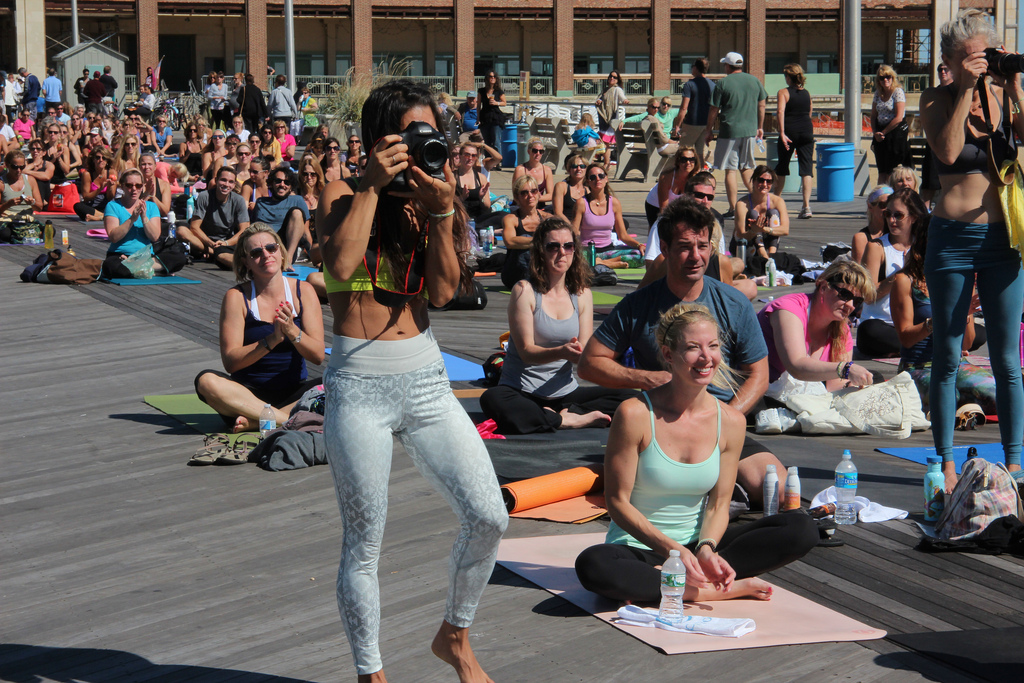 There is a system of “Yoga” wherein a woman lays down on a yoga mat without her bottom in a completely relaxed position, before a “trained person” who then massages her clitoris and other parts of vagina. Another form of “Yoga” includes performing “Asanas” (postures) while drinking a bottle of bear. A little less absurd is a type of “Yoga” where one wears absolutely nothing – is nude – while performing the various postures. There is also “Rock Yoga” wherein you perform postures to rock music. A great many of the “conventional yogic admirers” find such kinds of acts not just stupid and downright nonsensical but even blasphemous!

Conventionally “Yoga” is thought to be a set of exercises that tone the body and relax the mind. Most often than not, the“best Yoga gurus”, or so called “Yogis” (male) or “Yoginis” (female), are those with perfectly toned beach bodies. Yoga then becomes a system employed by anyone seeking to become attractive as well as desirous of having carnal pleasures. The most sought after “gurus” can perform the perfect headstand, handstand as well as flex their body as if without bones. Is this truly what constitutes Yoga? Let’s have an objective look.

The Sanskrit word “Yoga” comes from root word “Yuj” which essentially means path. Yoga is then a path. The Yoga as you know it – i.e. of Asanas (postures), Pranayama (breathing exercises) and Dhyana (Meditation) – is essential a small component of larger part of yoga called Astanga Yoga.

The objective of Yoga is to prepare the mind and body to achieve the objective of Paramartha. Param means Supreme and Artha means Meaning or, also, Wealth. Artha also suggests Truth. Yoga is then the path taken in order to achieve the supreme meaning or supreme wealth of life. The supreme objective or meaning of human life according to Vedic knowledge is Sukham or happiness. Yoga further makes the distinction between happiness which comes at the cost of another’s happiness. In the Yogic context happiness is the result of self-awareness, acceptance as well as working towards a greater good. Yoga is the path of Dharma. Dharma essentially means any thought, action, institution as well as path that sustains Sukham of all beings – not just humans. By this one sustains not only themselves and the present forms of life and but also future life that can arise, as an inclusive harmonious environment is created for all.

Astanga Yoga – the Yoga as you know it – is just a small portion of the greater Yogic tradition whose work is to prepare one’s own body and mind for the greater objective of life. Astanga Yoga includes yama, niyama, asanas, pranayama, pratyahara, dharana, and finally samidhi. It is an 8 step program with the eventual goal of enlightenment or self realisation.  It starts primarily with the body and mind as nothing in life is possible without having a healthy mind and body. Ayurveda (sister Vedic science pertaining to health) suggests that healthy mind leads to healthy body. So, mind is the crucial element that supersedes even the body. But it is not easy to control the mind. Controlling the mind essentially means enabling it to be balanced even in dire situations. Mind control in Yoga is not to control people and objects as per your whims and fancies, rather it is a process of ensuring happiness and peace at all times. It is neither delusional nor a technique of self-aggrandizement. Vedic Rishis (sages) were the first known beings to have propagated the fact that Happiness isn’t in objects – but simply a state of mind.

To achieve that state of peace and happiness in mind they prescribe practicing Vinayam (subtly translated as humility). Humility is not inferiority masquerading as a virtue; it is in fact acceptance of the idea that each person is a reservoir of immense potential with time, opportunity and circumstances being defining factors in a person’s success. Humility is also respecting others for their opinion, views, and achievements without demeaning, loathing, insulting or envying them. However, it is neither slavery nor servitude, but comes from respecting self as well as others.

Most people would say if we are men of immense possibility why do we suffer and often fail to realize these possibilities in our lives. The answer lies in the Arishadvargas. Ari mean six, Shad means negative and Vargas mean qualities. They are Kama (lust), Krodha (Anger), Lobha (Greed), Mada (Ego) and Matsarya (Envy). Any action taken with the Arishadvargas being the defining motive or emotion leads one astray and eventually yields misery. Therefore, to be true to one’s Dharma one has to be on path of Yoga – i.e. path bereft of Arishadvargas. A path can seldom be Yogic unless there’s humility.

So to be true to Yoga, any action should be bereft of not just of Kama and Krodha which the likes of Clitoris, Beer and the Rock Yoga consist of, but also Lobha, Moha, Mada and Matsarya.

If you look at the conventional self-styled “Yoga Gurus”, “Yogis” as well as “Yoginis”, how could they be on path of Yoga if they flaunt their bodies and indulge in acts of criticism (which is result of Matsarya), publicity (resulting of Mada and Moha), while charging exorbitant fees (resulting of Lobha)?

Further, if one is described as a “great Yogi” just by maintaining a perfectly toned body, head & handstand and the like – can’t gymnasts do a better job? Given this are gymnasts to be called “Yogi” or “Yogini”? Why not go to the gym instead of Yoga Studios?

I’m not saying that all Yoga propagators and preceptors are ignorant of yoga. If I say that I too am on the path of Matsarya, instead my reasoning is that knowing the essentials of Dharma and Yoga, each individual is then free to determine for themselves as to who is a Yogi and who is a Bhogi.

Bhogi is the antithesis of Yogi. While Yogi maintains detachment (not to be confused as being bereft of love) and is at eternal peace with a perpetually happy mind; Bhogi is one who is addicted to worldly pleasures and in every way manifests the Arishadvargas. Bhogi thinks about the loss of his possessions or sources of pleasure and lives in fear and insecurity, he abuses his body, and turns eventually turning into a Rogi (diseased) being before meeting a distraught death.

Here is a talisman provided by Krishna to Arjuna in Bhagavad-Gita that sums up the essence of Yoga “When you perform your duties and abandon all attachment to success or failure with an evenness of mind it is called Yoga.”

The article has been republished from Vedic Management Center with permission.