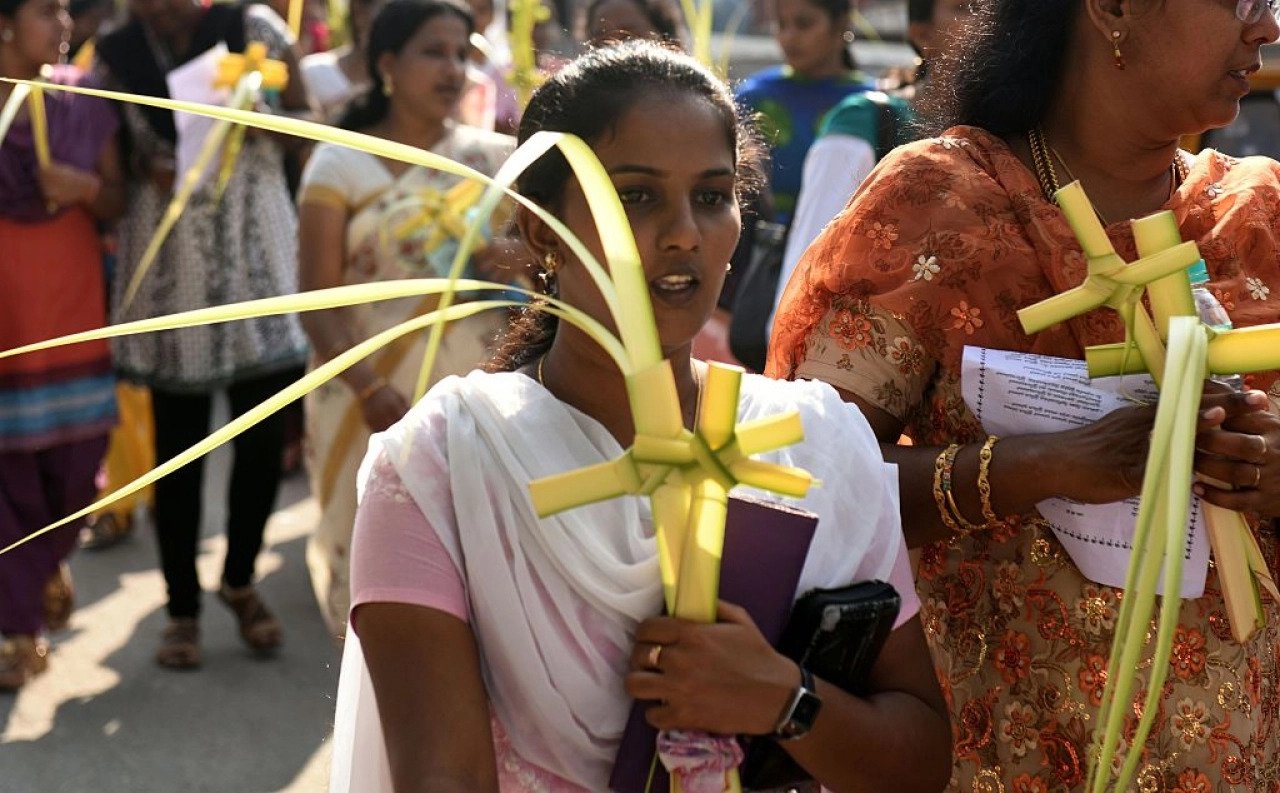 Pseudo-atheism, the kind of atheism seen in Tamil Nadu, proves to be an effective smokescreen to obscure ulterior motives. However, this needs another smokescreen behind which to hide itself, and that is the “discerning intellect,” which purports to eradicate superstition! This pseudo-atheism and discerning intellect form the cornerstone of the Dravidian ideology formulated by E.V. Ramaswamy Naicker (EVR). For a quick insight into its tenets, this ideology holds, “There is no God” and tags it on with, “God is a scoundrel.” Anyone who questions the logic, “How can a non-existent entity be a scoundrel, or even a noble being, for that matter?” is but a “backward-looking, superstitious moron” deserving to be done to death! However, it must be noted that all religions other than Hinduism are exempt from this no-God promulgation, and all its “intellectual tag-ons!”

The credit for tirelessly propagating this ideology, through eclectic means, goes primarily to two Dravidian parties of the 1940’s, still alive and kicking–The Dravida Kazhagam (DK), founded by EVR, and the Dravida Munnetra Kazhagam (DMK), founded by C.N. Annadurai, who also went on to become the Chief Minister of Tamil Nadu. However, following his demise within a couple of years in office, he was succeeded by M. Karunanithi as not only the second but so far the last Chief Minister of the DMK. Some break-away factions and new formations of the later years also partake of this Dravidian ideology.

Karunanithi, the intellectual disciple of EVR, was out of power seven times. It was his obstinate anti-Hindu policy that worked against him, to a very large measure, if not to the full. He was no idiot not to realize that, nor was he a blindfolded loyalist to any ideology or principle that he knew would keep him out of power. Even among his family and folks, most members are open and devout followers of Hinduism, while those in active politics are undercover followers. In fact, by choosing the yellow shawl for his own shoulder, all of a sudden, in the twilight years of his political life, when things were going increasingly awry for him, he went past all those Hindus who believe in religion but not in astrology, or rather, superstition in his terminology! Yet, he could not break free of this ostensible anti-Hinduism. However, his hatred of Brahmins was real despite the fact that he wanted Brahmin Priests and Sanskrit Mantras for rituals in his home, and the fact that he had a clique of Brahmins as his most trusted consultants. Joining these dots not merely exposes the Dravidian hypocrisy, but more importantly underlines the role the DMK plays in matters of religion and Temple management.

It is hard to see in which way the DMK is not a secret agent of the Christian missionaries committed to conversion. First of all, its hatred of Brahmins is reminiscent of the same hatred exuded by those missionaries who see Brahmins as the guardians of Hinduism, and therefore a formidable impediment to their mission. To remove this impediment as a first step, the DMK comes to their aid. If anybody has put the now debunked, ever malicious Aryan Invasion Theory (AIT) to the best use possible, it is the DMK and the DK. It is perhaps the kind of use which even the inventor of the theory could not have thought of! These outfits labeled Brahmins as “Vandherigal” (Those who came and settled) and tactfully imputed all the sufferings of the masses to the presence of these Vandherigal on their homeland. In that way, they laboured the Vandherigal theory to the masses who would have otherwise been, as they were in deed, least concerned about such a triviality, even if true! They drilled the hatred of Brahmins into the collective mind of the masses so deep as to make them forget their real problems! Besides instigating violence against Brahmins and shielding thugs, these outfits vilified Brahmins in a number of ways and cleared the field for the missionaries.

Moreover, since the AIT, there has been a host of other dime-a-dozen theories targeting Brahmins, corrupting Hinduism and largely orienting themselves toward the core of the Dravidian ideology. According to one theory, Hinduism is an offshoot of Christianity concocted by cunning Brahmins to establish their supremacy. According to another, any eatables offered by Brahmins, even if friends, are forbidden because such eatables are “Prasadam” slyly infused with evil powers to spell doom on consumers! Most important, the prospective converts must be forewarned about this evil so as to have them shielded! And, the neophytes go overboard drumming around a boatload of such “community welfare” theories to save the community from the “wicked Brahmins.” Even in a casual conversation, at times when they cannot help uttering a word or two, in a positive light about some of their Brahmin acquaintances, they impulsively attach the tagline, “‘In spite of being Brahmins, they are good people!” Besides all these, Christian clerics are known to make favourable comparisons between Karunanithi (later his son, Stalin too) and their Lord Jesus, especially around election times!

Next, in its falsification and vituperation of Hindu Scriptures and Shastras, the DMK becomes the mouthpiece of those missionaries. In the publications of the DK and the DMK, perverted versions of popular episodes from the Ramayana and the Mahabharata form the centerpiece. Such publications used to come out in print, but now, they are available both in print, and online, and are supplemented by many more of their ilk on social media. Sanskrit Mantras are profaned as obscene utterances with which the Brahmin Priests are swearing and cussing at the naive, Sanskrit-ignorant, non-Brahmin devotees during Archanas and Poojas. Further, the DMK would not spare anything that it can lay its hands on. In the Tamil Nadu State syllabus–Samacheer– Social Studies was altered to include more of anti-Brahmin sections; why wait till they grow up, let the children get drunk with the anti-Brahmin poison in their childhood itself so that the missionaries may have less to do with them in the future!

These missionaries dispatch teams to villages and brainwash the poor inhabitants. First, they harp on such malicious theories as the ones outlined above, and some more, improvised to befit the moment. For instance, if they spot someone with “Vibhudhi” (Thiruneeru in Tamil) on their forehead, they may say, “You are suffering because you have been enchanted with ash. It might have happened long ago. These Brahmins employ several means to enchant people, and some of those means take time to take effect. So, the first thing you ought to do to save yourself is to stop wearing that ash, stop going to Temples, stop worshiping idols…!” Next, they entice their targets with incentives of cash and various other things including promises of jobs in the government sector–the higher the social or economic standing of the target, the higher the offer! Thus, it is a push-and-pull approach made up of an irrational fear and hatred of Hinduism interspersed with the love and concern of Christianity! If, even after all such desperations, they fail to convince, say, one member of a family, they round up another; that is, they will not take no for an answer. They would then preach on how the rest of family and the society would criticize and oppose…, and why it is essential to remain steadfast! However, the takeaway from all this for the DMK is the conversion of a large group as its vote bank.

While the villages bring such tidings, the cities seem to dispel the myth that it is only the poor that get converted. In this case, the stakes may be higher, but the missionaries do not seem to be put off by that. Just a casual look at the Kollywood alone is enough to understand this, as the movie industry is arguably the richest, or among the richest industries, in any city. Many leading actors, directors, producers, etc., are either converts or pseudo-atheists crying for some limelight. What is bizarre is that many of them convert after shooting to fame and riches, which means that the argument that they merely succumb to some offer of opportunity, like someone clasping at straws, does not hold water! The screenplay, dialogues, lyrics, or the entire storyline of their movies mock, belittle, and ridicule the Hindu faith. These matinee idols set up a cascading effect as they have a large following full of fanatics. And this is probably what gives the missionaries their money’s worth and turns out to be an irresistible invitation in spite of the high stakes involved! Movies reverentially themed on Ithihasams or the lives of Saints and Sages have long since become water under the bridge. The highly filtered, falsely laudatory movie on EVR was made tax-free, by his disciple, Karunanithi. Derision of Hindu practices or mockery of Epic characters, even in social movies, as in dream scenes, seems to have become the de rigueur for what they call comedy. Anyway, every new instance of conversion, or even orientation toward the pseudo-atheism, is a fresh investment in the DMK vote bank.

Further, the temple management under the DMK regime leaves a lot to be desired, to say the least. First, several high-ranking positions in the Hindu Religious and Charitable Endowment Board were filled with non-Hindus. Many officials who bear Hindu names are the typical pseudo-atheists or converts who have retained their Hindu names in part. Unlike in the past, the modern trend (which has been around for quite some time now) in conversion is to add a Christian name to the Hindu name (rather than change it altogether), a well-thought-out contrivance to camouflage identities. Such arrangements ensured that the temple routines were grossly messed up flouting the customary Agama norms, which are thankfully held in place by the priests, at least to the extent that lies within their power. In a number of temples, the daily poojas, and the daily and periodical maintenance activities were either reduced in number or oversimplified for no obvious reasons, or completely removed as good riddance. However, whether they were also removed from the books is a different question, not to be asked! Several temples lie in utter dereliction. Murthis vanished into thin air. What adds to the intrigue is that these Murthis had remained through the Mughal and the British onslaughts. Temple lands were let out on a 99-year lease. Who the beneficiaries are is of course an open secret! Those officers who refused to play ball with their higher-ups, on any issue, were penalized forthwith.

Further, thousands of churches sprang up at various places, including temple lands, across the state. At some places, even Christian graveyards can be seen abutting temples. It is then no surprise that the temple lands kept shrinking and the churches kept mushrooming. Besides the regular churches, there are the “prayer towers” which do not resemble a church per se in their outward appearance. The advantage with these outlets is that they can be tucked away in a cluster of buildings, which will keep them unobtrusive. However, all these establishments serve one common purpose. They toil, night and day, to both widen and deepen the outreach of their conversion mission. For centuries, Tamil Nadu has been known as the land of temples. There are 44,121 ancient temples, belonging to different time periods, according to Government figures. But a tour of the state today leaves one wondering whether this land of temples is in a race to become the land of churches! Conversion promoted by political power play seems to have added multiple dimensions to the whole process. Each new discovery of events connected with it seems to suggest that the discovery made so far is perhaps the tip of the iceberg!