Cordel Church Scam: Another Can of Worms? 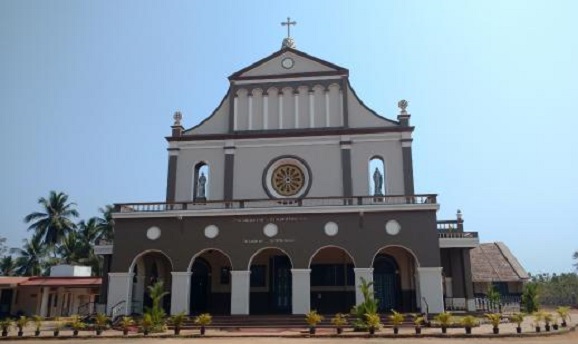 Holy Cross Church, Cordel, Kulshekar, is one of the big churches of Mangaluru diocese. Recently, it has been in news for all the wrong reasons.

A mega scam reported from here has shaken the conscience of the Christian laity. For the first time ever lay Christians have taken to streets to demand justice from the clergy. Though their ‘prayer’ before the Bishop for justice and reimbursement of the misappropriated amount has heeded very little response from the big boss till now.

The reason is obvious – a mega scam of this magnitude could not have happened without the sanction of the Bishop!  However, the faithful can only ‘hope’ for justice from the Bishop as they can’t do much beyond that since the system that is in place has only limited scope!

What exactly is the scam?

Padre Valerian Pinto was made parish priest of Cordel Church in June 2008 for a term of seven years. As soon as he assumed office, he planned 21 projects to be constructed within the Cordel Church premises and collected huge sums of money from the general public. But, the money so collected was not used for the said purpose and instead was siphoned off to his personal accounts. Duplicate bills and vouchers amounting to more than five crores were forged. He maintained parallel bank accounts and the funds collected were remitted to these parallel accounts instead of remitting them to the main account of the Church.

The money collected from the public was also diverted and invested in land, shares and other assets apart from hoarding large amounts of cash. He invested the collected amounts on lands in benami names, including in name of his own brother. Despite incessant demands from the Church members, the complete details of the total money collected and the expenditure incurred was never revealed.

Apart from the project money, he had also misappropriated from other fund collections of the church like the rent from the Cordel hall, grave reservation charges of the burial ground, permanent fund of the church, etc. He had embezzled around 20 lakh rupees from the church corpus account, and another 10 lakh rupees from promotion of education account of St Joseph high school.  Cordel hall and Frad Saib hall accounts had huge amounts. A big share from this appears to have been siphoned off as well apart from keeping these accounts outside the audit purview. Electrical and plumbing contractor as well as the Civil Contractor of the projects appears to have joined hands with the Padre in forging documents for embezzlement. Padre Anil Lobo, the assistant parish priest at the Cordel Church may have also played a role in forging the documents.

The Bishop being the religious head of the Church, who appoints the Padres [priests] in various Churches and has a religious control over them turned a blind eye to the crimes of Valerian Pinto and may have received a share in the misappropriated money from him. The fact that the Bishop voluntarily returned Rs. 15 Lakh to the Church from the misappropriated money further points towards his involvement in the scam.

On the forceful and continuous demands by the faithful, a five member Commission of Enquiry was constituted by the Cordel Church. This committee after a painstaking inquiry and verification of accounts found the Padre guilty of misappropriation.  Bank account statements of MCC bank, Corporation bank and other banks speak for itself about the financial manipulations by the Padre.

Padre Victor Machado, the current Parish Priest of Cordel Church had announced during the Sunday mass in July 2016 that Padre Valerian Pinto has been proven guilty of misappropriation by the Commission of Enquiry. The guilty Padre had apparently admitted to his guilt and had apologized in writing and assured to pay back the amount. But no signs of recovery of the swindled amount has appeared so far.

This is only a tip of the iceberg. If a custodial interrogation is made by the police, more information about the nefarious activities of Padre Pinto and others would come to light.

Towards this end, I had filed a criminal complaint (case number- PC NO 75 / 2017) before the II JMFC court of Mangaluru demanding police investigation into the issue, in which I had named eleven persons as the accused, including the Bishop. An order from the court on my appeal was supposed to have come on April 20, but was first adjourned to April 24, and then was again adjourned to May 2. It remains to be seen whether the court will finally order a police investigation into the issue on May 2 or will there be another adjournment.

Documents pertaining to the Scam can be accessed here: Cordel Church Scam