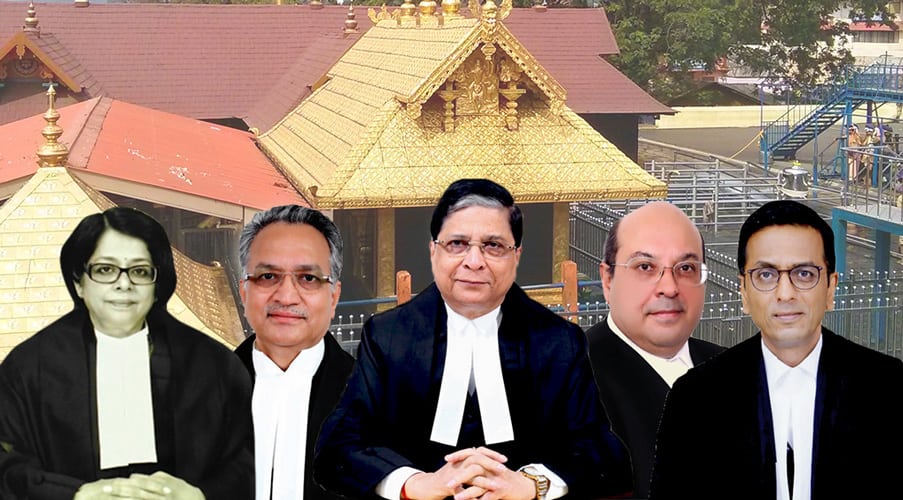 The Court finally disposed the Sabarimala case ruling that all women can now enter the temple. Reason given by the 5-Member bench of Supreme Court is that Article 25 of the constitution guarantees freedom of conscience and free profession, practice and propagation of religion. Additionally according to Article 14-15 of the constitution, State shall not deny any person equality before the law or the equal protection of the laws within the territory of India and prohibits discrimination on grounds of religion, race, caste, sex or place of birth. This ruling comes with a 4:1 majority which means that 4 Judges ruled in favor of allowing women to enter Sabarimala and one judge was in favor of preserving the tradition and sacredness of Sabarimala.

Hon’ble Justice Indu Malhotra was the sole Judge on the bench who gave the dissenting judgement. She said that this petition should not have been entertained in the first place. While pronouncing her judgement, she said that “In matters of religion and religious practices, Article 14 can be invoked only by persons who are similarly situated, that is, persons belonging to the same faith, creed, or sect. The Petitioners do not state that they are devotees of Lord Ayyappa, who are aggrieved by the practices followed in the Sabarimala Temple. The right to equality under Article 14 in matters of religion and religious beliefs has to be viewed differently. It has to be adjudged amongst the worshippers of a particular religion or shrine, who are aggrieved by certain practices which are found to be oppressive or pernicious.” She also clarifies, “Sabarimala temple is bound by Article 25 of the Constitution. And it is not tenable to examine this religious matter only through Article 14”.

However, by a majority of 4:1 entry of women to Sabarimala has been allowed. Without casting any aspersions on the decision of the country’s highest court and accepting the same, let us consider the repercussions of this verdict

According to Justice Chandrachud, no one should be denied their rights based on their bodily attributes. This means that not just women, but anyone can go to Sabarimala. This also means that women can visit even during their menstruation.

In effect, saying anyone can go there, is akin to equating Sabarimala temple to a mosque or a church. People may even romanticize this saying that this verdict reinforces the notion that “All are equal”. Fact of the matter is that temples are not like mosques or churches and hence such comparisons are irrelevant.

The reasons are highlighted here

If anyone can go to such altered Sabarimala, why do you even call it Sabarimala? Why don’t we call it St Mary’s church? The sacredness of Sabarimala is observance of 41 days of religious vow before we go a pilgrimage. Isn’t it unholy if you don’t observe the basic requirement and visit the temple? The essence of the judgement is Right to Religious practice and Right to Worship guaranteed by the Constitution under Article 25. Will someone who has had a bereavement in the family be allowed into the temple if he says: “Agreed I am not supposed to visit any temples during the mandated mourning period of 11 days, but I have rights under constitution to worship”?

Menstruating women will now be allowed to enter the temple. We may also have to allow someone claiming that they have breathing trouble hence cannot bathe every morning for 45 days, and also cannot carry the ceremonially prepared Irumudi Kettu, yet want to ascend the 18 holy steps and have a darshan of Lord Ayyappa. Won’t this affect the sacredness of the place? Even Lord Ayyappa may lament being seated there.

Historically we find such examples during Tipu’s rule. This perverted ruler Tipu used to instruct his people to throw pieces of cow’s meat (Beef) into the temples to mar the sacredness of the place. The idea behind this was to ensure that people would avoid visiting temples out of disgust thus letting it fall into ruins. The only difference is that this perversion has made its appearance in a polished form. Any blood is considered unholy for the temples. Will the sanctity of the temple be maintained if menstruating women visit temple? This is the question that the verdict raises.

Kerala recently witnessed massively destructive floods. Few thousands lost their lives and many are missing. Thousand others have lost their homes and belongings and are left with almost nothing. Rivers that rose and caused this destruction are River Periyar and River Pampa. This may not stand test of logic or even be mocked by others. Whether it is coincidence or God’s wrath is a conclusion left to the reader. Aren’t these river that flooded the state emerging from the ranges of Sabarimala? It flows down from these mountain ranges. Yet should we still think there is no relationship between the demands for women’s entry to Sabarimala and floods?

Is it enough to accept the verdict to allow women into Sabarimala? Aren’t other logistics and arrangements necessary? In a case Travancore Devaswom Board vs State of Kerala, High court has endorsed the Central Government order disallowing felling of trees or erecting any permanent constructions or engaging in any new constructions in Sabarimala. It is to facilitate unhindered access of the path and free movement of wild animals in the forest range. Some the existing structures have been ordered to be demolished.

When there is a ban on construction activities, how can the facilities like rest rooms, lodging for women be arranged? Do they have to file another Public Interest Litigation and wait for years?

Not many in India may be aware that there are 5 temples of Lord Ayyappa in Kerala. It is believed that all the five have been built by Parashurama. These are temple for Ayyappa

These are not merely temples but a reflection of the 5 phases of life. All these temples permit women to worship. It is only Sabarimala that had prohibited entry of women. Since it was in a very important phase in life, there are a number of restrictions.

Why then, did the Muslim who filed this Public Interest Litigation specifically in respect of Sabarimala, disregard other temples?

It is probably for this reason that Justice Indu Malhotra observed that unless a community’s problem is brought to court’s attention by believers from same community, courts should not entertain or intervene. Her dissenting judgement also is an indication that she was aware of the intention being this PIL.

There was a verdict allowing touching of the Idol in Shani Shinganapur. Apart from Trupti Desai, very few ladies visited that place till date. When my Mother who is a regular temple visit devout person as to when she was going to Sabarimala, she replied, “Why should I nullify the merits of my worships and temple visits so far by visiting Sabarimala where the age old traditions and customs have been violated? There are other temples. I will go and pray there”

Even in case of Sabarimala, it would be similar. Those who are real devotees will wait. Others will gloat saying we were victors in the court.

Finally, the moment Sabarimala became Sabarimala case, God has been violated. I leave it to the women now!