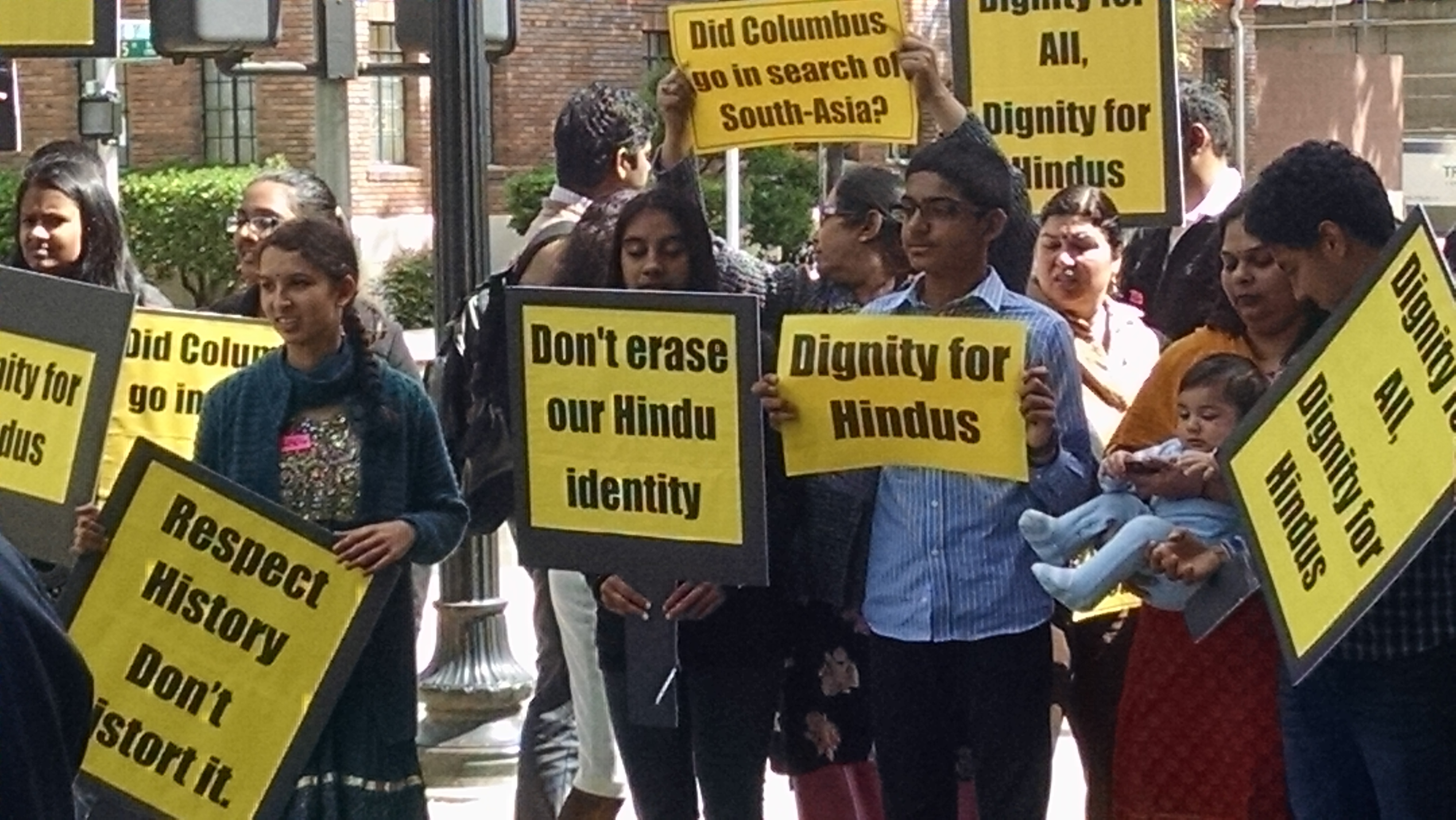 Last month, Hindus in the United Kingdom suffered attacks on their temples, homes, cars, and most of all, their religion. Several video monologues of Islamists were circulated which directly promoted violence against Hindus. As a result, Hindus were physically attacked, one was even bloodied, and  Hindu temples desecrated. When it was time for justice, the truth, as always, was fudged and all the blame squared entirely upon the victims themselves.

Prominent UK media outlets such as the Guardian and even the mayor of Leicester City blamed the violence on Hindus and Hindutva ideology.

Days later in New Jersey, the Teaneck Democratic Municipal Committee (TDMC) passed a resolution, terming US-based Hindu outfits as “domestic branches” of “foreign hate groups” and urged US senators and congressmen to put the Hindu outfits on FBI’s and CIA’s watchlist. This action comes after years-long campaigns of character assassinations, bullying, lying, and gas-lighting of Hindus – by various organizations, as well as politicians – local, city, and regional – in the US. We have seen the resolutions passed by various American city councils against Hindus and India, making us all wonder who conducts foreign policy in the US. One may be led to believe – on the prospects of such drastic action by the TDMC – that Hindus of New Jersey blew up some business tower or ran berserk wielding guns, knives, and with suicide vests strapped on, as some other religionists in the country have done. But that is not the case. On the contrary, there is not one recorded incidence of an American Hindu ever indulging in a violent activity in the name of religion. So, what is going on? Something that others do and yet get to act as champions of human rights all the time. The cause of this action by the TDMC had to do with  Hindus bringing a backhoe (wrongly labeled as a bulldozer) in their parade as a show of their affection for the work done by Uttar Pradesh’s popular Chief Minister Yogi Adityanath.

Actions and reactions to the Hindu community in both the UK and the US run in stark contrast to both the countries’ dealings with other religious groups. This begs a very crucial question – what is causing this discrimination? Is it political? Or is it cultural?

Hindus have been suffering this unjust discrimination for way longer than they acknowledge themselves. Post 1905, America was witnessing growing tension on the matter of immigration. Americans considered themselves the superior race in comparison to the Chinese and Hindus, who were termed “inferior races”. The growth of the eugenics movement further exacerbated the tension with new laws requiring the Congress to do a more rigorous physical examination of the immigrants. Proponents of eugenics believed all mental and physical disadvantages to be the result of the gene pool and race.

The belief that Whites were a superior stock led to the development of racist behavior towards others. The more “inferior” a race according to the Whites, the more racist their behavior turned out to be. America was seen as a frontier of the White men and the new core of White/European/Christian civilization. And the result for  Hindus who had begun recently migrating to the US? Hatred.

The San Francisco Examiner in its February 01, 1910 issue published a column titled “Turn Back the Hindu Invasion”. The editorial was quite reflective of the newspaper’s notions about Hindus which showed pure racial hatred and disgust. “The Hindus are not wanted in California. They are not wanted in any part of the United States,” the editorial said.  Hindus, it added, were “highly undesirable people” and their “introduction is a menace to the American civilization and it must be stopped,” the editorial continued. White men have successfully fought the Chinese and the Japanese invasions, it said, but Hindus were “something worse”. The White men at the San Francisco Examiner were worried about what would become of California if Hindus began moving there. More than a century later when Hindus are the highest executives and managers at California’s most successful companies, what are we to make of the newspaper’s opinions about the same Hindus?

More interesting are the numbers behind this supposed Hindu invasion. As opposed to what the racists wanted to propagate, the total number of Indians immigrating to the United States was only 8,234 between 1899 and 1924.

Yet the Americans were harsher in their approach to Hindus than to any other immigrants. Hindus were regarded by Whites as unsanitary, evil, dirty, and infected. “Half-starved, superstitious and caste-bound Hindus” had little place in the White men’s world. As a result, many Hindus suffered physical attacks and the Hindu community at places in California saw expulsion. While the White men in America made laws to segregate their children away from the children of other Asians in schools,  Hindus were not considered worthy of being accorded even this “privilege”. Hindu children were denied admission in those schools! The Chinese, against whom the Whites created a whole race movement, were dubbed “infinitely more preferable” than  Hindus by the White Americans [1].

Finally, the racist tree of White Americans bore fruit in the form of the Immigration Act of 1917. It brought a new literacy test to limit East and South European immigration. But for Indians, there was no such test. Indians, Hindus in their eyes, were barred from entering the US. And India became part of the “Asiatic Barred Zone”. The other interesting tool used in the Immigration Act to restrict “inferior races” from entering the US was categorizing them as members of foreign revolutionary or anarchist organizations. One cannot help but find eerie parallels to it in the TDMC resolution terming Hindu American organizations as “foreign hate groups”.

Nineteenth-century Britain too harbored more or less the same view of  Hindus, only a slightly more informed one than the Americans. Britain, till the first decade of the nineteenth century, did not consider India to be a  dirty or uncivilized nation. But with the advent of industry and change in English society, their perspectives changed, becoming more supremacist as time went by. Thus, by the 1820s, liberals and utilitarian evangelical groups started talking about the British mission of “saving India” [2].

While the British conservatives respected Hindu culture, even going to the extent of calling Indian civilization the very path of the future, liberals and utilitarians reserved for Hindus a fallen or backward status. They wanted to civilize India through the authoritarian implementation of the principles of Christianity and the European renaissance. Naturally everything in the way of this “civilizing” mission of “saving India” had to be removed. And so started the British era of reform in India which targeted multiple aspects of Hindu life, beliefs, and actions.

One notable example of this British liberal view of Hinduism lies in the early editorials of the Economist magazine. Founded in 1843 by James Wilson to disseminate the doctrines of laissez-faire and liberalism, the Economist considered Hindus to be exemplifying the “native character… half child, half savage, actuated by the sudden and unreasoning impulses”. This tussle of the liberals, utilitarians, and evangelicals with the traditional principles of Hinduism continues till date.

With the turn of time, one would expect some progress in wiping out such ill will against Hindus among Whites. But this has not happened. Since racist hatred against Hindus was largely the characteristic of liberals and utilitarians in England, their “progressivism” rests on continuing their agenda of “saving the heathens”. This export from England led even those who held the topmost positions of power and prestige in the US to harbor an intense hatred of Hindus in particular and Indians in general.

When India was fighting a war to protect innocent Hindus of the then East Pakistan (now Bangladesh) from total massacre and genocide, the US administration was calling Indians “scavenging people”. Then US President Richard Nixon and National Security Adviser Henry Kissinger called their own Ambassador “a bastard” for expressing concerns over the ongoing genocide of Hindus in East Pakistan.

Hindu intellectuals today wonder why US authorities and social groups never acknowledge the Hindu genocide in East Pakistan. We have to wonder whether Whites have changed their attitude towards Hindus at all over the past few decades, despite Hindu and Indian contributions to the US economy, administration, and scientific establishments having been of the highest order.

The fight of the Jews against Nazism and Africans against racism began with an acknowledgment of the history of anti-Semitism and racism. What historical lenses can be used therefore to understand the hatred against Hindus, which is now not just confined to Whites but has spread across racial, ethnic, and religious groups? Surely, race alone cannot account for this jaundiced view of Hindus.