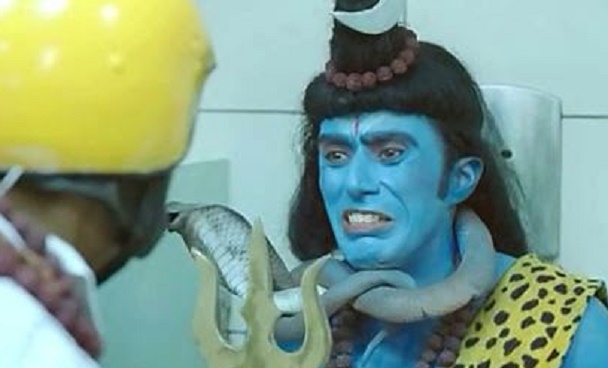 The foremost source of unrelenting and egregious slander against Hindus is India’s film industry, led by Bollywood. Pakistani marauders were halted at the border in 1948 and repudiated every time subsequently, but its surrogates managed to seize control of India’s film industry. The economics of film making, forbidding bona fide investment until recently, allowed the Muslim underworld and its associates to infiltrate the industry by funding it. They were able to dictate the agenda of the film industry, insinuating a thoroughly anti national ideology and institute a standing critique of all things Hindus as well as propagate blatant and slanderous lies. Producers and directors became their playthings and selected artistes found a privileged entry in exchange of reciprocal favours that included every type of venal personal degradation.

Villains of every description, from torturers, rapists, murderers and espousers of every retrograde social custom, somehow sport a tilak and worship some incomprehensibly weird Hindu deity. By contrast, the gentle Muslim neighbour or preacher or Christian priest epitomises generosity and brotherhood. Both unfailingly reach out to look after the confused Hindu facing some personal crisis and resolving some tricky problem engendered by their own absurd religious prejudices. The abandoned Hindu mother, brutally trampled underfoot by her devout Hindu mother-in-law, always finds a teaching job in a Christian school, under the mellow guidance of a mother superior. In Kollywood, Bengali society is often depicted terrorising an educated and independent Hindu girl, in love with a Muslim boy from a humble background, also in keeping with the illusory egalitarian ethos peddled by Bengal’s neutered cultural elite. There are exceptions of course, but they truly underline the contrary rule of demonization.

And ever-present are the caste ridden evil Brahmin, much the way Jews were portrayed by god fearing Christian Europe, before the Nazis resolved the problem in inimitable fashion through mass murder. In addition to the horrors of caste in Indian society, the timeless lament at the Hindu society’s mistreatment of women and a penchant for infanticide, standard fare of colonial conquerors, before they too addressed the problem through genocide and looting. Class oppression has been another favoured theme, tearfully underlined by privileged cine artistes, themselves living in stupendous luxury, the richest among them today worth in excess of US$ 750 million. Yet rarely, if ever, a whisper about the fate of women in India or indeed elsewhere under the medieval jackboot of the Shariah or the truculent determination of the faithful to extract the last pound of flesh, loudspeakers blaring the call to prayer before dawn and major thoroughfares routinely blocked during Friday prayer.

This unforgiving depiction of Hindus, their culture and history has been thoroughly imbibed by the Hindu society itself. The default of the Hindu psyche has been apology for who they are and instinctive defence of their critics as the wronged party in Indian society. The popular ideology of Bollywood has its faithful counterpart in books used in Indian schools and university curricula. They are apparently consciously designed to create self-doubt, if not subliminal self-loathing of their past, their cultural and spiritual identity. Indeed, these pedestrian texts reflexively question the very basis of Indian nationhood. Much of the work of post independent history is studiously silent on critical issues of India’s painful past, actively denunciatory of alternative perspectives and slanderous of their authors, however renowned and scholarly. Their own material is usually slyly dishonest and rarely impartial and all designed to supposedly promote communal harmony by telling blatant untruths. These morally bankrupt historians ignore the bitter travails of the entire millennia of unspeakable horrors, mass murder and slavery and point instead to the alleged evils of conquered Hindu society.

The bedrock of self-hatred, dispensed by India’s secular elites, found a powerful echo abroad that compounded the severity of the impact on Indian society. The Anglo-American and European contempt for India arose from deep-seated historical impulses and India’s reluctance to join the aggressive Western Cold War campaign against communism. The British had also held India’s Hindu elites responsible for the patriotic fervour that eventually led to their ejection from India. Its roots can be traced back to the late nineteenth century and British sponsorship of the Muslim League that culminated in the conspiratorial relationship with Mohammed Ali Jinnah almost fifty years later, to deliver the coup de grace of partition. Virtually all British social science and academic scholarship on India and, as its obverse, Pakistan, was intentionally complicit in the project to demonise India. Its potent influence can be found in their abiding hostility towards India and Hindus to this day, led by British universities, their media and its particular ubiquitous incarnation, spreading half-truths and vicious canards.

India’s refusal to join the US-led Cold War alliance played a crucial role in the West’s hostility towards India, though now waning in dramatic ways, as illustrated vividly in the recent days. In addition, Indians, unlike the Chinese, were viewed as enslaved people and unworthy of assimilation to the status of white or the honorary category accorded to some by South African apartheid. This undoubted racism informed the perceptions of the US policy makers and the British dominance of hostile scholarship on India also became the template that spread across the Atlantic. Virtually no practising Hindu is allowed to hold a major appointment in any US or British university in Hindu studies, with such positions invariably occupied by its most unsparing detractors, whether at Harvard, Chicago, Columbia or Oxbridge or London. The contrast with sympathetic and accommodating attitudes towards scholarship on Islam or China could not be more unambiguous. Thus, the absurdly traitorous Indian Leftist hostility toward their homeland and their own culture found a sympathetic intellectual terrain abroad. Both combined to institute an unholy and improbable alliance of supposed Indian anti-imperialists and its most brutal historic purveyors globally against India.