In defence of ordinance raj 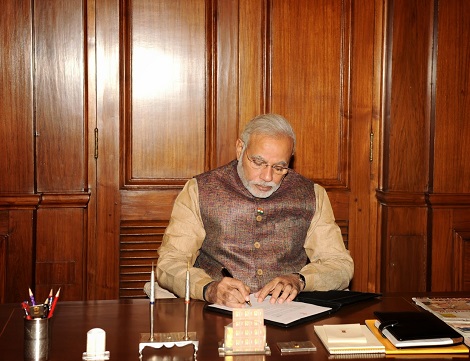 Everybody in the Opposition and many among opinion makers are bemoaning the slew of ordinances that the Narendra Modi government has come up with. The fact that the ordinances are aimed at kick-starting economic reforms has further infuriated both the politically weak Opposition parties and doctrinaire activists, all of whom are looking for an opportunity to jump back into relevance. It is indeed a good sign that the cacophony hasn’t unnerved the government.

Yes, ideally any policy change should be debated and should have legislative approval, but we don’t live in an ideal world, certainly not in a perfect country. Decades of socialist indoctrination have perverted public discourse almost irredeemably; generations of Indians have been tutored into believing that business is bad and any reversal of the socialist policy framework is a vast conspiracy hatched by the World Bank, multinational corporations, and blood-sucking capitalists; and intellectuals—most of them the progeny of Marx, Lenin, and Mao—refuse to accept that the doctrines they imbibed have been thoroughly exposed as false. In such a milieu, expecting meaningful debate, to be followed with rational action, is foolish.

Three points need to be emphasized. First, public discourse in our country lacks objectivity, depth, honesty, and vibrancy. Whether it is the Left or representatives of the Sangh Parivar, the position everybody adopts is doctrinaire rather than rational. Hence the rigidity and the refusal to view the world as it is.

Second, economic reforms in India have almost always carried out either under duress or by stealth. This is because political debate has had little to do with the economic (or, for that matter, any other) realities. So, subsidies get augmented, publicly funded populist schemes get launched, and the public sector enterprises continue (and non-alignment persists even after the end of cold war a quarter of a century ago).

When Prime Minister P.V. Narasimha Rao found that the Nehruvian system could no longer be allowed to ruin the economy, he initiated liberalization in 1991, thus neutralizing the worst features of socialism. The decision, inarguably the best ever taken by an Indian prime minister, was not preceded by any grand, nationwide discussion or demand to effect a paradigm shift in the economic policy; nor was it the consequence of some conspiracy, the theories of lal salaam jerks notwithstanding.

[pullquote]Public discourse in our country lacks objectivity, depth, honesty, and vibrancy. Whether it is the Left or representatives of the Sangh Parivar, the position everybody adopts is doctrinaire rather than rational. Hence the rigidity and the refusal to view the world as it is.[/pullquote]

Third, all those who demand discussion before economic liberalization remain silent when illiberal steps are taken by government, an almost routine occurrence. Most of them ignore statist measures aimed at price control, greater official discretion, etc.

And, finally, we should not forget that all the enemies of liberalization are actually serving their party interests. Consider the case of former rural development minister Jairam Ramesh, the architect of the Land Acquisition Act. He is opposing the pertinent ordinance because his boss, Sonia Gandhi wants the legislation that is universally acknowledged as anti-development.

So, Ramesh said, “By giving up the consent clause, you are opening the doors for forcible acquisition and, in my view, forcible acquisition under any circumstance must be avoided.” His party, the Congress, is responsible for forcibly acquiring thousands of hectares of land from (mostly poor) people over the decades; this resulted in uprooting of millions of people, often without proper compensation. And now he is accusing the government, which is doing a course correction, of unjustly depriving people of their lands. Could political party be more hypocritical?

The Communist Party of India (Marxist) is no less hypocritical. A party statement said, “By taking recourse to ordinance raj, the BJP-led NDA government is undermining the essence of parliamentary democracy and showing authoritarian tendencies.” This from a party which is ideologically committed to dictatorship and which regards parliamentary democracy as a sham!

It is good that the government has ignored these noises. It should continue to do so.