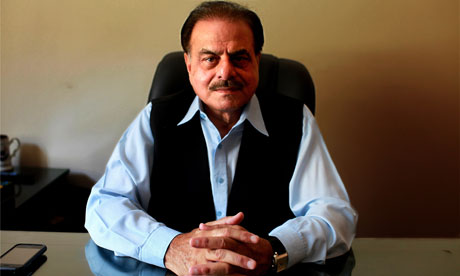 On 28 August, an article provocatively titled “When Hamid Gul offered India peace” (and without a question mark) was published by the Marxist Indian newspaper The Hindu.

Coming soon after the cancellation of the August 23 talks between the National Security Advisers of India and Pakistan, the article was timed to beat up the Modi government for not going ahead with the talks at all costs, as India’s secular-liberal-leftist intellectuals and journalists wanted. The article was written by A. K. Verma, former chief of India’s external intelligence Research & Analysis Wing (RAW) and therefore appears authoritative. Since most of the revelations in Verma’s article, published after Hamid Gul’s death on August 15, are a matter of state secret, they cannot be refuted or substantiated formally.

Verma’s key assertion in the article was that Gul offered India peace, presumably permanent peace. It came as a bombshell since Gul was known for seeding bloodshed against India over years. So, a fuller understanding of who Gul was is needed.

Hamid Gul was a senior Pakistani intelligence officer who steered Pakistan’s jihad, financed with CIA money, during the 1980s in Afghanistan. He served as the chief of Pakistani military’s Inter-Services Intelligence (ISI) from 29 March 1987 to 4 October 1989. By 1988, the Soviet troops stood defeated in Afghanistan and withdrew by the next year. Gul had emerged as the hero of Afghan jihad.

In his position as the ISI chief, Gul had coordinated the entire gamut of the Afghan jihad–having created, financed and nurtured jihadist organisations. Having emerged as the hero, Gul and his ISI thought they could achieve the same feat in Kashmir. Around this time, Pakistan-sponsored jihadi terrorism began in Kashmir for the first time.

In 1988, A. K. Verma was the chief of RAW. Around this time, the ISI under Gul had seeded the jihadist terrorism in Jammu and Kashmir and the pro-Khalistan terrorism in Punjab. But in 1987 when Pakistan got worried that India could launch a military attack to defuse the situation, Pakistan’s military dictator General Zia-ul-Haq came rushing to Delhi to meet Prime Minister Rajiv Gandhi, on the pretext that Zia wanted to watch a cricket match.

Verma’s article gives the impression that Gul’s team had agreed and later exchanged valuable information with India. But Major Amir writes: “I cannot tell you further details about this [meet between Gul and Verma], but let me say this that in this meeting it was clear from the RAW chief’s tone that he was under the awe of ISI. He was ready for the exchange of lots of information with us but we were not willing for it.”

Amir, the former ISI officer, further writes: “We had told him [RAW chief Verma] that this [exchange of information] is against the ethics of intelligence.”

To be fair to Verma, it is possible that the ISI indeed exchanged some information with the RAW team, but Pakistan, right from the beginning has been known to have adopted a policy of duality: it undermines and supports Americans in its relations; it supports the U.S-led war on terrorism and simultaneously aids the Taliban to kill U.S. troops in Afghanistan.

One does not know whether or not to believe Verma’s version, or that of Amir’s own version of the events. In his article, Major Amir reveals a troubling point that the RAW chief offered Gul to hand over the details of RAW assets in Pakistan. The former ISI officer writes: “[Verma] said that you give us information regarding your one network in India. In exchange for it, we will give you the information regarding the entire [RAW] network in Pakistan.”

Like Verma, Amir also reveals that the Geneva meeting was a result of an understanding between Rajiv Gandhi and Zia-ul-Haq, the goal being to lessen the tension between the two countries. “Keeping aside what was agreed, I would like to say, Praise be to Allah, that Pakistan’s head stood high in this meeting… I wish I could tell you how we fought back against India’s goondagardi [gangsterism].”

Sometimes it’s useful to understand the enemy’s mind instead of going by apparent overtures. As per the archival reports released by the Washington-based Middle East Media Research Institute (MEMRI), Gul gave numerous interviews that reveal his thought process.

For example, Gul stated the following over the course of years: “As Muslims, we are militant by nature”; “Jihad is our right”; “I am an ideologue of jihad”; “As far as Al-Qaeda is concerned, I simply say: come up with the evidence for 9/11”; “The Americans are more and more inclined – because the U.S. military cannot sustain its casualties – to employ mercenaries”;  “The Taliban are Afghanistan’s future, and the Americans its past”; “I had a detailed meeting with [Afghan Taliban commander Jalaluddin Haqqani]. I said that the Shariah system would be implemented in Afghanistan.”

Hamid Gul also stated: “The [Pakistani] nation needs to be determined. If necessary, India’s dams will be blown up”; “I said from day one that it is a Crusade war. Americans are fighting it as a religious war”; “Americans have become fanatic against Islam and are not ready to tolerate even our Koran, Kaaba, and Medina”; “China will be the biggest beneficiary when U.S. troops leave the region. On the other hand, Islamic forces are also moving to confront India”; “Two states came into existence in 1947 and 1948: one, Pakistan; two, Israel… Ultimately, only one of them will survive”; “American actor, Mel Gibson, said that the Jews caused all the wars… The Jews have always caused the wars”; “Our basic war is against… the so-called state of Israel.”

Hamid Gul was one spy chief who often thought a hundred years ahead, while Indians think a thousand years behind. It is also understood that after his retirement, Gul continued to serve the ISI in informal capacity. The sea-borne and airborne attacks on 9/11, 26/11 and in September 2014 by Al-Qaeda in the Indian Subcontinent (AQIS) could have originated from a single person.

One cannot discount the fact that Al-Qaeda was established in 1988 in Peshawar when Hamid Gul was in total command of the jihad. Before 9/11, attacks were launched on New York’s World Trade Center as well as the CIA headquarters in Langley, Virginia. Gul was aggrieved that it were Americans who had prevented his rise to the post of Pakistan Army chief.

Often, India fails at the intellectual level. The fact that India failed to strike at the Pakistani nuclear programme in 1987 is a testimony to this failure. If Gul did offer India permanent peace, the first instinct should have been to not trust him, especially since this “offer” came from the chief of ISI, a global jihadist organisation whose role was seen even in the 7/7 attacks in London.

Dualism is an essential framework of Pakistani foreign policy: hold talks, support terrorists; host the Americans, host the Haqqanis; send terrorists into Kashmir, hold talks with Indians; create think tanks to support the so-called Track II diplomacy, undermine the enemy. The ISI thinks long term. It sends former government officials, posing as journalists, to New Delhi. They write a short book “Delhi by Heart” in 2013 on Sufism in order to gain legitimacy in the Indian press and Track II diplomacy, but the goal is to move the author to Washington DC as a replacement for Ghulam Nabi Fai, a Kashmiri indicted in 2011 for working for the ISI.

In his article in Roznama Ummat, a newspaper close to the ISI, Major Amir narrates an incident. When Benazir Bhutto became the prime minister for the first time, she held a meeting with Gul’s team.

“Madam, this ISI is a dangerous weapon in the hand of Pakistan,” Gul told her and added: “Keep this weapon safe for the sake of Pakistan, whether or not I live. You have the right; you can remove whoever you want from the ISI by telling the army chief but save the ISI…”

In the article, Amir warns Ajit Doval, the National Security Adviser of India: “Ajit Doval says we will reply the Mumbai [26/11 terror attacks] by Balochistan [creating insurgency there]… I say with complete faith that the ISI of today can create not one but twelve Balochistans in India.”

Amir asserts in his article that he was responsible for foiling a joint Indian-Israeli plan in 1987 to destroy Pakistani nuclear installations. It will be interesting to learn how the ISI foiled this plan.

In his article, A K Verma has written that the Hamid Gul “peace process” failed because Gul was removed from the ISI and General Zia-ul-Haq died in a plane explosion. It will be necessary for India’s security analysts not to take a charitable view of ISI officers.

Verma writes: “When the Indian authorities made efforts to pick up the threads of the covert operation, they were told that no such operation was ever carried out and there was not a single paper in the Pakistani records which would testify to its existence.” He also notes: “Two generals like Gen. Zia and Gen. Hamid Gul, who believe[d] in taking unorthodox steps to solve disputes with India, are unlikely to emerge in Pakistan easily.”

This writer is not in a position to either confirm or deny the assertions made in Verma’s article, but one thing is certain: of Pakistan’s leaders, General Zia and Gul were the last ones to think of peace with India. To reorder Verma’s sentences from a single paragraph: “Pakistani generals will go any extent to prevent a new page opening up in Indo-Pakistan relations.”