Does the Left feel overwhelmed by ‘Buddha in a Traffic Jam’? 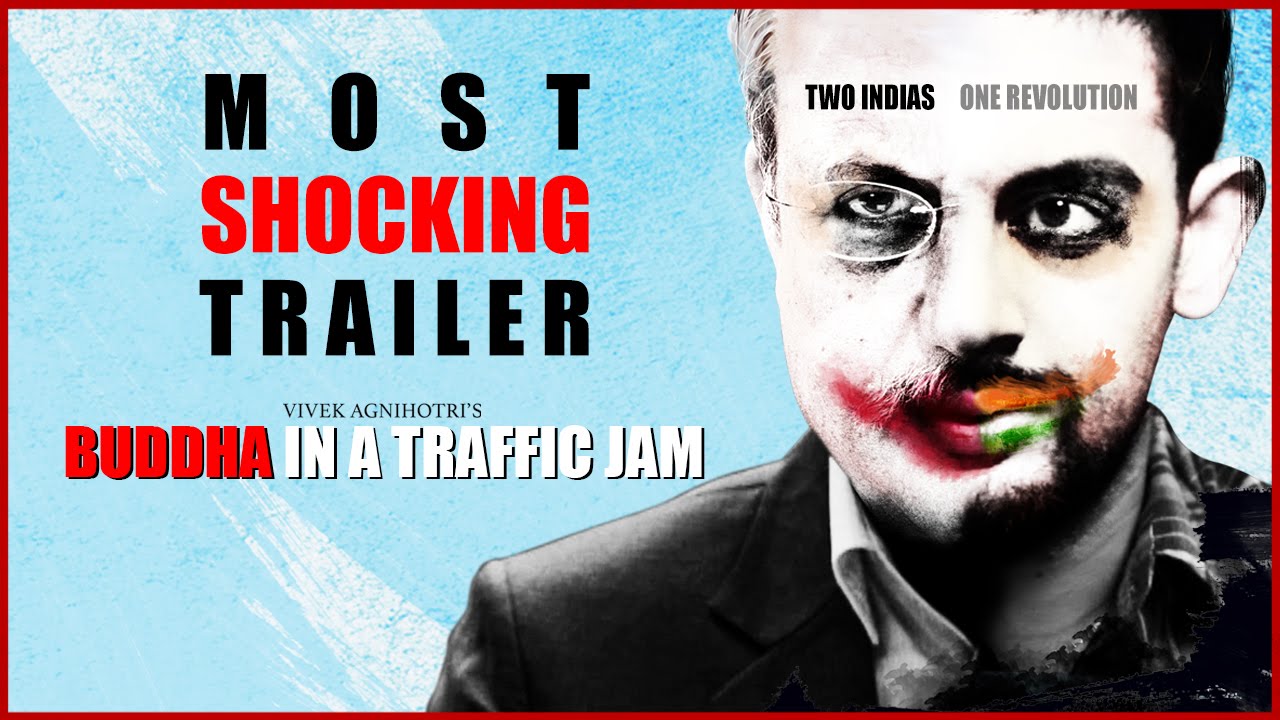 In a performance that won him a posthumous Oscar, Peter Finch’s television anchor, Howard Beale, exhorts people to open their windows, lean outside, and scream loudly “I am as mad as hell, and I am not going to take it anymore” ( Network-1976). When I read about the appalling behaviour of left leaning students/activists at the Jadavpur University protesting filmmaker Vivek Agnihotri’s ‘Buddha in a Traffic Jam’ movie, I could not help but wonder what Howard Beale would have made of this outrage on liberties. He would have perhaps realised, now that free speech is being attacked by common people, it was a lost cause.

Readers are cautioned that the writer has seen ‘Buddha—‘ at a private screening held by the filmmaker in Bangalore last month and in the course of this article you may have some spoilers.

To truly appreciate the scale of the attack on Freedom of Expression (FoE) that the Jadavpur incident represents, you have to see ‘Buddha in a Traffic Jam’. I think most of the social media discourse about the movie is misleading as it refers the movie as anti-naxal or anti-left, and hence the battle for its screening as a battle between red and saffron in a manner of speaking. Actually the movie is neither of these. It is a microscopic, almost anthropological, look at how the poorest people of India are hard done to by evil corporates on one side and the militants on the other. Vivek turns his creative eye on the right wing hooliganism like the Mangalore pub incident, where women were attacked for wearing skimpy clothes. He is also critical of the counter insurgency movements like Salwa Judum, showing how often the ground levels of both Naxal and Salwa Judum are in cahoots to target the poor people. That intellectuals supporting terrorism and NGO activists are in bed with the militants is no secret either. As the movie cuts back and forth between the metro where college professors talk revolution, and the harsh, arid landscapes of rural India, we realise there are no heroes, only victims. That, argues Vivek, is the true tragedy of this conflict.

What the movie refuses to do, is to portray the cold blooded Naxallites as messiahs of the poor, like in the 2012 film ‘chakravyuh’ where Om Puri’s Naxal leader is seen telling to Abhay Deol to distribute money earmarked for buying guns to the poor. That does not happen in real life. You cannot call a movie right leaning or anti left just because it refuses to fabricate lies. Vivek’s own credentials as a right winger (Or Sanghi if you will) are iffy at best. After all, less than 18 months ago, his wife and eminent actress, Pallavi Joshi, resigned from the FTII in protest. One of the reasons for the protest, as we all know, was NDA government appointing Gajendra Chouhan as the Chairman.

So here is a movie that reflects the counter insurgency movement and the right wing extremists in an extremely unflattering light, made by a moviemaker with no particular political leanings, and yet the activists at Jadavpur nearly killed the filmmaker when he landed in their den to screen his movie. When you reflect on this, the true extent of left fascism and intolerance will dawn upon you.

The first strike against Vivek is, of course, his refusal to drink the leftist concoction of ‘intolerance’ and ‘award wapsi’. He was vocal about it about a year back, and his views found a lot of grassroot support. In the leftie rule books, this break from the ranks is inexcusable. Vivek was always going to be a target after that. I get the feeling that he could have made a sequel to Goal, and still the left would have found a way to block it. That is just the nature of left’s intolerance. If you do not agree with their political views, they will not come after your views, they will come after your livelihood. Left has very poor regard for the democratic process of debates and arguments. For them, an opponent bullied into silence, is an opponent won over. Recently, ESPN anchor Curt Schilling expressed his opinion about the Transgender Restroom rights, and lost his job because of it. I am not arguing about the validity of Curt’s arguments here, merely pointing out the lunacy of deeming a three time World Series Winner unfit as a commentator, because he thinks biological men should not use women’s restrooms.

While we are on this topic, let us also dispel the leftist notion, that this so called Red versus Saffron is a battle between the oppressed (Red) versus the Big Bully (Saffron). Buddha shows the poor people in nothing but sympathetic light, it is the gun toting maniacs that Vivek has problems with. Jadavpur gang does not care for the poor people, or they would have allowed a movie proposing a solution for the poor to be screened. In this dispute, the Jadavpur gang is acting as bouncers of the armed militants. They are the bullies, trying to crush Vivek’s voice so that the armed militants can continue exploiting some of the poorest people on the earth.

The second strike is his balanced portrayal of the problem at the root of the Naxal terrorism, and his temerity to suggest that technology and trade may be the answer to the problem. For people who are used to terming modern business and modern technology as the villains of the episode, Vivek’s solution is damn nearly blasphemous. We all remember the anecdote about a young lawyer going to his lawyer father, and proudly telling him that he got a result for a client in a case the father fought for over thirty years. The father scolds the young fool “you idiot, that client put you through your entire student life, how will my grandson now become a lawyer?”

There is of course a larger issue behind these violent protests, and that is one of the reasons I am really not stressing the FoE issue too much. You don’t need to read this article to understand that it is hypocrisy of the highest order for students to support the right of saying ‘Bharat tere tukde honge’ on the one hand and then getting violent when a movie with opposing viewpoint is played in their campus. There is, however, the possibility, that you may miss out the current of unease running through this episode.

There is no doubt that the so called left movement is losing support worldwide. The regressive left that puts political correctness above free speech is finding opponents from its own ranks (American talk show host Bill Maher is a good example of this). People, the world over, are overwhelmingly voting out the left leaning parties and bringing back more balanced right leaning or centre of right governments. The left think tank knows this as well as we do. Since, the left is largely an institutionally thinking movement, it has started responding by identifying the root causes of their losses the world over.

Not surprisingly, the left sees free speech as its biggest enemy. They have consistently sought to undermine free speech by painting it as bullying or hate speech, conveniently ignoring the fact that perhaps the biggest hate speeches or bullying has come from within their own ranks. In the age of social media, the left thinkers have given birth to the term ‘troll’, which today is defined as anyone who does not agree with their worldview and is vocal about his/her opposition. Martyrs are being created out of bullying, abusive, and over entitled journalists. Each time one of them gets paid in his own coin, the entire left uses it as an opportunity to bully social media companies like twitter into clamping down free speech. And therein, lies the left’s biggest problem with Vivek.

He is no troll, you cannot dismiss him as an abusive, unemployed moron who is venting his frustrations, 140 characters at a time. He is a successful filmmaker with an excellent resume in both ad and motion picture industry. Him coming out against the world view the left holds as sacrosanct punctures holes in their own theory that the right wing is substantially a lobby of paid thugs out to destroy the intellectual and secular fabric of our country. Vivek represents the inevitable mainstreaming of a generation that is rejecting the century old left philosophy that has failed spectacularly the world over. If this becomes the rule rather than the exception, then it can overrun the last bastion held by the left. Universities like Jadavpur are the last places on earth where Karl Marx is still revered, and blowing the brains of CRPF constables with machine guns is seen as a viable solution to the problem of poverty. The intellectuals hold very poor opinion of disciplines like engineering (read their demands of de-subsidizing IITs to understand my point). The possibility that new age technology can indeed solve the century old problem of poverty, must be frightening for them.

In the days to follow, the left’s formidable machinery of misinformation and propaganda will be in full swing against Vivek and his team. Already, charges of molestation against ABVP (a classic crybully move) are made, and the filmmaker is accused of exaggeration. Vivek is accused of creating hype for his movie and suddenly people are branding him a failed filmmaker, as if that in itself is enough of a cause to attack him. It is very important for us not to lose sight of some basic facts, viz 1) Expressing his opinion about a problem and a solution to it is Vivek’s constitutional right of FoE. 2) Universities that stretch their definition of FoE to sedition have no moral standing in denying screening to him. 3) Violence and bullying are the left’s tricks of trade, as are fake and exaggerated claims of oppression. What happened in Jadavpur is not an aberration, it is a sign of a cancer that if allowed to spread will push the whole country into anarchy and chaos.

American talk show host Bill Maher once said Free Speech works only if nobody gets a waiver. While discussing this issue, it may help us keep our perspective if we remember that in essence, this issue is about an independent filmmaker exercising his constitutional right of free speech, and a bunch of thugs demanding waiver.