The Economist needs to be renamed “The Racist” 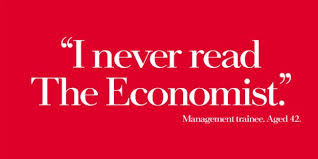 On 29 September, the famed The Economist published a piece, which established what millions of Indians constantly suspected: it was racist.

During the 2014 Lok Sabha poll campaign, the Economist had taken the privilege to sit in the judge’s chair mouthing all sorts of decrees about who India should elect and so on. The present piece carries on that same failed attempt with new heartiness.Indeed, one can hardly ignore the anti-India slant of the author of the piece in:

In the India of the past six decades, events like this were a reliable shambles of short-circuiting loudspeakers, security guards with lathi sticks and feudal leaders with appalling punctuality.

Note that the author does not provide any shred of evidence to back his claim that Indian leaders were/are feudal.  Not content, the author then descends to downright crudeness by likening the Indian Prime Minister Narendra Modi to a pain-in-the-ass. At which point we need to applaud the mighty Economist for finally getting high on publishing dreadful grime as editorials. Indeed, the piece is a clear expression of the author’s intuitive abhorrence for India, Modi, and NRIs.

As usual, with most raucous Modi haters, the author ignores the fact that Narendra Modi has been exonerated by the Apex court of India. Modi himself has articulated his stand on numerous occasions and has given details of the prompt action he took to stop the communal clashes in Gujarat to the SIT which has been well-documented. The SIT report is available in the public domain. The Economist as usual, does not even make an attempt to tell its readers that such a thing as the SIT report exists. Then again, facts shouldn’t come in the way of producing racist debris.

Next, the author goes on to upset millions of Indians, when he terms the Ganges as ‘toxic.’ I wonder, was the Economist aiming to start a trolling trend with the piece or was it just an expression of its aggravation that a democratically elected leader who was pointlessly harassed by the almighty American establishment, is now their guest of honor? And this, after this great doyen of print media tried to influence India not to elect this mass-murderer (their words).

The NRIs also come under attack in this vicious piece as the author cannot tolerate the fact the immigrants of a third world nation are cheering for a man whom aims to bring their homeland from third to first.  It seems the Economist is still to get over its colonial hangover. Or perhaps this is its fond longing for the long-lost days of the Raj where they could whip the bloody natives with impunity because the jolly old lads wanted to have some fun.

The sun has long set on the dictatorial Raj, but going by this dreadful piece, the Economist seems to be stuck in a time warp thinking this useless gibe will be taken seriously. For the moment, the Economist can go back giving economic advice which can usher in another financial meltdown.