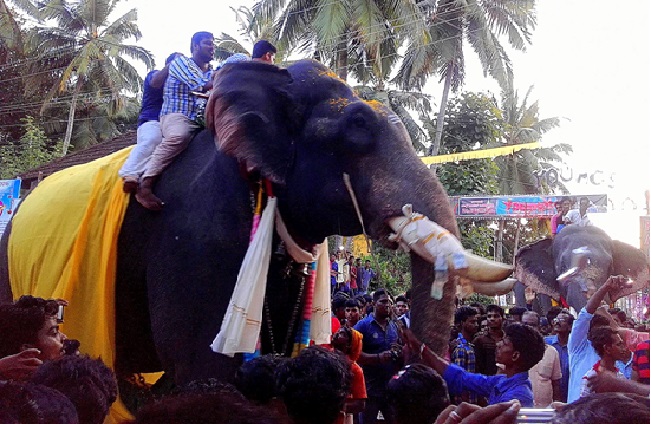 Murder attempt on blind tusker: Killing opponent’s elephant for revenge is not new to Kerala

At times, it all sounds like a fairy tale; sometimes like a psychological thriller—the Hitchcock kind. Drama and suspense unfolds every day as elephants are paraded on streets and in religious institutions, thanks to their stardom and fanfare. With stardom comes ego clashes, petty fights and controversies, they say. The lives of these gentle giants in captivity, which started as draught animals, then as war machines and later as royal adornments, have changed manifold in the last decade and half. From the days of reverence and admiration for elephants, which arose from close associations with them, personification of these beings have gone to a totally different level today as exemplified by the aforementioned news headlines.

Elephants are the golden geese today. With growing ‘devotion’ and competition, numbers of elephants in pageantries have increased several times; and the number of such lineups too. Although activists and media call them ‘temple elephants’, it is time one ruled out the terminology; they are now part of processions across religious institutions. With rising competitions and increase in money involved, there’s burgeoning politics and in the cost-benefit analyses of these episodes, the pachyderms bear the cost.

In January 2013, Ramachandran, the tusker mentioned in the headlines above, ran amok in a temple near Cochin, and killed three innocent women bystanders. The half blind animal, tallest tusker in captivity, perhaps, is one who has borne the brunt of fanfare and stardom as is evident from his life history. Perhaps owing to stress and trauma during early part of his life, he has a bad temperament, which cost him an eye, and also the lives of two other tuskers and eight humans. This is not just the case with Ramachandran, but several others who with their padded worn out soles still march the festival grounds of Kerala. Increasing stress could sometimes lead to redirected aggression, which can cost a life or two or sometimes more, of humans and even elephants. Social media radars have been quite active this festive season (which started in September 2015) and updates on networks show that till date there have been fifty odd incidents of elephants running amok across the state.

Since December 2015, the number’s been over thirty, and the human death toll being four (three mahouts and a bystander), including the last one at the renowned Sabarimala temple. In three of those four cases, the individual elephants have had previous case histories, of killing or injuring people and then the pertinent question remains why such individuals are paraded. The answer is fairly simple; rising demand for elephants at pageantries due to their increasing use in processions—religious and non-religious—has led to the use of musth elephants (by suppressing musth using antiandrogens and antipsychotics), ones that were kept away from processions due to their case histories and temperament, and also injured or diseased individuals.

The Kerala Captive Elephant (Management and Maintenance) Rules 2003 (amendment 2012) is a fairly comprehensive legal document that prescribes norms for using these animals categorised under Schedule I of the Wildlife Protection Act (1972). What is unfortunate is that in most cases, none of these norms, regulations or recommendations is followed. In a recent incident, a tusker ran amok and attacked another, after which he was brought under control. Identifying signs of musth, the tusker two days later was taken for timber hauling (Rule 7(7) of the aforesaid document states that an elephant in musth shall not be put to any work) which led to the animal running amok and killing its assistant mahout or cavady. As in this case, most such incidents are avoidable and are results of direct violations of the norms.

Five or six people (sometimes up to ten) ride an elephant as part of these ‘cultural’ processions, amidst jeering of the crowd, loud crackers and drums; some even bursting confetti party popper atop elephants! For any parade or work, an elephant is supposed to be certified fit by an authorised veterinary doctor and the fitness certificate is yet another document that is often either falsified, or issued by vets who sometimes don’t see the elephants, or even used for multiple parades and transportation (rule 4(18) states fitness certificate to be issued prior to every transportation). Recently an elephant that was used (and is being used) for festivals had deep, open wounds on his hind leg, resulting from torture from mahouts as part of the routine breaking process. Interestingly, despite that, the elephant did have a fitness certificate issued by a renowned vet in the state, which even stated that the animal is free of injuries, diseases or illnesses and is fit for work.

When the rules were framed in 2003, with welfare of elephants in mind, the committee proposed trucks for easy transportation of elephants. But contrary to expectation, the vehicles only added to their stress by shuttling them between faraway places faster. Our initial analyses show that many elephants travel anywhere between 3000-3500 km during a festival season between September and May covering an average of 140-150 festivals.

Being highly mobile species in the wild, lack of exercise, and constant movement in trucks seem to add to their ailments, particularly related to their feet. Their apprehension and fear of unstable surfaces also adds to the stress and trauma they undergo as is evident from the behavioural traits exhibited by most elephants during these truck journeys.

Things have gone from bad to worse after rampant leasing out of elephants began since early 2000s. Recently an owner (who didn’t want to be named due to political reasons) stated that in the district of Palakkad alone, there are 75-80 agents or brokers, who are middlemen between elephant owners and festival committees, and mint money. Despite legal provisions being in place, these rampant monetary transactions on a Schedule I animal are ongoing. An auditor (who again didn’t want to be named) in central Kerala pointed out that the captive elephant sector in the state is ground for monetary transactions coming up to millions of rupees annually.

As these elephants are rented out by most owners or agents without an invoice, bill or receipts (except for certain temples, who do issue receipts for payments made) most of these transactions are not taxable, he adds. The average rent of an elephant has gone from four digit numbers to five and six digits today, and given that, one can imagine the business interests of this sector.

The way social media is used for these is also getting worse with more and more FB pages being created for these celebrity elephants, and online debates, arguments and fights happening every minute. The pressure from fans and followers prompt most mahouts to compete with other mahouts and elephants in what is popularly called ‘head-lifting’ competition (where an elephant has to raise his head higher than others and stand for minutes to hours motionless, even without flapping ears!), something that the owners’ association vouched that they will abstain from, but continues to happen even till date.

Video evidences of elephants being poked and beaten for lifting their heads have gone viral on social media, with activists and concerned people raising their voice and despite all that concerned authorities have failed to respond. Such fights among fan groups also trigger rivalry among mahouts who want to compete more at the cost of anything, taking us back to the headlines mentioned in the first part of this piece.

What everyone seems to ignore or overlook is the fact that this indeed is a sinking ark, from where elephants are disappearing gradually, succumbing to stress related disorders, colon impaction and so on. Till recent days, there was some hope that the forthcoming days would witness positive changes in the sector, but the antithesis is slowly happening; thanks to everyone involved.

Hindsight — The irony: The same public who raise outcries and protests against wild elephants coming to croplands and occasionally damaging crops or costing a life or two accidentally, seem to accept numerous such deaths caused by these so-called living gods in chains. While these captive ones get away with their cases, their wild counterparts are paying huge toll in the form of retaliation by humans. Heights of irony indeed!