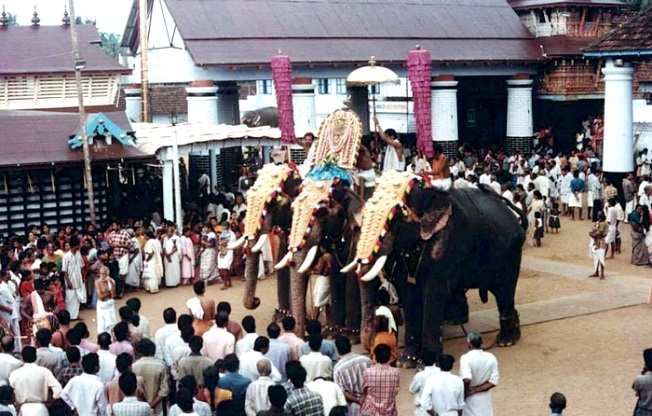 In a letter dated 14 October 2015, the Minister of State (Environment, Forests and Climate Change; henceforth MoEF & CC in the series), Shri Prakash Javadekar wrote to the Minister of Women and Child Development, Smt. Maneka Gandhi—in response to an earlier email she had sent—announcing the Bihar State Board of Wildlife’s decision regarding banning transport of captive elephants from Bihar to other states and vice versa, and also banning their sale, purchase and transfer across the country.

This received considerable attention in several regional and national dailies, and in several forums on social media. To many people, the larger context (or relevance) of the order was (is) not very clear.

The objective of this article, and the forthcoming ones in this series is to deal with various issues and shortcomings in the captive elephant management sector in the country, with emphasis on the southern Indian state of Kerala, which boasts of its centuries’ old association with the largest land mammal in captivity.

Elephants are perhaps the only other wild animals, apart from primates that have had such close associations with humans since time immemorial. Their associations range from battlefields to backyards, where they stood as living symbols of royalty, pride and pomp and also as an icon of intelligence, emotions and personhood.

Personification of elephants can be attributed to the worship of the elephant-headed god Ganesha, who according to Hindu puranas is the remover of obstacles. This reverence to a greater extent has helped in well-being and conservation of the animals during the earlier days. However commercialisation of elephants has taken a toll on their lives since the recent past, and today, the growth of this sector as a multimillion dollar industry has worsened to deplorable levels.

Evidences for commodification of elephants can be found in the magnum opus Arthashastra, where the author Kautilya emphasizes on the creation of Gajavana or elephant forests for the protection of elephants, for their later use in wars.

Despite mention about their commodification, Kautilya indeed lays emphasis on ensuring the welfare of these elephants in these protected reserves. Their commercialisation in the contemporary context, on the contrary, however, has led to the exploitation of these animals for blind profit, while the welfare of the animal has taken the back seat.

From symbols of pride and pomp in the royal courtyards of Kerala, large scale monetary transactions of elephants began with their influx from the Sonepur mela in Bihar. The first set of elephants from Sonepur arrived Kerala in the late 1970s not long after the government officially banned the capture of wild elephants, and that was when the floodgates opened.

Since then, hundreds of elephants have crossed several interstate boundaries and reached Kerala from various parts of India such as Arunachal Pradesh, Assam, Bihar, Chhattisgarh, Rajasthan, Karnataka and Tamil Nadu. Elephants were available in hundreds in the annual Sonepur cattle fair at very low prices, and hundreds of people thronged the banks of the Ganges to buy elephants in large numbers and later sell them in the south Indian markets.

The demand kept increasing year after year, leading to more supply by capturing them from the wild stocks illegally. The numbers of elephants in the state of Kerala since then have shot up extensively, reaching a situation where today, about ~80 per cent of tuskers in the state are from the North and North-eastern states of the country.

With an increase in the number of elephants and opportunities for monetary gain, captures and merchandises of elephants became rampant, making them a commodity rather than an intelligent companion and the apotheosised beings started undergoing apocalyptic transformations.

With 36 in 2013 and 24 in 2014, the state is losing elephants every year in a way that the system has never witnessed before. Bulls of 30s and 40s—in their prime—are losing their lives to colon impaction and foot rot and other fatal diseases, which to a greater extent can be attributed to the workload, stress and mismanagement.

The elephant in the room, what we’re not talking about, is this mismanagement of elephants in captivity, and how one should go about with the current system, which seems to threaten the very existence of these animals. Elephant welfare debates and arguments and outcries have always happened at the occurrence of a mishap but the lack of a set of reforms (for the lack of a better word) to mitigate the distress of these gentle giants is the need of the hour. And that is what this series is aimed at beginning a discussion on that.

i. Reports by the Thrissur based Heritage Animal Task Force