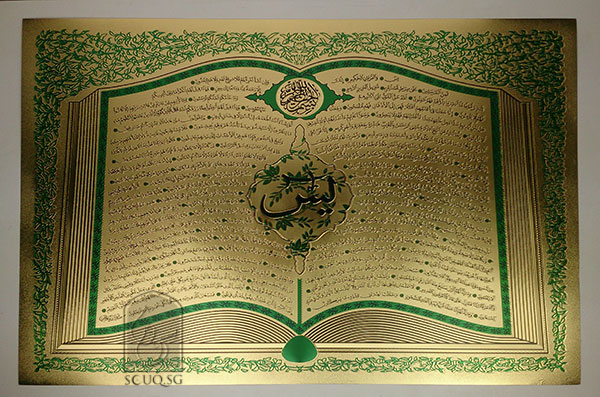 This is the second part of the IndiaFacts series analysing the Quran through a Dharmic perspective.

Continuing from the introductory essay in this series, we can now begin to examine the key verses of the Quran.

(Surah I al-Fatiha, The Quran)

Commentary: According to the Quran, Allah is the Creator of everything—there’s no belief in reincarnation. Creation, according to Islam, is not governed by the Natural Law as told in Hindu scriptures. Among human beings, one can observe the rich, the poor, the happy, the sad, the kings, the beggars, the handicapped, the lame, the wretched, and the extremely prosperous. According to Hindu scriptures, the creature has bliss or pain as a consequence of his/her own action—good or bad—in this birth or in some past birth. However the Quran negates this and states categorically that Allah causes this inequality. Allah who causes such inequality, cannot thus be called compassionate by any reasoning. On the contrary, he is whimsical and partial as we shall see.

Commentary:  Allah has been described as the Master of Judgment. Some good acts are done by even the gravest sinners, and some vices remain in the actions of the most virtuous. If Allah sends somebody to Hell for eternity without conferring upon him the award for virtues he acquired by means of good actions, then that person would be denied of justice by Allah. Similarly, if Allah sends somebody to Heaven for eternity without caring about the sins of that person, then that person would not receive the punishment for the sins committed. This is not justice either. Is there any substance in the praise, on which the prayer is built?

vi-vii. “Show us the straight path, the path of those whom Thou hast favoured; Not the (path) of those who earn Thine anger nor of those who go astray.”

Commentary: In Astrology, we can see that the planets have their favour and anger over people. Here in the Quran, we can find that Allah has His favours and disfavours— is Allah some kind of Saturn-like planet? Favour and disfavour without any rationale and reason is not the characteristic of Ishvara (Pervasive God). We know that, “Ishvara is perceived as subtle, without any gross or subtle form, sublime, unblemished, without a shred of sin, full of knowledge, Omniscient, Great, self-revealing and Omnipresent (Isha Upanishad, verse 8; Original: sa paryagācchū kramakāyamavraṇa masnāviram śuddhamapāpaviddham). Anger is a characteristic of the asuric nature. “Anger and ruthlessness are traits of asuric nature. They originate from ignorance” (The Gita, chapter 16, verse 4; Original: krodhaḥ pārusyameva ca; ajñānaṃ cābhijātasya pārtha saṃpadamāsurīm). To enhance tejas (spirited opposition towards the asura) and divinity, Hindus perform puja (worship) of the deities. But, anger should never be desirable by anybody. These words of praises to Allah are rather insulting for any God-like entity.

“Who believe in the Unseen, and establish worship, and spend of that We have bestowed upon them; And who believe in that which is revealed unto thee (Muhammad) and that which was revealed before thee, and are certain of the Hereafter. These depend on guidance from their Lord. These are the successful. As for the Disbelievers, Whether thou warn them or thou warn them not it is all one for them; they believe not. Allah hath sealed their hearing and their hearts, and on their eyes there is a covering. Theirs will be an awful doom.”

Commentary:  What is the meaning of “certain of the Hereafter”? Does it mean that whatever heinous atrocities one perpetrates, if he believes in the Judgment Day and the Quran, then he would commit no sin? In the countries where there is no other religion but Islam, is there not any penal code for the criminals? If there is, then is not it an intrusion into the rights of Allah? We can say that there is no characteristic of Ishvara in Quran-ism; moreover, no truly educated person can believe in its philosophy. The Quran threatens the kaffirs [infidels as referred in the Quran] to inflict fear on them. Those who have gone through the Vedas and the Vedanta, will find fear from Allah a ridiculous concept; rationalists can prove the impossibility of such a Creator and logical fallacies in these statements. To children, some talk about unknown fears; but when these children grow up, they find the hollowness of these fears. “Allah has sealed the kaffirs’ heart and hearing”—who would believe these words abandoning the Vedas and the Vedanta? If Allah could have sealed the mouth of the infidels, then He would have shown greater intelligence, as the infidels would have become mum and Allah would have faced no argument.

3. And give glad tidings (O Muhammad) unto those who believe and do good works; that theirs are Gardens underneath which rivers flow; as often as they are regaled with food of the fruit thereof, they say: this is what was given us aforetime; and it is given to them in resemblance. There for them are pure companions [beautiful women having no menses, stools, urine, etc.]; there for ever they abide.

Commentary: No doubt that in the land of Arabia, rivers and fruits are precious. But, in our land, there is no dearth of such heaven. Up to 50,000 years, these women who are eager to please the man, would live without any man—this is not indeed pleasurable for these women. Therefore, the Islamic Heaven is a prison for 50,000 years for these women. Furthermore, men would find women in the heaven; but if their wives find their men with those beautiful women there, then those poor wives would certainly be jealous. Again, if it is said that these wives will find young men too, even then, that would not resolve the issue. If a man finds his women neck deep in pleasure with other men, he would not be able to tolerate that either. On a side note, if boys and girls who die in a very young age, resurrect to become men and women in their prime age in Heaven, then that would cause grief for both young boys and girls of this world as well as their promised companions of the Heaven. There are more reasons for grief than happiness in the Heaven. Indeed, the idea of this Heaven is condemnable. Are the deeds that are censured in this world, considered ideal in the Heaven? If you retort that everybody would attain prime youth in the Heaven, then it is not a nice thing to engage the little boys and girls in sex by making them grow up into youth bypassing precious childhood.

4. Thus Allah bringeth the dead to life and showeth you His Signs: Perchance ye may understand.

Commentary:  After being 50,000 years in the grave, a human being would again be made alive. And then, they would understand that the Quran, Allah, all these things to be true. To create faith in the Quran, there are other strange words in the Islamic scriptures. “The Quran would be given in the right hand and in the left hand on Judgment Day. You will be asked to recite that.” We appeal to the Muslims to read the scriptures of their ancestors like the Vedas, the Gita, the Upanishad and the Vedanta. After seeing Yama, Hell could be one’s destination. But, after perceiving Omnipresent Godhood, Hell as a destination is impossible. From this perspective, Allah who is seen on Judgment Day, is evidently comparable to Yama.

Commentary:  If Allah had sought victory, why did He lose? If He can create anything and everything by His command, why did He not obtain victory over infidels in spite of His attempts? If Allah hates the kaffirs, then the kaffirs will hate Allah too; because this is plain human nature. Hatred is not at all a sign of Godhood but denotes a very narrow mentality. In many verses of the Quran, those who have not accepted the religion of the Quran, are called kaffirs; and in many verses, the Quran advises the followers to perpetrate atrocities upon the kaffirs. Non-acceptance of an irrational Faith without any philosophy is a sign of humanity. And, the instigation to commit atrocities is anti-dharma. This needs no explanation for one endowed even with basic common sense. The believers have been gaining ground since kaffirs are following bhavavada (sentimentalism).