Exploring the history of Hindu festivals: the ancient strands of Holākā 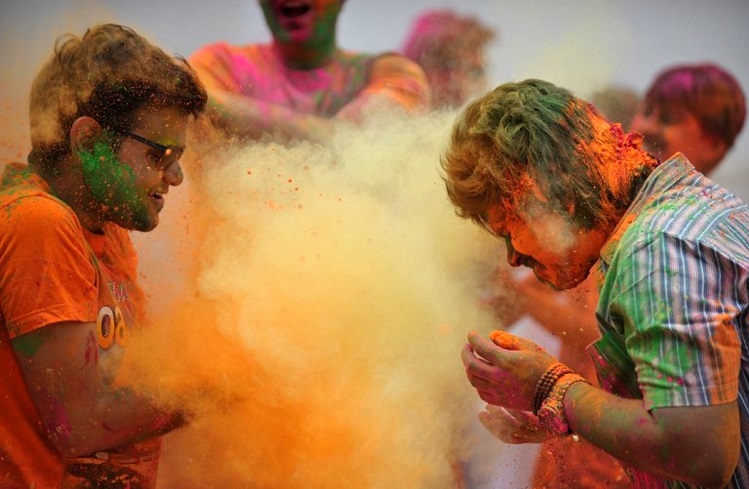 In Hindu tradition there is a clear demarcation of at least three distinct classes of ritual observances: 1) The most conservative of these are the śrauta rituals that deviate little from their Vedic prototype specified in the texts known as the brahmaṇa-s and śrauta sūtra-s. 2) The next are the gṛhya or domestic rituals, which are associated with the major events in an individual’s life such as birth, naming, studentship, marriage, setting up of a household, and death. These show a conservative core going back to the earliest Vedic age or earlier, specified in texts known as the gṛhya sūtra-s, along with later accretions coming from texts known as the purāṇa-s, local customs and sectarian traditions. 3) Finally, we have the festive observances, which are followed by the whole of Hindu society including the lay people. Examples of these include Indradhvaja, Dīpāvalī, Holākā (commonly called Holi in Northern parts of India) and vasanta-pañcamī.

Of the three, the śrauta rituals are practiced by very few people today and are largely unknown to the modern lay Hindus even though the foundations of their dharma lie in these rituals. The gṛhya traditions are somewhat more widely known, though they too are declining among the Hindus of urban India. In contrast, the festive observances are still widely known and practiced. However, unlike the śrauta and gṛhya rituals the festive observances are much less tethered to the canonical texts and are greatly prone to local variations. Indeed, this distinction is clearly recognized by the great theorists of ritual in Hindu tradition, i.e. the commentators of the mīmāṃsa system, who explicitly distinguish these festivals from the rituals ordained by the words of the Veda. Nevertheless, these festivals are likely to have been of great antiquity in the Indo-Aryan world because at least some of them correspond to festivals of comparable intent observed elsewhere in the Indo-European world. The earliest references to these festivals are seen in the sūtra-s of the 18th pariśiṣṭha of the Atharvaveda (the Utsava-sūtrāṇi), which provides a list of such observances that are to be supported by the state.

We believe it is important that the history of these rituals be closely studied as it provides clues to understand our past and the role they played in the well-being of the people. Indeed, it was for this reason the great king Bhojadeva Paramāra paid great attention to their description and observance. Two centuries later these observances were studied and described at length by the great encyclopedist Hemādri in his Caturvarga-cintāmaṇi. Unfortunately, the loss of Hindu power to Islam and Christianity resulted in the memory of the old practices being forgotten to a great degree. In our times the systematic study of the early lay or social observances of Bhārata was done by the great Sanskritist V. Raghavan. His work was published with assistance of his successor S.Janaki because of his death before it saw print. Our intention here is to merely revive the study of these observances with an examination of the early history of Holākā. We must stress what we present here is largely indebted to Raghavan’s work along with some additional observations.

[pullquote]Pūtanā was originally a fierce kaumāra goddess who was completely demonized in the vaiṣṇava narrative.[/pullquote]

The earliest mention of Holākā is in the 18th pariśiṣṭha of the Atharvaveda in the form a brief sūtra:

Now on the night of the phālguni full moon is Holākā.

This continues to be its date of observance to the current day. The verse of the Gāthasaptaśati of the Andhra king Hāla refers to getting “dirty” in the phālguṇi festival:

In the phālguṇi festival someone innocently colored you by throwing dust,

Why are you trying to wash that away, when it has been washed, by the sweat flowing off the nipples of your pitcher-like breasts?

Look! Sitting in the shadow of the lotus which is her face,

dusted by the powder thrown up as she grinds for the festival,

are her two fair breasts sitting like a pair of royal swans.

Not unexpectedly, such frolicking in the festival could have negative consequences. Indeed, a Mahārāṣṭrī Prākṛta gātha attributed to the same work of the Andhra monarch preserved only in the Telugu country sarcastically states:

With breasts colored by the festival’s powder,

with a lotus as ornament and mango shoot behind the ear,

you are, girl, a real honor to our village!

Thus, one may say that by the beginning of the common era when the Andhra-s held sway, the key elements which define Holākā were already in place: the color play and the drunken revelry. These are mentioned in authoritative medieval digests on festivals which collect material from earlier texts. For instance, the Varṣakṛtyā-dīpikā says that the people smear themselves with ashes from a bonfire (see below) and color powders and prance about like piśāca-s on the streets (grāma-mārge krīḍitavyaṃ piśācavat).These are features of the festival that persist to the current day.

However, these are not the only elements that characterize the festival. Hemādri in his account of the Holākā festival provides information from the now lost account of the Bhaviṣyottara purāṇa. This records an interesting tale that is not widely known among modern Hindus:

“When Raghu was the emperor of the Ikṣavāku-s at Ayodhyā, the lord of Lankā was a Rākṣasa known as Mālin. His daughter was a Rākṣasī known as Ḍheṇḍhā (In some texts Ḍhuṇḍhā). She attacked the city of Ayodhyā and wrought much havoc by slaying the children in the city. Raghu advised by his preceptor Vasiṣṭha asked the people, particularly the youngsters, to gather cow dung, leaves and logs, and place them at the center of a decorated enclosure. They then set these afire and went around the pyre shouting, singing and calling out obscene words including the names of male and female genitalia in deśa-bhāṣā-s . Then they clapped their hands, made a noise by striking their open palm against the open mouth (bom-bomkāra) and shouted out the words aḍāḍā and śītoṣṇa. Surprised by the obscene language Ḍheṇḍhā started running and fell into the pyre and was burnt to death.”

In this account aḍāḍā is described as the mantra of Holākā by which the Rākṣasī is driven away and the fire is said to be the homa in which this mantra is practiced to bring welfare to the settlement. Several variants of this basic form of the festival are seen in medieval manuals for festivals. The Jyotir-nibandha specifies that the fire for the Holākā pyre should be brought by children from the house of a caṇḍāla woman who has just given birth. It mentions an effigy of Ḍheṇḍhā along with a five-colored flag being set up for burning. The Puruṣārtha-cintāmaṇi additionally specifies a cattle race at midday for the Holākā festival. A paddhati from the Tamil country specifies that scorpions, snakes and centipedes are made out of molasses and thrown into the Ḍheṇḍhā pyre.

The legend of Ḍheṇḍhā has been recycled into two vaiṣṇava narratives which are more popular today: 1) She is known as Holikā, the sister of Hiraṇyakaśipu, who loses her invulnerability to fire and perishes in an attempt to burn her nephew the daitya Prahrāda. 2) The Holākā fire is supposed to commemorate the killing of the rākṣasī Pūtanā by Kṛṣṇa Devakīputra – Pūtanā was originally a fierce kaumāra goddess who was completely demonized in the vaiṣṇava narrative.

The common element in all these narratives is the protection of children from harm. Indeed the kaumāra goddess Pūtanā is described as being a deity of pediatric illnesses, from which she provides relief upon being given ritual fire offerings and bali. The junction period between winter and summer in India is marked by several illness that afflict children. This might indeed have been the rationale behind this facet of Holākā. Likewise, in rural India, the coming of summer heralded the emergence of scorpions, centipedes and snakes from hibernation. This appears to have found expression in the ritual offering of images of these animals in the Holākā fire.

Unlike the vaiṣṇava-s, the śākta-s gives a positive color to the narrative of Holikā, wherein she is described as an incarnation or emanation of Caṇḍikā, who fought a great battle with a daitya known as Vīrasena, and slew him on this day. Thus, it is his effigy which is burned accompanied by the worship of Holikā devī, followed by the śākta observance of the Vasanta-navarātrī. Thus, it is symmetrically placed in the calender with respect to the exploits of the great trans-functional goddess celebrated in the autumnal navarātrī. This account is elaborated in an eastern text known as the Holikāmāhātmyam.

Thus, multiple elements have been melded together into the Holākā festival. Of these the element involving the color play and obscenity probably relate to it being an ancient festival of love. Indeed, an aspect of this is obliquely recorded in the Nārada-purāṇa by noting that it marks the burning of Kāma by Rudra – a feature which survives to the current date in the form of the green twig representing Kāma being placed in the Holākā bonfire. In certain accounts the people from the Ārya varṇa-s freely touched people from lower jāti-s on this occasion, and this action was supposed to help provide immunity from diseases. Thus, the festival might have additionally had an angle of establishing social cohesion.

Finally, right from the first few centuries of the common era, as indicated by the great mīmāṃsa commentator, Holākā appeared to have had a patchy, regional pattern of observance. According to him it was observed only by easterners. Such a regionally restricted pattern is observed even today with the festival lacking prominence in much of the peninsular south. This is paradoxical because it appears to be an early festival alongside the ancient Indradhvaja and Dīpāvalī. Moreover, it is attested in texts from all over India including places like Kumbhaghoṇa in Tamil Nad where the festival in no longer observed.

One possible explanation for this is that frivolous and obscene facets of the festival have resulted in being ignored in several parts of the nation. On the other hand in other places it was “domesticated” to a degree and continued to be observed. However, in very recent times it seems to be resurgent in several places where it was previously not observed. Hence, it is possible that it can be used as a means to counter imported western observances that serve as conduits for Abrahamistic memes.