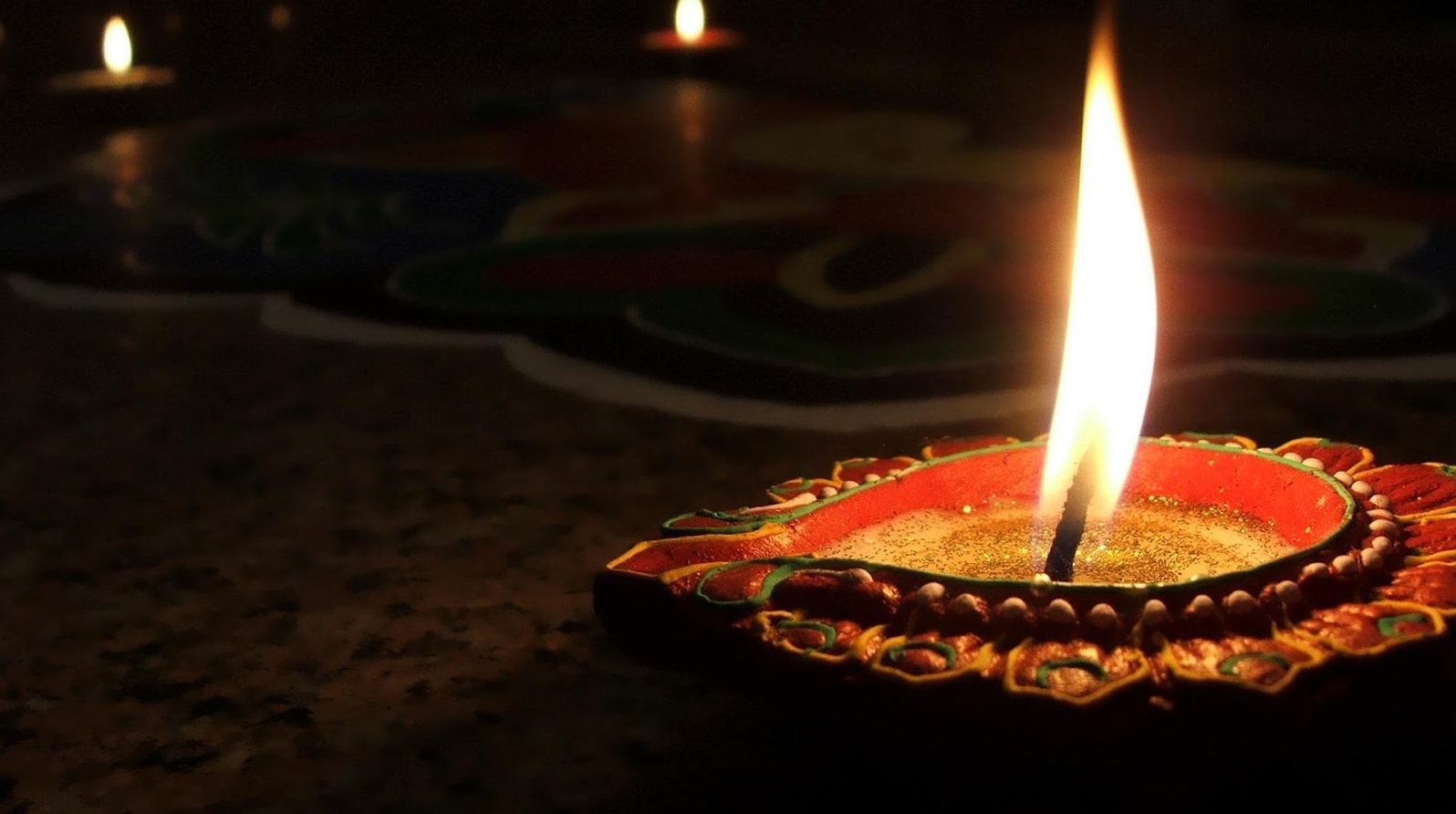 Never has Hinduism been at such crossroads with incessant attacks mounting from within and without, with a section of left-liberals joining the Breaking India forces and now employing judicial activism, all baying for the blood of the Hindu festivals!

The firecracker debate has brought all the chinks to the fore. It is very critical for us to take a few moments to reset the gaze within. Every battle involves not merely sizing the opponent’s strengths and weaknesses, but also our own. In this modern Kurukshetra, as Hindus, we are faced with a tough question – Do we forsake the symbolism in Hinduism or dig deeper to find its roots? Or should we let these forces digest and destroy us by being a passive observer?

Hinduism is clothed in numerous layers of symbolism and this is the only reason we are the oldest living tradition for many millennia, even predating the Saraswati valley civilization. Unlike the desert religions centered around Abrahamism, which focuses on the fear of going to eternal hell or the lure of heaven forever, Sanatana Dharma has be centered around values, raising oneself from a lower Self to a higher. Owing to a host of factors, for the past few generations, the Hindu society has been divorcing itself from these core ideals. The lingering symbolism in the form of culture, festivals, habits and etiquettes have been sustaining the Hindu civilization.

If one observes any Hindu festival, it is an admixture of some natural phenomenon, some deep historical relevance, an opportunity to take a break from the daily materialistic madness and an excuse to go inward – an exercise to immerse oneself with the Supreme Self. Our ancestors lived very closely with nature, observant of dharma and in harmony. As we have moved far away from this harmony, many of the practices, festivals and customs followed show up as huge problems or at least get highlighted as being anachronistic.

For instance, the practice of using Vermillion, a practice that has been proved to have existed during Harappan times by archeology has morphed into a mere fashion statement. The traditional way of making Kumkum is a lost memory for the most common people. This has been replaced with tons of synthetic chemicals and many cause side effects. In comes the western researchers, who highlight the heavy metal levels in Kumkum and shame the practice. This is then picked up by various anti-Hindu groups, who use these materials to mount an attack on the Hindu practices. The vacuum created by the shaken foundation is then used by radical and evangelical groups to proselytize Hindus.

Diwali or Deepavali is a festival that transcends the differences in Indian society. Various historical reasoning attributed for its observance includes the return of Sri Rama to Ayodhya and Krishna’s samhara of Narakasura. It provides an excellent opportunity for every individual to introspect and identify the dark qualities of the mind and destroy them. Whenever there is a destruction of tamas and the dawn of sattva in the mind, it is a cause for celebration. Hence, the outward expression of it by lighting lamps, bursting crackers and giving of sweets to everyone around.  Today this has been replaced by pomp and show, pride of bursting the biggest or the longest bursting firecracker in the neighborhood and the worst, sharing of sweets or snacks only with the few we like. It was a common practice to enquire anyone we came across, if they had their ganga-snana, but now, we are only interested in binge watching special television programs.

Obviously in this context, the firecrackers or TV watching or gouging of too many sweets will be rightfully deemed as going overboard. But if we return to the values of working on the character of oneself, which no one, not even a judge will have the temerity to question it.

Pongal or Sankranti, the quintessential harvest festival of India is an opportunity for being thankful to Nature, the Sun, the farmers and the farm animals. We, the practicing Hindus, have today reduced the festival into the very opposite of what it originally meant.

In south India, Pongal is also a time, when people do their spring cleaning. In the past, when people lived close to nature and in harmony, disposing the old by burning was ideal and cost effective, and was not harmful to the ecology.

Today we do not understand the significance of the symbolism, but burn vehicle tyres and other trash, which obviously add to the heavy pollution. Ripe target for cutting off the roots. Can we rediscover our eco-roots? Can we re-educate ourselves that Jallikattu is a bull taming sport that involves yearlong care of these bulls and maintaining the biodiversity of these breeds and not  a bull-killing festival on the lines of Spanish bullfighting as propagated by motivated media and animal-rights organizations?

Ganesh Chaturthi, a festival that unifies the different philosophies in the Vedantic world has been at the center of controversy as well. In the past, Ganesha murtis were only made of clay. This clay came from desilting the water bodies nearby, thus cleaning them. In fact, if one were to see the worship more carefully, we use only the least used materials – Calotropis, grass for archana and even the flowers that are favorite to Ganesha are lesser known locally sourced ones. The visarjan provided an opportunity of returning the clay to the water-bodies.

In came, the modern twists. Ganesha made of Plaster of Paris and synthetic chemical paints. From a journey of self-evolution and living close to nature, we have morphed it into a pompous display of a community. This is not to take away anything from the devotion of the ones who are true to the cause. The same fate bemoans Durga in Bengal.

Karva Chauth is a good example of how even private practices with no outward celebration can still be a target by the pseudo liberal brigand. These hit and run masters will question how a woman’s practice of keeping a vrath can help her husband. Praying for the well-being of the spouse is not acceptable for the feminazi gang.

Janmashtami Dahi Handi, noise levels of Dandiya during Navaratri – the list is endless. While the list keeps growing, no one seems to apply the same logic on the other communities. Forget the Pagan roots of even Christmas tree celebration, does anyone even demand for the trees to not be cut? Does anyone ever question the needless blood shedding of goats during Bakrid. The pollution advocates do not even mind the Azan calls multiple times a day. This shows the enormous anti-Hindu bias prevalent among media and activists of different hues.

The biggest danger, however, comes from the ill-informed Hindu society itself. We may have forgotten our roots, but that is not an excuse to remain ignorant. Can we rediscover the real meaning behind the festivities of this great land? Can we attempt to begin an inward journey? Can we get more committed to understanding what Dharma is and how to protect it?  Dharmo rakshati rakshitaha – the Dharma we protect will in turn protect us.

We must strive in every possible arena to keep the inner essence of Hindu practices intact and make it a living reality. In the case of Ganesh Chaturthi, it may mean we embrace our traditional clay murthis over those made using plaster of paris, or in the case of Diwali, we may have to celebrate with firecrackers as a collective society rather than as individuals.

Katha Upanishad teaches us about the two paths that exist with us all the time – Shreyas (the path of the good and righteous) and Preyas (the path of the pleasant). We must abandon the lure of false logic or arguments rooted in propaganda offered by various Hinduphobic forces, as they are nothing but the path of Preyas.

If we need to rediscover the meaning of our festivals, the teachings of Hinduism or achieve our highest potential by rediscovering our true Self, the following are imperative:

Remembering the origins and nature of the customs and practices is very vital. Being at the crossroads, we have a choice – do we succumb to the attacks of people who lack wisdom like our sages? Do we succumb from within, due to our ignorance and arrogance? Can we rediscover ourselves by trying to follow the wisdom by choosing the path of Shreyas?

I firmly believe that there is enough collective wisdom and memories left in our Hindu society that we can and will aspire to be on the path of Shreyas.