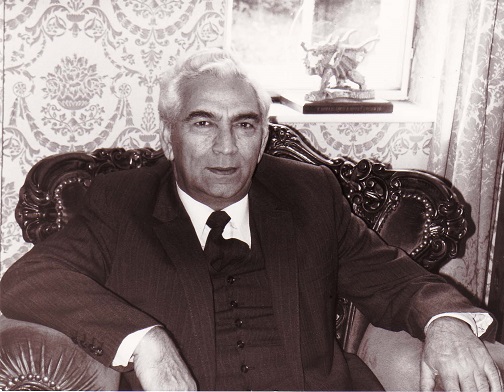 The following is an extract from a 40 page booklet titled “ISLAM” authored by the late Anwar Shaikh, my friend. Anwar published it in December 1994 through his own company named ‘The Principality Publishers, P.O. Box 918, Cardiff CF2 4YP (U.K.),’  because at that time it was not politically correct  in UK to criticize Islam so no publisher in UK would risk publishing the prolific writings of Anwar Shaikh. While Anwar did the writing he and his Welsh wife did all the rest, sharing the work load between them.

Nonetheless his writings spread like wildfire by word of mouth. Naturally he received threats of all kinds including but Anwar remained fearless. He was assured by the then government that there was no danger, because by that time the Salman Rushdie affairs had alerted the authorities. That was what Anwar told me.

The Prophet declared his nation and country is sacred by the force of revelation; he knew t hat his people could, not rule the world until they were welded into effective fighting force. So he formulated the doctrine of Jihad, i.e. fighting against the unbelievers for taking over their country, personal possessions and women, and subjugating them to the Arabian hegemony. This is how the doctrine of Jihad works:

1. He told the Jews; “If you become Muslim, you will be protected; otherwise you should know that the earth belongs to Allah and His messengers (Muhammad), and I want to expel you from this land”. (Sahih Albukhari. Vol. 4)

2. Since the ambition to possess the entire earth or the best part of it required military enterprise, the Prophet declared, “The paradise lies under the shades
of the swords” (Sahih Albukhari, vol. 4)

3. Since Jehad is against the unbelievers, the Prophet created unlimited opportunities for holy wars by declaring all other religions false and ungodly: “And whoever desires a religion other than Islam, it will never be accepted … ” (The House of Imran : 85)

4. The Prophet abrogated all other religions because he called himself to be the  apostle of all humanity: “Any Jew or Christian who heard of me but did not believe in me would go to hell”. (Sahih Muslim Ch.20)

In fact, the holy wars were the wars of national ambition and contained all those elements of savagery as did the wars of the infidels. Al Bukhari Vol. 8 has recorded some examples to this effect. Let me quote three:

1. The Prophet cut off the hands and feet of the men who belonged to the tribe of Uraina and let them die bleeding.

2. When men from Ukl committed crimes, the Prophet had them arrested. Their hands and legs were cut off, their eyes were branded with red-hot irons and they were thrown at Al-Harra, when they begged for drinking water, it was refused and they died thirsty.

3. Those who fought against him, he amputated their limbs and they died of bleeding. The prophetic attitude is justified on the authority of the Koran: “The only reward of those who fight against AlIah and the Messenger is execution or crucifixion or the cutting of hands and feet from opposite sides, or banishment from the land.” (The Table: 33).

Thus one can see that Islam is not a message of mercy but a secular code like all other contemporary codes. To perpetuate opportunities for war to keep Mujahedeen (warriors of Allah) on war footing, Islam is based on the hatred of non-Muslims. Consider the following:

1. Do not pray for your dead mother, father, relatives or friends, nor go near their graves, if they ‘were unbelievers. (Repentance: 189)

2. The believers must not take unbelievers for friends. (The Woman Tested: 10).

3. Muslims must wage a struggle against the non-Muslims and be harsh with them. (The Forbidding 5).

4. Slay the idolators wherever you find them.  (Repentance: 5).

5. Slay the idolators wherever you find them; take not to yourself anyone of them as friend or helper. (Women: 90)

6. God urges the Prophet to be tough with the unbelievers and assures him that they will not be able to resist him much longer. (The Confederates: 60).

7. God has cursed the unbelievers and prepared a blaze for them. (The Confederates: 65).

The Prophet made the sanctity of his own person as the corner-stone of the Islamic edifice. For-example, without believing in him, the belief in God is absolutely useless. The projection of himself as the Behavioural Model (USWA- e- HASNA) for the believers, no matter where they may be, has served as the fountain of Arab national superiority for countries.

As the ancestors of these foreign nations were invariably unbelievers, they started hating their own forefathers to love the Arab heroes. The Prophet’s assertion that the Muslims are one nation and the infidels are another, accelerated the process of the foreign Muslims’ unity with the Arabs, but as the Behavioral Model was Arabian, the relationship between the Arabs and the foreign Muslims became that of the leader and the led or the master and the slave.

As a result, the foreign Muslims have little or no loyalty to their own motherlands for being devoid of national honour. This is nothing but the miracle of the Prophet who imposed the everlasting hegemony of his own people on Muslims of foreign nations. I salute him and applaud his ingenuity because he has created similar relationship between Arabia and the foreign Muslim country as it exists between a burning lamp and moths; these insects are impatient to cremate themselves on its flame without any coercion on the paret of the lamp! This divine imperialism has no parallel in history.