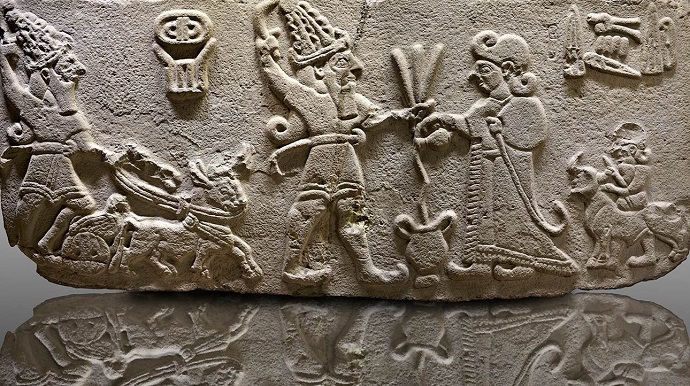 In a previous paper, I presented several general fallacies regarding Proto-Indo-European. In this I continue with more specific ones relating to Hittite, the oldest language and best attested in Anatolia.

1. In the previous paper, I pointed out that there are many points of resemblance between the I(ndo-)E(uropean) tongues in vocabulary and grammar (and other cultural aspects). This suggests that they are related as descendants of an original unified language spoken in prehistoric times, certainly before 5000 BCE and possibly at c 7000 BCE. Contrary to mainstream views which place the original homeland in the pontic steppes of South Russia or in an area in Anatolia, south of the Caucasus, I favour Saptasindhu, the Land of the Seven Rivers in what is today N-W India and Pakistan, and Bactria to the west of it. The name Saptasindhu is not at all arbitrary:  the RV (=Ṛgveda) repeatedly refers to sapta sindhavaḥ ‘seven rivers’ and the Avesta has the name Haptahәndu – which seems to be a transliteration of Sanskrit Saptasindhu.

Be the homeland as it may, I argued that the P(roto-) I(ndo-)E(uropean) language, the original of all the extant IE tongues, cannot be reconstructed and all the reconstructions so far are worthless.  Also, despite the claims of indoeuropeanist comparativists that they follow a “scientific” method in their reconstructions, there is nothing in their reconstructive philology even remotely resembling the method followed in the positive sciences, Physics etc, which test their finds against the ever-present reality of the phenomena in the material world.

The PIE does not exist anywhere except in the feverish fantasies of philologists. There are no tablets, clay or marble, no parchments or papyri, no wood or metal discs, with anything that can be identified as the PIE. We have only texts of the devolved extant IE languages. Consequently there is no “ever-present reality” against which the comparativists can test their reconstructions. Their reconstructs remain untested! Thus these philologists fail abysmally in their claim and, in fact, cheapen the scientific method.

2. Let me start with a simple aspect, easy to the comprehension of even people untutored in these matters: Hittite.

Almost all IEnists agree that Hittite is probably the tongue which as a dialect of PIE was the first to split away as its speakers moved away to a distant region. This, of course, will not hold if the urheimat is taken to be N-E Anatolia, south of Caucasus. If this area is our starting point, then Hittite and Armenian moved minimally.

Hittite, then, to put it differently, allegedly contains the most archaic features that are closest to PIE. One of these features is the absence of the feminine gender. This of course is ridiculous because since we have no PIE texts we can’t know for certain that PIE itself had no feminines. But because Hittite does not have this, it is assumed that PIE did not have it and therefore this becomes an archaic feature! It is not difficult to see how absurd this kind of circuitous thinking is.

However the matter does not stop here. Some IEnists claim (e.g. Fortson 2004: 118, Clackson 2007: 104) that there is no feminine in Hittite; but others, just as reputable mainstreamers, claim that while in historical times the extant language has no feminines, there are strong traces of the feminine and the absence indicates a loss of the feminine, not an original non-existence (Weitenberg 1987, Puhvel 1991, Melchert 1994, Watkins 2008: 14). So apart from anything else, our IEnists do not always agree among themselves, even though they are looking at the same data.

But why should suddenly, after the flight of Hittites, all the remaining IEs start developing the feminine? And if one looks at the Sanskrit enormous range of feminines ending in ā, ī, ū, is, us, p, m, t, d, dh, c, j, ś, etc. (the Avestan and Greek ranges are slightly smaller) the question becomes absurd. Ancient Egyptian and French manage quite well with only two genders. And so does English with is general one-gender system preserving the masc and fem distinctions only for living creatures (and fem “ship”!). So there is no ostensible reason why the production of feminines should begin.

We can consequently conclude that this is of no concern. Most probably there was a feminine gender as well as the masculine (or common) and the neuter (or inanimate, as in modern English which in its Old form did have fully the three genders). But the feminine got lost.

3. There are many more points that could be discussed. But the point of real interest to me here is the absence in Hittite of the eight closest human relationships: husband and wife; father and mother; son and daughter; brother and sister.

Avestan has all eight, we said.

Greek has seven – having lost the stem for “son”. The stem for sister is severely eroded as eor (only in the Lexicon of Hesuchios), while that for “brother” phratēr means ‘member of brotherhood, club’.

Latin has six. Not the stem for “son’ and “wife”. Even the stem patis (for S pati ‘master, husband’) means ‘capable’.

Germanic (considering all its ancient branches) has seven. Not the stem for “wife”.

Celtic has four –not for “daughter, husband, son, wife”.

Slavic has six – not for “father and wife”.

Even lesser languages like Albanian, Armenian and Tocharian have 2 or 3 at least of these stems.

Hittite has only one, pats (= pati ‘husband, master’) and this only in the sense ‘just’!

4. Hittite does not also have the stem for horse which is in S aśva, Latin equus, Gk hippos and (Mycenaean) iqeja, Celtic ech etc. Instead it has the word anśukurra which is of Sumerian origin.

There are many other stems common in IE languages that are absent in Hittite (e.g. in S arm bāhu, dawn uṣas, flesh māṃsa, nose nas, sun sūrya etc etc). For the stems here and in section §3, above, in different IE ancient tongues I have consulted J. Pokorny (1959) and Kazanas (2015, ch 2).

But, to return to the horse, whereas all major IE cultures have rites involving the horse (Indic, Greek, Roman, Celtic, Germanic), the Hittite one has none; instead it has similar rites but involving the bull. Thus while in India one aspect of the aśvamedha involves the queen lying and enacting the sexual union with (the effigy of a) horse, in Anatolia the queen lies down with the king during a bull sacrifice!

This is strange because the horse was known to the Hittites just as the bull was well-known to the Vedics (especially), the Greeks etc. Furthermore, in the Vedic culture, the Greek (Mycenaean) and the Celtic had a horse deity. The Hittites and others did not, but the Hittites regarded the bull as an emblem of divinity and worshipped the sacred animal (Kazanas: 2009:176).

5.  I stop here because this essay would extend to a greater length, without additional arguments, simply reinforcing the points made so far. But the Hittite religion/mythology is also very different from the many common IE themes except the one where goddess Inara (=Indra, perhaps) aids the Stormgod to kill a dragon – as Indra kills Vṛtra, while Iranian Thraetona, Greek Zeus, Scandinavian Thor and Russian Perun kill their dragon.

In its grammar also the Hittite language differs very considerably from other IE tongues. For instance Hittite has no:-

b) subjunctive or optative; it has only indicative (I do/am doing) and imperative (do, come; you must (not) do, come).

But Hittite has a periphrastic perfect as does Sanskrit (and Avestan) of all the IE languages in their early periods. This is formed with a main verb and an auxiliary. Thus in Sanskrit we have (Atharvaveda 18.2.27) –

It is formed with the accusative case (2nd vibhakti) of a feminine of the root-noun and the reduplicated perfect of the √kṛ ‘do, fashion, make’. Or we find vid-ām kṛ – ‘to have known’. Later in the Brāhmaṇas this is formed with the auxiliary √as ‘to be’ and √bhū ‘to become’.

In Hittite is used the auxiliary ‘have’ h̯ar- and the accusative of the neuter of the active participle: e.g. mar-kán h̯ar-te-ni ‘all-you have-cut’.

Other languages like Greek developed this kind of perfect later.

6. In case I am thought to load the dice against Anatolian/Hittite, I cite an eminent mainstream comparativist, P. Di Giovine: “The scarcity of moods typical of … the Anatolian languages … can be seen as a reduction undergone by the original system and not as an archaic, original feature itself, a feature antecedent to the formation of a richer modal system” (2009, 18).

Hittite does have an archaic, original feature. This is the neuters (or common nouns) in -r/n called “heteroclitic stems” but as these are found also in Greek and Sanskrit, the feature is not specific to Hittite.

Thus from the preceding data we can conclude that Anatolian is not at all close to the original PIE. Since it has suffered so many losses, it must have travelled a very long way from the homeland and it must have been subdued, then suffused with linguistic and other elements, from adjacent powerful, literate cultures.

The homeland could not have been the transcaucasian region (or N-E Anatolia) which is posited by some IEnists. The Hittites would have retained many more original features from the PIE. Several writers support the Hittite anteriority and the NE Anatolian urheimat by the method of using reconstructions of Proto-languages like Proto-Anatolian, Proto-this and Proto-that, which is, of course, highly unscientific since none of this can be found in original documents or can be verified independently

We must bear in mind that the Hittites are first mentioned in the 19th cent. and emerge into the light of History in the 17th cent. BCE. Thereafter they formed an empire southward that bordered with the Egyptians who had moved north up to Palestine. Consequently, it cannot be said that they were coerced into accepting elements from foreign cultures, but rather that they absorbed such elements because the memory of the homeland and its traditions grew weaker in a foreign environment with a very strong literate culture.

It is therefore unreasonable to take Hittite features as basic for the reconstruction of PIE.

Di Giovine P.    2009  ‘Verbar Inflection from “Proto-Indo-European” to the IE languages’ in Marcantonio Angela The IE Language Family… Washington, Institute for the Study of Man, JIES Monograph Series No 55.

Dr Nicholas Kazanas is a Greek-born (1939) scholar, Director of Omilos Meleton, Cultural Institute in Athens. He was educated chie!y in Britain: he read English Literature in University College, Economics & Philosophy in the School Of Economic Science and Sanskrit in the School of Oriental and African Studies, all in London. He did his postgraduate studies at SOAS, in Pune and Varanasi. He taught for some years in London. He has lectured often in Europe, USA and India and has many publications in Greek and in English (some in India) in peer-reviewed Journals and articles in Europe and USA. He is currently on the Editorial Board of several Journals of India.