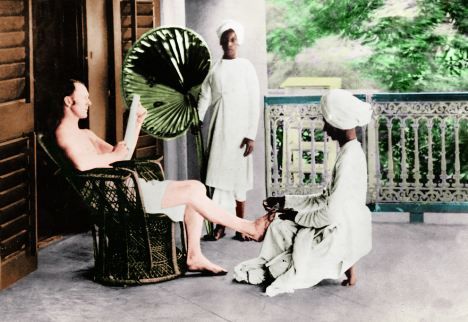 It would be farcical to use the words “peer-reviewed” and western, academic, Indological “scholars” in the same sentence. And even more ludicrous is the support they get from their Indian counterparts or fans who akin to monkeys jump up and down clapping their hands in glee every time these “eminences” make any claims. I am referring to those Indian “monkeys” (pardon my language) on the internet (mainly on Twitter) who slobber over the declarations of these “peer-reviewed” western, academic, Indological “scholars” each time they make declarations on anything Indian and especially AIT (Aryan Invasion Theory)-oriented, and who find fragrance and music in the farts and burps of these “scholars”, but have nothing but disdain for anything said or written by Indians – those who do not bear the “peer-reviewed” stamp. To these people, the emperor is wearing invisible clothes, because the western “peer-reviewed scholars” tell them that it is so, and an Indian who points out that he is not wearing anything only arouses their scorn and confirms their faith in their fond claim that Indians like me are not scholars.

While it is best to ignore what these pompous and self-opinionated people say or write for it is their easy way of trying to make themselves important by piggybacking on the reputations of well-known people and basking in the “prominence” and publicity that they feel this brings them. Genuine scholars such as Koenraad Elst, who had been engaged in an endless public tête-à-tête with one such troll calling himself “Team Zenji Nio,” finally decided recently to call it a day and to stop such blather:

However, the tweet that someone recently sent me for comments provides such a perfect example of this “peer-reviewed-and-Indian-monkeys” phenomenon that yours truly could not resist writing on it. So here is the tweet:

This mini-Kumbhakarṇa cites Michael Witzel’s (one of the “eminences” from Harvard University) quotation as a kind of gospel truth or veda-vakya. The fact that I have already replied in great detail exposing the fallacy and fraud involved in Witzel’s claim above is of course unknown to this “reader” who has not read. But it does not really require anyone to read my exposure of the utter untenability of Witzel’s above claim. The untenability should be clear to anyone who reads Witzel’s words and uses his brains since the answer is present in Witzel’s quotation itself — or if it is not clear, at least there is nothing in the claim itself that should lead anyone, however ignorant, to be so completely overwhelmed by what Witzel is claiming as to cite it as a clinching argument. The troll does not cite the specific “IE/IA words for local plants and animals,” which Witzel specifies before he writes the above: “The hypothetical emigrants from the subcontinent would have taken with them a host of ‘Indian’ words ― as the gypsies (Roma, Sinti) indeed have done. But we do not find any typical Old Indian words beyond South Asia, neither in the closely related Old Iranian, nor in Eastern or Western IE […] In an OIT scenario, one would expect ‘emigrant’ Indian words such as those for lion, tiger, elephant, leopard, lotus, bamboo, or some local Indian trees, even if some of them would have been preserved, not for the original item, but for a similar one (e.g. English [red] squirrel > North American [gray] squirrel)” (Witzel, 2005, p. 364-365). Earlier, he also argues against movement out of India on the ground of “absence of retroflexion” (Witzel, 2005, p. 361).

It is perfectly clear that tricky Witzel is attempting a sleight-of-hand trick here, knowing the gullible nature of his “monkey” fans. He gives us two different lists of words to prove two different things: he “proves” that the Iranian and other Indo-European (IE) branches did not emigrate from India by citing their failure to “take with them a host of ‘Indian’ words [….] such as those for lion, tiger, elephant, leopard, lotus, bamboo, or some local Indian trees” (i.e., the first list of words). And he cites, by contrast, the Romany language of the gypsies, whom even he accepts as having emigrated from India 1,000 years or so ago, who took with them and kept “a large IA vocabulary alive, over the last 1000 years or so“, such as “phral ‘brother’, pani ‘water’, karal ‘he does’” (i.e., the second list of words).

It is clear that he is giving two different lists to prove opposite points. Using the same materials and the same languages, but by transposing the two lists of words, we can prove exactly the opposite of what he claims to be proving: i.e., that the Iranian and other IE languages did indeed emigrate from India, but that, by contrast, the gypsies and their Romany language did not emigrate from India, and that the Iranian and other IE branches did take with them a large Vedic vocabulary with them and kept it “alive, over the last 5000 years or so,” such as “Persian birādar, Russian brat, English brother (Vedic bhrātar), Persian āb, English water, Russian voda (Vedic āpa, uda),” etc. By contrast, the gypsies did not emigrate from India, as proved by their failure to “take with them a host of ‘Indian’ words [….] such as those for lion, tiger, elephant, leopard, lotus, bamboo, or some local Indian trees,” as also by the “absence of retroflexion” in Romany (the language of the gypsies). The utter untenability of Witzel’s arguments is self-evident.

This is the level of honesty and integrity, of the rigor of the logic, and of scholarship, among the ranks of “peer-reviewed” (and “peer-reviewing”) Indological scholars and their “monkey” fans. I have already dealt with this silly half-baked argument many times in my books and articles (and even wrote a short blog article, in, I admit, a sarcastic and whimsical style, when Devdutt Pattanaik reiterated this half-witted argument: “Devdutt Pattanaik disproves the Out-of-India case“), but it requires to be hammered in again and again that this is the level of discussion and debate when it comes to the AIT-OIT (Out of India) question. As I showed recently in my blog on Witzel’s lies, all kinds of untenable and discredited lies will continue to be repeated and reiterated ad nauseam by the “peer-reviewed” academic gang and their “monkey” followers.

It is really up to us whether or not to continue to give importance to such pointless diversions.

While one would not want to get into the rut from which Koenraad Elst has finally extricated himself, of engaging in endless and pointless debates with trolls and pompous ignorant trolls, a reaction to the above article prompted this author to condescend to reply to it.

This is the screenshot:

The problem is that the admirers of the emperor’s invisible clothes just cannot resist the lure of the exciting descriptions of the clothes that the tailors have placed before them, and they continue to believe fervently and religiously that there are indeed magnificent clothes covering the emperor — even if they themselves cannot see them.

Sameer, a troll, says, “Old argument, and easily countered“. Where indeed has this “old” argument been countered before and by whom? The counter is apparently “Romani is heavily influenced by non-IA (Indo-Aryan) languages, such as Persian, Armenian, and the Slavic languages. But with regard to Avestan, almost all of its lexicon and grammar can be taken back to PIE” (Proto Indo European):

1. If that is so, why did Witzel give the example of Romany and contrast it with the other Indo-European (IE) languages, and why did this Witzel-bhakt quote the argument?

2. If Romany, emigrating from the interior of India a mere 1,000 years ago can be so completely influenced by other IE languages that it not only accepts words from those other languages, but  even abandons its original “Indian” words and retroflex sounds,  why should it surprise Witzel and his fans that the other IE branches, if they emigrated from the northwest of India 5000-4000 years ago, and been under the heavy influence of the completely unrelated languages originally spoken in all the areas that they later inhabited, should also have abandoned their original “Indian” words and retroflex sounds? This is the extent that they go to actually argue against the facts and against logic to give what they claim is a clinching argument!

3. About Sameer’s “beaver” mention: it is indeed an “old argument, and easily countered,” and has been countered by others long ago. Only Witzel and his fans continue to wallow in nostalgic darkness. As I pointed out in my book fourteen years ago:

The common non-Indian word, in the OIT scenario, can have developed in the region of Afghanistan and Central Asia, among the European dialects and proto-Iranian (see figure 3 in this chapter). And there is no case for any movement of the name into India: the word babhru occurs in the Rigveda, and in Mitanni IA, but as a name for a particular horse-colour. In the east, the word (found in later Sanskrit) was separately used as a name for the mongoose, but this cannot be as part of an Aryan movement into India in an AIT scenario, because in that case, the Aryans would have remembered the Rigvedic word babhru (which, seeing that it is also found in the Mitanni IA language, supposed, in the AIT scenario, to have separated from Vedic in Central Asia itself before the separation of the proto-Iranians, makes the meaning quite old and consistent) rather than a long-forgotten non-Indian use of the word in a distant land before an immigration already forgotten even in the Rigveda. And, as Gamkrelidze points out, after a short discussion: “It is notable that the Indo-Iranian languages are split by this isogloss: Sanskrit shows the more archaic situation, while Avestan displays the innovation” (Gamkerlidze, 1995, p. 448)” (Talageri, 2008, p.303).

But these “scholars”, and their chattering “monkeys” never read, and so all this is like water off a duck’s back.

4. As I said, I will try to avoid getting into the rut that Koenraad finally got out of, of replying to what in Marathi we call “rikām-tekḍas“, who can go on spouting venom or nonsense without tiring of it.

But yes, I would appreciate people writing blogs, articles or books claiming to point out all the flaws in my arguments, if they try to make a thorough job of it and not just try to make silly points. I rarely ever have to quote anything new: all the answers are already there in my books and blogs, and I can cite them in the context in one go. Otherwise, it is obviously difficult for other people to remember exactly what I have written at any point, and where.