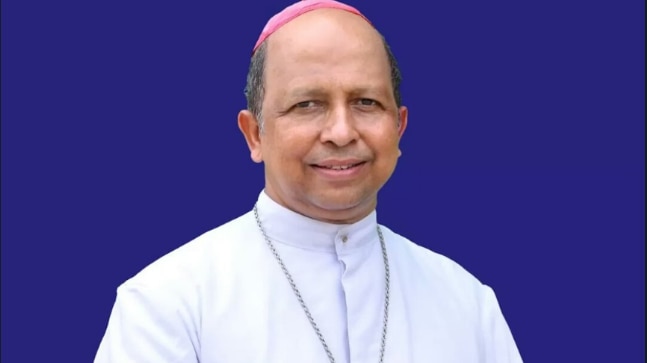 BJP members were mercilessly beaten to death in West Bengal to prevent them from contesting in elections. But the Archbishops did not feel any insecurity at that point in time. Despite a series of killings in Kerala, they never felt any turbulent atmosphere. When Sonia’s Government was in place things were good for them. But Modi government has literally spoilt sleep of these people.

Yes! Delhi’s Archbishop Anil Joseph Thomas Couto, in clear attempt to defame Modi in the run-up to the next Lok Sabha Elections, writes to people inviting them for prayers saying “We are witnessing a turbulent political atmosphere and pray to bring a better Government”. Many padres have commended this too.

The question now, why is there so much politics for all these guys who keep singing paeans of Jesus? Do we even realize the dangers of such people playing politics? This has been the problem wherever Church entered politics. This is not my personal views that wherever Church has entered politics, it has spread hatred, created ruckus in the society. To quote an example, let us consider the Spanish Inquisition. Jews, Muslims and Christians cohabited peacefully in Iberia for years together. Iberia was the one and only culturally diverse place in that region and exceedingly rich. It was said that you could buy the rarest of things in Iberia that you could never get anywhere else in the world. However, it lasted only till 1478. In 1391, Padres of the Church, did everything else except worshiping Jesus. He gave a call that every Jew should be converted. Thus began a violent phase. Jews had to be converted and baptized. They did convert in order to save their lives and avoid persecution. By 1450, those who converted also rose to higher levels in the society. Neo-Converts (as they were referred to by Native Christians) despite being larger in numbers where leading their lives peacefully. This was not to the Church’s liking. On the other hand Catholic Monarchs Isabella and Ferdinand were pursuing the dream of One Nation-One Religion. Seizing this opportunity, Dominican Friar Tomás de Torquemada approached the monarchs, sneaked saying Neo Converts from Jews & Muslims were secretly practicing their own religion. He further requested them to launch an inquisition and ordered death penalty to the heresies. Starting from 1st November 1478, the Spanish Inquisition resulted in execution of thousands of people. Church was responsible for killing so many people in the name of religion. Thousands of Jews and Muslims girls were raped and murdered too. Primary reason for this is entry of church into politics.

Not only that – Papal Inquisition of 1233, Spanish Inquisition of 1478-1834, Roman Inquisition of 1542-1700 and all such disasters in Europe – all were because the Church instead of its primary objective of focusing on Jesus and forayed into politics. This evil misdeed has resulted in death of lakhs of people.

They are now trying to employ same kind of tactics in India and we are not realizing as it is in the early phase. They had never gone to the extent of ordering thus far. Only because Muslims issue more number of Fatwas periodically, would there be increased communal disturbances.

It is very likely that the moment a church is established it will try to enter the political space. Lighting lamps, prayers etc. are mere masks. Obeying and implementing the diktats issued by the priest, and following the prayers is the fundamental duty of every Church goer. According to New International version of the Bible John 15:19, Jesus himself says “Followers of Jesus don’t belong to this world. They are different”. On the one hand they proclaim that nothing in this world is absolute, yet they dabble in politics. Shouldn’t they limit themselves to lighting candles or using rosary beads with cross?

They will never be able to remain that way because, they don’t follow Jesus or Bible. Just like how politicians start swearing by constitution or dalits whenever it suits them, so too is done by the Padres and Archbishops in the Churches, and they are slowly creeping into political space of secular India. Church does not care about constitution or secularism, because it doesn’t function under constitution. In a secular nation, we have the right to ask question. We try to seek explanations and demand logical answers. However, in the church nothing is questionable. They don’t believe in debates. Their stock response – God has ordered this. Just do it. Is it even remotely possible for these people to pray for the good of the country?

If you thought these prayers comes free, then you are mistaken. They earn in crores and not lakhs. As per FCRA reports, Rs 85,000 Crores has been received as donation by various Indian NGOs. 15 Foreign NGOs remit maximum funds to India. Of which 13 NGO are Christian (Church based) NGOs. Swearing on Jesus and Mary these NGOs are not spending a single rupee for Jesus. It is for conducting prayers like these against Modi and against BJP. Based on the intelligence reports, this funding is meant for carrying out protests and demonstrations to disrupt developmental projects of India. A few years back Modi government had imposed restrictions on foreign donations and rendered many NGO’s ineligible.

It is not for the first time that such statements of Archbishops are carried by many newspapers, incidentally many of which, the author feels, are not fit for packing road-side Bhelpuri. In 2017 during the Gujarat Assembly Elections in Gandhinagar, Thomas Ignatius MacWan said, “it is our responsibility to defeat Nationalistic forces. Elections in Gujarat can bring big changes”

Even during the recent elections to Tripura, church had asked the congregation to distribute pamphlets for same purpose. Baptist Church of Nagaland went a step ahead and even campaigned against BJP-Hindutva forces. As we delve into the past of Christian programs, their thoughts and objectives of these programs, a more dangerous information surfaces. It is a complicated web. As we decode step by step there seem to be no end to it. The very folks who write letters now have forgotten that in 2016, it was Modi Government that helped release Father Tom from the clutches of ISIS who had taken him hostage. When ISIS had threatened to behead Father Tom, these Anil Josephs did not conduct any prayer meeting and even Jesus could not save the hostage. Did these people not feel any insecurity or disturbance in the country then? Did they write a letter for the violence by ISIS?

Amit Shah has taken these repeated letter writing by Archbishops rather lightly. He has also indicated that it works to BJP’s advantage if they write such letters. It is more than enough if they write such letter and get 100s of people into the church. Pretend to be praying, which happens only for just a minute and later keep brainwashing the innocent minds of the people against Modi, Hindu Religion and India for hours.

During the Government of Sonia Gandhi, there were no such letters. In fact Hindus may not even had heard of the term Archbishop. Modi has also rubbed it in. While Sonia Gandhi announced scholarships for Christians, Muslims, Buddhists, Parsis and dalit students, Modi turned it down in Gujarat saying it cannot be religion/caste based.

Assuming that Church forays into politics in secular India, will it stop taking orders from the Vatican? Will stop listening to the Pope’s advises? Never! The churches here work under the instruction of Vatican. All the priests, bishops, and archbishops are nominated from the Vatican. This is the truth and cannot be denied. It is Pope’s Official nominee who would be the archbishop. Resignation of the Bishops has to be submitted to the Pope.

Think! They feed off India but their loyalty lies with Vatican. With such an evil history, would they ever pray for the country? Don’t wait till they trigger a fight among ourselves. WAKE UP!