Five Puranic and Epic tales about the North East 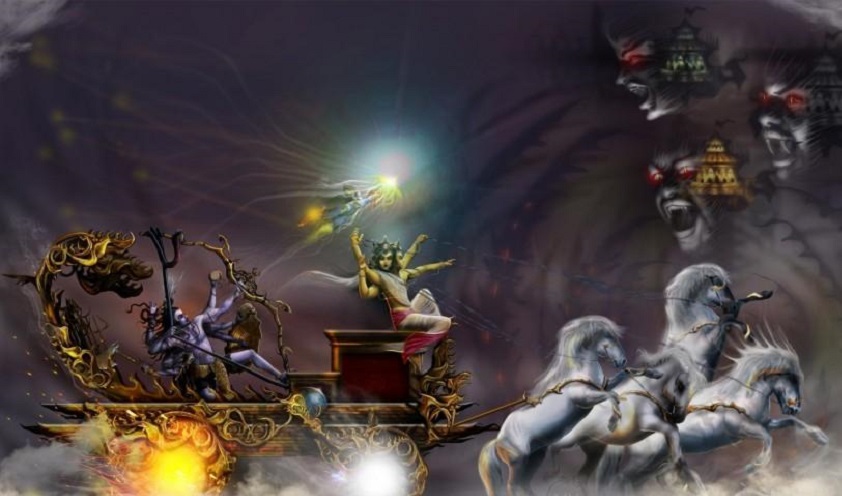 When we talk about national integration and unity, there are voices which state that it is incorrect to assume that India is one nation. The reason given is that many residents of certain states may feel themselves to be different from the nationalist vision and history of India which shares cultural unity.

The most notable example of this false understanding is the region of North-East. But if we care to go through our ancient epics and purnanas, we discover that many regions of the North-East have played an important part in our socio-cultural discourse. We present the important characters and incidents which are connected to the North-East.

1. Chitrangada – In the epic Mahabharata, Arjuna travelled the length and breadth of India during his term of exile. When he came to ancient Manipur, he met Chitrāngadā, the daughter of the king of Manipur, and asked her father Chitrabahana for her hand in marriage. The king stated that, according to the matrilineal customs of his people, the children born of Chitrangada were heir to Manipur, and hence could not be taken away from Manipur. Arjuna agreed to the stipulation that he would take away neither his wife Chitrāngadā nor any children borne by her from Manipura and wed the princess on this premise. They begot a son who they named Babruvahana.

2. Uloopi– Again, in the Mahabharata, Uloopi was the widow Naga princess who became infatuated with Arjuna when he was in Manipur. She was the mother of Iravan and also played a major part in the rearing of Arjuna and Chitrangada’s son, Babruvahana. When Arjuna cursed by the Vasus after he killed Bhishma in the Kurukshetra War, she redeemed Arjuna from the curse.

3. Tripura -According puranic lore, the demon Taraka had three offspring named Taarakaaksha, Kamalaaksha and Vidyunmaali. These demon princes performed severe penance on Brahma and were blessed with immense powers. Brahma, in addition, presented each one of them an aerial city revolving in the sky and rarely converging. These three cities or forts called Tripura continued to revolve in the sky for hundreds of years. Brahma blessed them that they would live for a thousand years in these three invincible, moving cities and that they would be destroyed only by an arrow that could merge the three forts into one and then set them on fire.

The demons, armed with this boon, mounted attacks on the devas and the rishis. Ultimately, the gods and the sages approached Shiva and pleaded for his assistance in removing this menace. Lord Shiva agreed to help them and created a bow and an arrow and a chariot with the various gods and goddesses. The moment the three aerial cities converged, Shiva mounted his chariot and moved upwards. He took out his bow and arrow, and hit the converged cities with a single arrow. With Brahma as the charioteer, he sped across, and shot a single arrow of fire, which was created of Vishnu. This cosmic arrow destroyed the three cities. This is how Shiva created the kingdom of Tripura from the ruins of these cities and was bestowed the title, Tripurantaka (destroyer of Tripura).

4. Narakasura –According to the Bhagavata Purana, Narakasura is the asura son of the earth goddess Bhudevi and Varaha, the third avatar of Vishnu and grew up to be a demon through his close association with the demon Banasura. He established the kingdom of Pragjyotishapura after overthrowing the last of the Danava king Ghatakasura. Bhudevi sought the boon from Vishnu that her son should be all powerful and Vishnu granted the boon with the condition that he would be destroyed by a later incarnation of Vishnu.

Considering himself to be unrivalled in prowess, Narakasura turned his eyes towards Swargaloka. Even the king of Devas, Indra was not able to resist the attack and fled. Narakasura had become the overlord of both the heavens and the earth. He then stole the earrings of Aditi, the heavenly mother goddess, and usurped some of her territory, while also kidnapping 16000 women.

All the Devas led by Indra went to Vishnu to ask him to deliver them from Narakasura. As promised to Bhudevi, Mother Earth, Narakasura was allowed to enjoy a long reign till the arrival of Krishna. Aditi, who was related to Krishna’s wife Satyabhama (believed to be an Avatar of Bhudevi), approached Satyabhama for help. When Satyabhama heard of the Narakasura’s ill treatment of women, she asked Krishna to wage a war against Narakasura. As promised to the Devas and Aditi, Krishna attacked the great fortress of Narakasura, riding his mount Garuda with Satyabhama in tow.

The battle was ferocious with Krishna gaining the upper hand after slaying Mura, Narakasura’s general. Thus Krishna is called ‘Murāri'(the enemy of Mura). When Narakasura tried to kill Krishna, he was beheaded with the Sudarshana Chakra (discus). Before dying, the Asura requested a boon that his death anniversary should be celebrated by all people on earth. This day is celebrated as ‘Naraka Chaturdashi’ – the second day of Deepavali.

According to the Puranas, the kingdom of Pragjyotisha was located in present-day Assam. Narakasura is cited as the progenitor of many dynasties that ruled Assam in historical times. A hill to the south of Guwahati is named after him.

5. Banasura-He was a mighty asura ruling over a vast kingdom. An ardent devotee of Shiva, he used his thousand arms to play the Mridanga when Shiva was performing the tandava dance. Shiva gave Banasura a boon and Banasura requested Shiva to be his protector. Banasura then became invincible. As time passed, Banasura become cruel and arrogant. He locked up his daughter, Usha in a fortress because many young suitors came to him asking for her hand. One day, Usha saw a young man in her dream and fell in love with him.

Chitraleka was a friend of Usha and daughter of Kumbhanda, the Minister of Banasura. Chitralekha was a talented artist who helped Usha to identify the young man seen in her dream, by sketching various portraits. She had dreamt of Aniruddha, the grandson of Krishna. Chitralekha, through supernatural powers, abducted Aniruddha from the palace of Krishna and brought him to Usha.

Although surprised at first, Aniruddha gradually reciprocated Usha’s feelings. Upon discovering this, Banasura sent his guards to seize Aniruddha but the valiant youth slew his assailants with an iron club. Banasura then brought his magical powers to imprison Anirudddha.

After some months, when Krishna came to know where his grandson was, he launched an attack on Banasura with a big army. The battle ended with Banasura’s defeat at the hands of Krishna, who severed all of the 1000 arms of the demon sparing two. At that point, Shiva intervened and fought against Krishna because he had promised protection to Banasura.

Both Shiva and Krishna fought an intense battle against each other. In the end, both the Gods stopped their battle as Krishna decided that Banasura, now having only two arms and limited powers would be allowed to live. Grateful, Banasura had Aniruddha and his bride, Usha, brought to Krishna in a regal chariot. All of them returned to Dwaraka, where Krishna’s victory in the combat with Banasura was celebrated with festivity. Banasura is said to have his capital at Sonitpur which is in present-day Tezpur, Assam.