Foot bridges as keys to some village futures 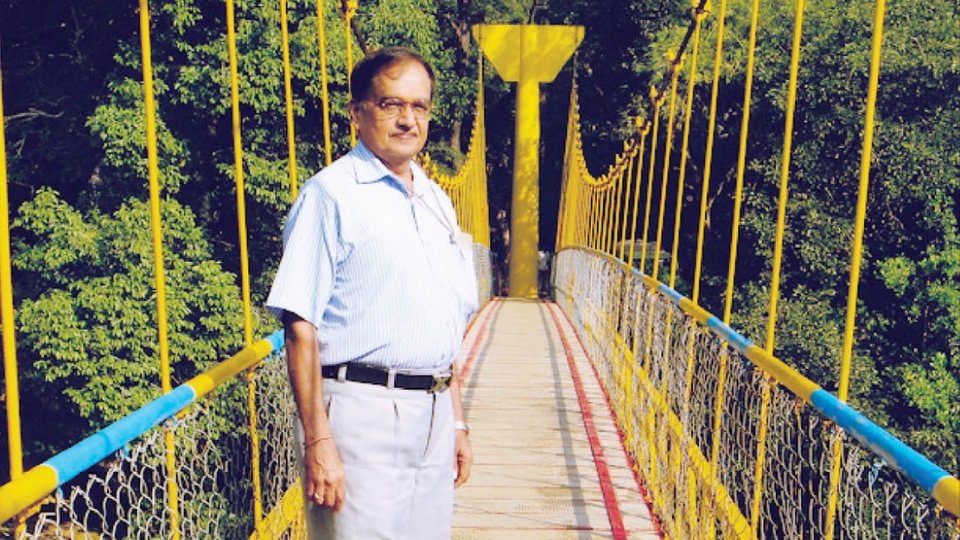 Frequently, when we despair of where India is at the moment we do one of these three things: first we turn on the Government and critique it for all ills, next we decry ‘apathetic, lazy Indians’ who do nothing for themselves and finally, we propose solutions from elsewhere and moan in exasperation,”why can’t we simply, just, etc….?” Here’s a story which will convince you that -uncelebrated by the main media and consequently, you- whole communities are pro-active, innovative and do not wait for the Government to help them. All they usually need is a sensitive individual to make their dreams come through. Individuals like Girish Bharadwaj.

The western Ghats around the border of Karnataka and Kerala are a bewitching sequence of green hills and valleys, balmy sunshine, friendly smiles, ample houses — and countless rivers. They are of all kinds and variety. The hills soak the rains and create streams, waterfalls, rivulets and whole rivers. They sustain the people –but oftentimes cut them off from mainland life.

There are hundreds of villages in these parts that need to use boats or coracles in their daily lives. To an occasional visitor this is a rather charming way of life. The mind is drawn to imagining how lovely it would be to live here without a care or a stress. You could too, unless you have children you want to send to school or college everyday or commute to a job or care for illnesses or have friends and relatives visit you with ease or wanted stable power and telephones. Around the monsoons the streams swell and cut the villages off. When they are in ebb children and the elderly must wade in the mud to reach the boat. For women it’s an indignity to hitch their sarees up to their knees. Frequently, young folk have found it hard to find brides or grooms: ‘alliances’ in places that may be cut off for months scare Indian families.

The story of how Girish Bharadwaj came to make a difference is interesting. His ancestral village, Arambur, in Aletty district is near Sullia town on the western slopes of Kodagu. But his family had moved long ago. His father was an engineer and Girish was born in Mangalore in 1950. He went to an engineering college in Mandya near Bangalore with only occasional visits to Arambur. Indian engineering curriculum of the seventies was –to put it charitably– classical. Not much emphasis was laid on experimentation or innovation. You got the sums right and you passed out into a world that hopefully taught you how to apply your basic knowledge.

In 1975 Engineer Graduate Girish Bharadwaj set up a small workshop in Sullia and instantly rose in everyone’s esteem. It was a time when India dreamt of becoming an industrialised nation and mechanical and civil engineers were held in awe. His was a modest repair workshop. The first break came when he got a contract to erect extruders and rollers for the rubber factory that Karnataka Forest Development Corporation was establishing nearby. The simple villagers employed as labourers saw the factory as a modern wonder. And Bharadwaj was seen as a wizard. Slowly, news of the young man spread.

Early one morning in 1989, a delegation from Arambur arrived at his house. As Bharadwaj heard with that sinking feeling you get when people grossly overestimate you, the village head-man said they had heard of his knowledge and skill. They had a request he must not turn down: the village wanted a foot bridge over their river Payasvini to lead them out of isolation. Sridhar Bhatt a village techno of Amchur –heading his own delegation– suggested as a starting point, the Lakshman Jhoola, a rope bridge across the Ganga in Haridhwar. Both villagers wanted stable versions of it with no yaw. They took him to Amchur where there was the rope bridge mock-up Bhatt had rigged between two windows across the street. There was no saying no now. The villagers had been smitten. They had their dream and they had their man.

“I came back overwhelmed by my sense of inadequacy,” says Bharadwaj. “My education had in no way prepared me to design and build a bridge. I was in panic.” He began to study bridges for the first time in his life. We have to imagine him in a small town in remote Karnataka, way back in the seventies when engineering education was ‘formally-British’ rather than ‘inventively-Yankee’. And there were no libraries to research in. He browsed a few civil engineering text books and quickly had a grip: he needed to build a ‘suspension bridge’. That was the most viable solution. And the only such bridge on which his books had some usable design information was the Golden Gate, San Francisco! Nothing less! That was the moment that spawned the suspension foot bridges of western India.

Bharadwaj got a hang on the design and worked out sizes and strengths. The pylons would be reinforced concrete and the suspension cable would be multi-strand industrial steel rope. The verticals were steel and the deck would be wooden planks, stayed against swaying. He approached the Regional Engineering College in Suratkal to go over his design. “Professor Lobo spent a lot of time over my design, made some changes and helped wholeheartedly,” he says.

Work began more or less simultaneously in the two villages with enthusiastic participation of the villagers. The bridges cost about Rs.100,000 each but in a revolutionary break from the habit of looking up to the government, villagers subscribed the whole sum in cash and kind. Bharadwaj had built in no profit. He also contributed his time and all the construction equipment. Many villagers laboured for no pay. Women served tea and snacks. Children gambolled. They had a party.

There were emotional scenes on the day the bridges opened. People simply, endlessly walked up and down the 87 m long Arambur foot bridge. Many choked with delight unable to speak. “I was at an extraordinary moment,” says Bharadwaj. “A middle aged housewife embarrassed me no end: she wordlessly fell at my feet, in thanks and looked up with her eyes full of tears.” He had not quite realised how much a bridge can mean.

The bridges at Arambur and Amchur became media darlings. There were public meetings convened to honour Bharadwaj. A full length Kannada movie –“Swati”– was scripted around the two bridges and became popular throughout Karnataka. And Girish Bharadwaj and his firm “Ayas Shilpa” [“Sculptures in Steel”] have had no rest since then.

He is a changed man, changed by the bridges he builds. And he sees the changes his bridges have wrought. Children target universities now and grooms are in plenty for village belles. Trade in village produce is booming. As these bridges have built in ducts for power and telephones these services are stable. Health emergencies are easily handled. And best of all these bridges don’t permit cars! A suspension bridge can be completed in 3 months as against the standard Government designs in concrete that take 3 years to build, cost ten times more and are ugly to boot.

As of the moment of writing Ayas Shilpa has built 48 foot bridges in all. And demand is steady. His longest is the 220 metres one, near Belgaum across the river Ghata Prabha. He is very open in helping communities that do not have much money. He guides them to places where they can scrounge old cables and usable steel. In 12 instances bridges have been slung between sturdy trees instead of costly RCC pylons. His mission is to connect people with opportunities.

Girish Bharadwaj’s story is instructive for those uninformed of India’s social dynamics. The establishment and the privileged classes may have had little time for rural India. But that hasn’t stopped it from exploring ideas and corralling learned people. India’s humble folk revere learning. Bharadwaj narrates the story of a strapping old man in Konannur. “He would spend hours everyday staring at the immense height of the pylons being constructed. He would shake his head in puzzlement. He neither came near me nor spoke to me. I learnt he muttered and wondered how they would use it– he thought one needed to shinny up the pylon before one crossed the bridge. When the bridge was finally commissioned and he understood the idea he was transformed by delight. For the first time in four months he came close to me and stood in open admiration,” says Bharadwaj misting over. “The elder then boomed: “Vidya dhoddadhu, Swamy!””

That translated from Kannada would read, “Sir, knowledge is supreme!” All of India believes that. And that faith is what will ‘make’ India.

The account was first published in GoodnewsIndia in 2003, and has been republished with author’s permission.