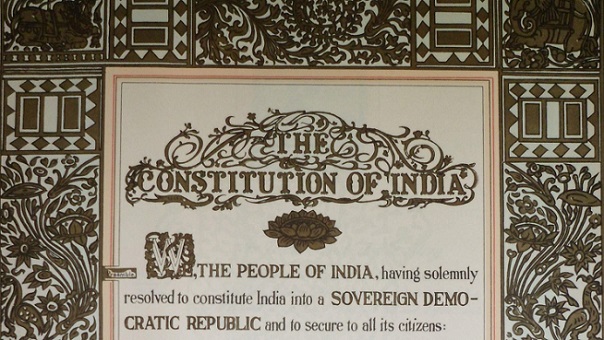 It is astounding that Minister for External Affairs, Sushma Swaraj, is being pilloried by our partisan media and secular chatterati largely consisting of ignorant WOGS (i.e., West Oriented Gentlemen) and their fellow travellers. She has been targeted for suggesting that the Bhagwad Gita should be declared as Rashtriya Granth, or the national book of India. Prima facie there is nothing wrong in the suggestion made by the erudite lady. After all, Gita is the soul of the millennia old Indian civilization. It is the celestial song sung by Sri Krishna to awaken and invigorate a faltering Arjuna in the battlefield at Kurukshetra.

It is being argued by some inadequately-read self-styled intellectuals and media mandarins that since our Constitution describes India is a ’secular’ nation, a religious book of Hindus, like Bhagwad Gita, cannot be designated as our national book. Ah, secularism!   But who forced the bogey called secularism into our Constitution ?

Time has come to inform the comatose Hindu leaders and our slumbering masses about the forgotten truth that the word, ‘secular’, did not exist in the original text of the Indian Constitution when it was adopted in November, 1950. The founding fathers  did not, repeat did not, describe India as a secular nation despite compulsive obsession of Pandit Nehru with this dogmatic western cult which is frequently pitted against ‘ dharma’.  Equally important is for us to remember that there was no mention of the word ‘socialist’ in the original text of Indian Constitution.   A massive deception practiced by the unconstitutional political rulers in 1977 was that the word ‘secular’ was foisted by late Indira Gandhi on the gullible Indian mass on the sly during the dark era of Emergency.

Why was it done during the years of Emergency when all rights of the citizens had been suspended and press too, was totally gagged ? No one knows, no one can explain. The questionable   word was forced into the Preamble in a clumsy bid to consolidate the minority votebank in 1977  by the then Prime Minister and her kitchen cabinet.  She added two mischievous words into the Preamble of the Constitution thereby converting India into a ‘socialist and secular’ Republic.  Perpetrated during the Emergency it was a fraud of monumental proportions.

This unwarranted intrusion into the Constitution was made through the 42nd amendment in 1977 when democracy was dead, voice of the people was muzzled and fundamental rights had been suspended. The Forty-second Amendment of the Constitution of India, officially known as The Constitution (Forty-second Amendment) Act, 1976, was enacted during the Emergency by the  government headed by Indira Gandhi. Most provisions of the amendment came into effect on 3 January 1977, while some other changes were enforced with effect from February 1, 1977.1

As highlighted on the website of Wikipedia, the “42nd amendment is regarded as the most controversial constitutional amendment in Indian history. It attempted to reduce the power of the Supreme Court and High Courts to pronounce upon the constitutional validity of laws. It laid down the Fundamental Duties of Indian citizens to the nation. This amendment brought about the most widespread changes to the Constitution in its history, and is sometimes called a “mini-Constitution” or the ‘Constitution of Indira’.2 Almost all parts of the Constitution, including the  Preamble  and the amending clause, were changed by the 42nd Amendment, and some new articles and sections were inserted. The amendment’s fifty-nine clauses stripped the Supreme Court of many of its powers. Additionally, the amendments curtailed the democratic rights in the country, and gave sweeping powers to the then Prime Minister.

Among other things, the controversial amendment gave to the  Parliament unrestrained power to amend any parts of the Constitution, without judicial review. It transferred more power from the state governments to the central government, eroding India’s federal structure. The 42nd Amendment also amended the Preamble and changed the description of India from “sovereign democratic  republic” to a “sovereign socialist secular republic” which was never the intention of the founding fathers when they drafted and passed the Constitution.

The Emergency era had been widely unpopular. But the most controversial misconduct was the clampdown on civil liberties. The Janata Party which had promised to “restore the Constitution to its original condition as it was before the Emergency”, won the 1977 general elections. They then brought about the 43rd and 44th amendments in 1977 and 1978 respectively, to restore the pre-1976 position to some extent. However, the Janata Party was unable to achieve its full objective because the government could not last long enough due to internal squabbles between party’s leadership.

On 31 July, 1980, in its judgement on Minerva Mills v. Union of India, the Supreme Court declared two provisions of the 42nd Amendment which prevented any constitutional amendment from being “called in question in any Court on any ground”, and accord precedence to the Directive Principles of State Policy over the Fundamental Rights respectively, were declared unconstitutional.   That historic judgement of the Supreme Court was tantamount   to legal censure of the conduct of the government led by late Indira Gandhi in turning India into a secular State.

It needs to be understood that in their infinite wisdom the founding fathers did not add the word ‘secular’, nor the word socialist in the Preamble of Indian Constitution. They knew that a Hindu-majority nation, supremely believing in tolerance, can never become a theocracy. History is a witness to the fact that our forefathers had magnanimously given asylum to the Parsis as well as the Jews when they were forced to run away after being persecuted in their own homelands. The founding fathers knew very well that according to our holy scriptures and millennia- old historical tradition Hinduism can never become a narrow sectarian faith.

When the Parsis and the Jews were being hounded out from their native lands, it was the Hindu rulers who gave them shelter – and that too, without imposing any pre-conditions. That is why the founding fathers of the Constitution did not declare India a secular State in the year 1950. On the contrary in spite of Pandit Nehru, they boldly affirmed the Hindu identity of India by incorporating 20 paintings from our ancient history to embellish the hand-written first copy of the Indian Constitution.

The twenty paintings displayed in the Constitution constitute clear reiteration of India’s ancient heritage and its Hindu identity by the founding fathers. First and foremost, the paintings depicted Lanka Vijay by Shri Ram, Gita Updesh to Arjuna at Kurukshetra by Karamyogi Krishna, Ganga Anayan by Bhagirath and portraits of Raja Vikramaditya, Gautam Buddha, Mahavira, Chhatrapati Shivaji, Guru Gobind Singh and Rani Lakshmibai of Jhansi. There is a painting of the Nalanda University, too. In addition paintings of Mahatma Gandhi and Netaji Subhash Chandra Bose, the two 20th century icons of India’s freedom movement, are also there.3

There is also one painting each of Moghul king Akbar and Tipu Sultan of Mysore in the Constituton. But these two paintings could not be construed by any means as the Constiuent Assembly’s endeavour to erase the Hindu identity of India. The clumsy attempt to belittle the Hindu identity of India,   presently writ large all over the original Indian Constitution, is a later day development carried out on the sly during the notorious years of Emergency by adding the word “secular” to the Preamble. Prima facie there are reasons to believe that a nefarious thought was occupying the mind of by the ruling sham-secularist gang and pro-left academia to conceal the truth from the future generations of India. At one time, it was a hush-hush rumour in the gossip bazaar of Lutyen’s New Delhi that an attempt was being made to remove these 20 important paintings from the Constitution. But that was not done, could not be done. Perhaps the enormity of the proposed insult to the Indian Constitution and the fear of Hindu backlash did not allow the leftist seculars to venture ahead on that path. Today’s youngsters do not know that the calligraphy of the hand-written copy of Indian Constitution was done by Prem Behari Narain Raina and it was embellished by Nandlal Bose and some other artists.

The hand-written Constitution was photo-lithographed at the Survey of India Office. Apparently, most journalists and tele-media analysts, too are are unaware of these facts. The aforesaid 20 paintings can be seen here. It is time that the present and future generations of India are made aware of the fact that the founding fathers never wanted India to be declared a ‘secular’ State. Nor did they consider it necessary to make India a ‘socialist’ State. This important fact stands conclusively proved by the depiction of 20 paintings of the glorious Hindu heritage and landmark ethos of our country permanently embedded in the original hand-written copy of the Indian Constitution. It was done ostensibly for the benefit of the posterity.

Time has come for Hindu nationalists to confront the morbid rants of the secularist ignoramuses by repetitively asserting that India was meant to be a secular State by the founding fathers ! In wisdom and strategic foresight the founding fathers of the Indian Constitution were much more far-sighted than Indira Gandhi and her atheist father, Pandit Nehru.

Logically the above mentioned amendments to the Constitution should have been rescinded immediately after the Emergency was over. But the governments led by Morarji Desai and Chaudhry Charan Singh could not complete the task due to internecine warfare in the Janta Dal. Now with the fresh winds of reawakening of national pride blowing across India, time has come to expunge the questionable words secular and socialist from the Preamble of the Indian Constitution. Most European countries have turned their backs on the suicidal cult of multi-culturalism which threatens to erase the Christian identity of Europe. Time has come to excise this monstrosity fom our Constitution.