Warrant Against Madhu Kishwar: Is Freedom of Expression only for Secessionists? 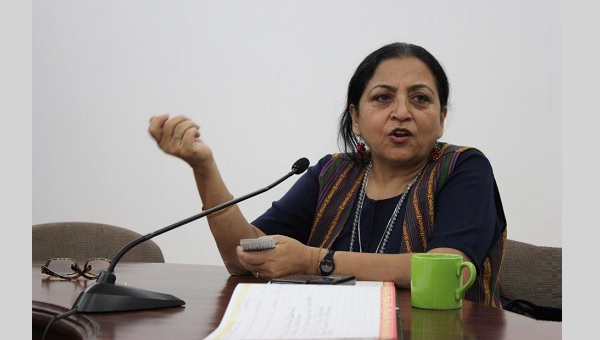 Editor’s Note: A Srinagar court has issued a non-bailable warrant against noted academic, writer and social activist Madhu Kishwar.  The warrant was issued on April 03, Monday in connection with a criminal defamation case filed by Shujaat Bukhari, the Editor in Chief of Srinagar based newspaper, Rising Kashmir. Bukhari had filed the defamation case after Kishwar had tweeted about how he follows the Pakistani script in his publication, despite receiving funding from Indian government agencies.

In response to the non-bailable warrant, Madhu Kishwar has published an article on her blog regarding the facts of the case and how it unfolded and IndiaFacts is reproducing the same here.

Background: In response to reports of politically engineered violent anti India protests in Kashmir I expressed my distress at the high decibel, pro-secessionist, anti-India propaganda launched by leading journalists and newspapers in Kashmir who seemed to be providing very provocative and lop sided coverage which romanticized those attacking the army and indulging in terrorist strikes and stone pelting

I made special mention of Shujaat Bukhari owner-cum editor Rising Kashmir not because his paper is theonlyexample of pro Pak journalism but because he is a favorite of leftists and he pretends to be defender of human rights- though only of terrorists!Prior to setting up his own paper, Rising Kashmir, Bukhari used to be Bureau-Chief of The Hindu for Kashmir.

The sum and substance of my tweets was that even though Bukhari takes money from government agencies—both state & central government, yet he parrots the Pakistani script.The Rising Kashmir coverage of the Pakistan engineered unrest in the Valley is very pro-secessionist. Incidentally Shujaat’s brother Basharat Bukhari is a senior cabinet minister in PDP government and the family is part of the power establishment of Kashmir. But like many other politicians and journalists Shujaat’s paper gives a pro-Pak tilt to the coverage of events in Kashmir.

In response to my tweets, Shujaat Bukhari filed a criminal defamation suit against me in December 2016.

Options before me: Petition the High Court of J&K for stay order on the arrest warrant, apply for transfer of case from Srinagar because my appearance in Srinagar court poses serious risk to my life and does not promise me a fair trial. I also intend to challenge CJM’s orders in defiance of Supreme Court guidelines at an appropriate level.

I am ready for the prolonged legal and political battle this involves, no matter what it takes.

It is noteworthy that Shujaat Bukhari does not deny my charge that his paper is pro-separatist and follows the Pak agenda. The only charge he has denied is that he takes money from Indian agencies. Is he willing to reveal where he got the funds to set up his paper? Who pays for his many trips to Pakistan, Dubai and other countries? Knowledgeable people close to him allege that Shujaat cultivates and curries favour with Indian intelligence agencies and Military Intelligence as a cover for his ISI links!

Shujaat should be willing to reveal where the money came from for his setting up three papers–two in Urdu apart from Rising Kashmir in English as well as a printing press. Is he willing to reveal how he  bought several prime properties in Srinagar? All this when the print edition of Rising Kashmir and the two Urdu papers he set up subsequently all have a minuscule circulation in the Valley! They are meant only to make money through government ads and other forms of patronage. He inflates the circulation figures to corner more ads and subsidised news print. Its only on the Net that Rising Kashmir gets some traction.

I have a right to ask him to reveal information about his financial affairs because in the interest of transparency, MANUSHI posts on its website accurate information regarding every rupee that it gets by way of donations or sale of its publications as well as audited accounts of how the money is spent. Is Shujaat Bukhari ready to be as transparent about the finances of his newspapers?

Even if we don’t  take into account undercover payments made to separatist leaders and journalists in Kashmir by ISI, can Shujaat deny that he seeks and gets advertisements from the state government as well as DAVP–which releases central government ads?

The big question I want answered: Why is the J&K government and central government patronising separatist newspapers?

The deafening silence of the champions of “freedom of expression”: Please note the deafening silence regarding this case in the “liberal” mainstream media. Compare it to the national and international media fury unleashed when a defamation case was filed against Ashis Nandy by an Ahmedabad based NGO for Nandy’s baseless  and outrageous defamatory statements published in The Times of India against Modi and Gujarati Hindus. He was projected by the entire media as a victim of “fascist” wrath. Top Congress party lawyers rose to his defence and argued his case up to the Supreme Court–all free of charge. But it didn’t make big news when Nandy ended up offering an unconditional apology for his defamatory article when the Supreme Court was on the verge of indicting him!

Or compare the media outrage over Teesta Setalvad being booked on proven charges of brazen corruption and siphoning off money collected in the name of riot victims being spent on personal luxuries and aiyyashi!

But in this case, there is total silence in the mainstream media and by the leaders of the Award Wapsi Brigade! I bet in their worldview, it’s not I who am the victim of lawless orders emanating from a Srinagar court in favour of an influential separatist newspaper. Instead, Shujaat Bukhari is likely to be seen as a victim of my ‘intolerance” against his freedom to help Pakistan break up India one more time.