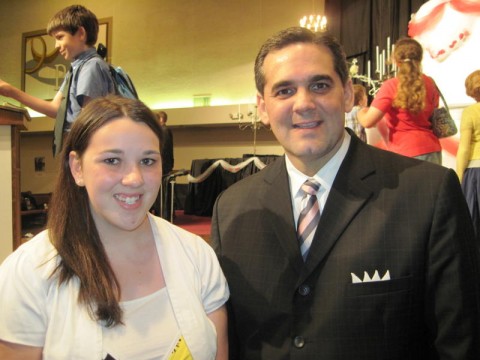 Update: Pastor of Heritage Baptist Church mentioned the following in his tweet…https://twitter.com/SethBuckner

Bob Gray II, the chief pastor of the Longview Baptist Temple, a church based in Longview Texas, tweeted thus on 6 August 2014:

Even a cursory reading of his Twitter timeline makes it amply clear that he is an unapologetic Christian Evangelist with a self-avowed mission to convert all non-Christians anywhere in the world.

The senior Gray in the past has been known for making some notably controversial statements. One of the most notorious was this reply of his to allegations that preachers of the Independent Fundamental Baptist groups are sex offenders:

..We are a “remnant” and a “peculiar” people.  We had to go underground at one point in history and we are not in 2014 in this to win a popularity contest.  Just look at the lack of morality not just in our country, but in our preaching and in the pews of these liberal preachers.  It appears the enemies’ attacks are only on the Independents and those conservative local churches of any group.  The common denominator is the fundamentalist message they teach and preach that is hated.  Thus, the messenger is attacked…

…No one is perfect; we are all dirty scoundrels. We have all offended and mistreated other people. If all of us seek vengeance towards those who have mistreated us, we will all be in trouble. If you continue to hold bitterness in your heart towards someone, you will never find happiness. You will die young because of hatred and bitterness. Instead, you should realize God has forgiven you of far greater sins than the sins people have committed against you. If He can forgive you, then surely you can forgive other people….

In other words, Bob absolves himself by claimingthat the fault lies with the accuser and society, not with his Church. What is more interesting is the person in whose defense Bob made the aforementioned statement. That person is a certain David Hyles.

David Hyles ran off to Indiana with one Brenda Stevens. Brenda Stevens had a young son, named Brent. In late 1985, 15-month-old Brent was found dead in his crib. David Hyles, who had been alone with the child, claimed he found him not breathing, and called police. In reality Dave called his father Jack Hyles first. Jack Hyles was on the scene long before the police were called.

At this inquest, it was revealed the investigation was thwarted because the little boy had been embalmed and buried the very next day— Jack officiated, the boy was buried before a proper autopsy could be performed.

The little 15 month old had nine different broken bones in different stages of healing. The case remains open to this day.

Was Dave Hyles banned from the ministry even after all the above? Oh no. In the 1990′s Dave moved by daddy where Dave taught Sunday school at a Pinellas Park Baptist Church in Florida. He was again kicked out of that church because of adultery.

Dave Hyles was then thrown out of the next church he attended (Berean Baptist Church in Orange Park, Florida), for “sexual misconduct” with three different women. One of those 3 women was the church secretary Joyce Phaneuf, who was arrested for prostitution in 2003. Joyce Phaneuf, her mug shot and arrest report — which notes the tattoo on her right-upper thigh, reading “David’s Girl.”

After all this, Dave Hyles finally married Brenda Stevens and the two had their own son who they named Jack David. In March 1999, Brenda Stevens said little 5 year old Jack David must have fallen out of her car, she didn’t know it, and she ran over her own son with her own car–killing him.

The mug shot of Joyce Phaneufis given below:

And this man was given a warm welcome by Pastor Gray on 27 October 2013.

Politically, Bob Gray Senior is a staunch Republican and known supporter of Rick Perry. As such he regards Homosexuality as an unpardonable sin and opposes gun control.If that was not enough, Bob Gray used the Grace Baptist Church’s (Troy, New York) pulpit to officially endorse Rick Perry for president. And on the same occasion gave away “M&P semiautomatic rifle, Smith & Wesson’s version of the AR-15.” (a gun dealer, The Oakwood Trading Post, sponsored the give away).”

That is unsurprising given the scary ideas of the Bible and the world and Jesus that the Independent Fundamental Baptist espouses.In short, IFB believes that Jesus commanded all believers to carry guns. It is worth quoting from the longer version, aptly titled ASSAULT RIFLES FOR CHRIST,of how the IFB operates, and what its guiding principles are

The Bible says if your wife is unfaithful, she should be stoned

If you are trusting in anything other than Jesus Christ—church, work, being a good person—you’re trusting in something that doesn’t have the power to get you to heaven.

I wanted to know: Would Jesus ever use a gun?

The pastor thought a moment. “I don’t think so, because as God, he doesn’t need a gun. He can command anything, and it would happen. But all of his followers carried swords for three and a half years, and not one time did he tell them to put those swords down.

There was a simple wooden cross flanked by the words of the First and Second Amendments under which were donation baskets in the form of empty .50 caliber ammunition cans.

“Hell is very real, my friends,” [Bob Gray Senior] reminded us. “There is evil in the world.”

And his son is following the Father’s footsteps, sending a whopping 10.5 million Bible tracts to India. It would be interesting to investigate where these Bible tracts will end up in India. To that end, here is a partial list of Independent Baptist Churches in India.