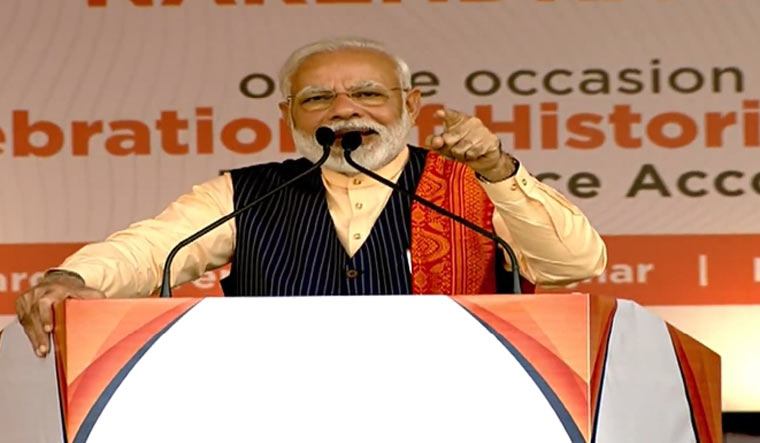 A tryst with peace, destiny and development. A festive atmosphere prevailed in Kokrajhar to celebrate the Bodo accord. The All Bodo Student’s Union (ABSU) and NDFB organised a bike rally and native residents lighted one lakh earthen lamps on Thursday, Feb 6, evening and prayed for overall peace in the region and to welcome the Prime Minister.
On Friday, locals attired in colourful traditional attire danced and celebrated the historic occasion.

Speaking in the massive rally at Kokrajhar, Prime Minister Narendra Modi said -“Today after decades, the road to the development of people and this region has been empowered. I welcome everyone involved in the Bodoland movement to mainstream India”.

Modi’s re-election in May 2019 was billed as a turning point in India’s political history in more ways than one.

A known Modi-bashing section predicted doom – that the country would march towards a near fatal situation for religious minorities including Muslims and Christians and also tribals; but the other said notwithstanding the fear mongering of ‘Hindu majoritarianism’, there would be works for an inclusive India – of course a different and a ‘New India’ as envisioned by Modi himself.
It is in tune with this ‘aspirational India’ that the NDA dispensation has worked for a peace treaty with Bodos – one of the vulnerable communities in far-flung north east – which has often complained of facing discrimination.

The new agreement acknowledges and virtually creates ‘a Bodo homeland’ but without separating it from Assam. Here lies the crux of the puzzle whom we can call a ‘game changer’. “This new pact with Bodos wherein all militant groups belonging to the community has come forward will be seen as a ‘new Model of Development’,” says eminent north east watcher Deepak Dewan.

It is now presumed that this catchword ‘homeland without coming out of the parent and existing states’ would be useful for the centre to reach out to other tribal groups in states like Manipur, to an extent in Nagaland – wherein in Mon-Tuensang region there is already a clamour for a separate Union Territory and also to other ethnic and tribal groups in Assam – like Karbi Anglongs, Dima Hasaos and Cacharis.

It is on this backdrop the visit of Prime Minister Narendra Modi to Kokrajhar – the major township in the demarcated Bodo Territorial Region would gain currency. There are other messages too as Prime Minister is going/visited Assam – first time since the strong spate of anti-CAA protest in Brahmaputra valley region of the state.
Mr Modi’s visit has given a big picture message that it is only in a part of Assam – that the Prime Minister could face a hostile crowd; in rest of the state he still remains a public hero, a performer and a catalyst of development.
In view of the protest in Assam and the cancelled Summit between PM Modi and his Japanese counterpart Shinzo Abe in December, Modi’s visit thus puts a right ‘reset’ for the ruling dispensation. BJP came to power in 2016 after contesting a fierce poll that ultimately resulted in the ouster of the Congress after 15 long years.
Other regional parties of Assam – AGP and AIUDF – had ceded anti-Congress space to the BJP in Barak Valley and Brahmaputra Valley regions in 2016. But the saffron party faces tough competition now in Brahmaputra Valley due to strong anti-CAA sentiment.

Thus for BJP from the point of view of electoral politics, BJP is eyeing 12 seats in Bodo region for itself and possibly for its regional alliance partners. In Bengali-dominated Cachar Valley, which has 15 seats – the saffron party feels it can gain from the Hindu votes even as Bengali Muslims would grudge it with more intensity than it did in the past. The Muslim votes could actually go to AIUDF of Badruddin Ajmal and Modi-Amit Shah duo would not mind that much as long as Congress remains in the periphery.

So rough calculation wise – between Barak Valley and Bodo region – BJP is seeking for itself a big ‘advantage’ vis-a-vis next year’s general elections. The political premium is – notwithstanding the anti-CAA hype, Assam is still not entirely a lost game for the BJP.

But in Kokrajhar-based council, the entire electoral chess board is a bit complex than it could appear on the face value.
The hitherto dominant player is Bodoland People’s Front, which won 11 seats in 2016 assembly polls out of 12. More importantly, it is an alliance partner of the BJP. Notably, Bodoland People’s Front, which had signed a peace deal in 2003, is a popular political force.
But now that the new peace accord has come, there will be several other stakeholders.
All Bodo Students Union is an influential youth-based organisation and if they enter political fray, the BPF-BJP calculus could be disturbed.
Moreover, the ‘peaceable’ comrades and leaders of various erstwhile NDFB groups will also harbour political aspirations. Here too, the calculation in the BJP camp is emergence of more regional parties would again further marginalise Congress.
What has been political masterstroke for the BJP is that the latest round of ‘final settlement’ offers a win-win situation for everyone except Congress.
The game in Assam is not yet over. The Modi government is working hard for peace talks with both the factions of ULFA. While one group is already in peace parleys since the time of UPA regime, fresh feelers have been sent to ULFA (Independent) faction leader Paresh Baruah and if this proposed pact materialises – Assam will be easily inching towards the Lotus party’s lap yet again.
Implementation issue: Taste of the cake is in its eating
But from now – right from the word go as the ‘implementation’ to the peace pacts starts, the Sarbananda Sonowal-led regime has to effectively ensure that there are no bottlenecks and what has been promised in the peace deal actually reaches on ground.
Moreover, there are a few challenges in terms of handling the sentiments of non-Bodos in the region. In terms of census statistics, Bodos constitute only 28-29 per cent of the Bodo Territorial Region’s total population. Thus – Gorkhas, other Adivasi groups, Bengali Muslims and Assamese population also count.
Not many pursuing armed chair expertise and journalism in Delhi may know that the incumbent Lok Sabha MP from Kokrajhar seat Naba Hira Kumar Sarania is actually a non-Bodo. In fact, he is a former ULFA leader and thus when he rake up the issue of non-Bodos importance, it will be erroneous to ignore them.
But in the ultimate analysis, the matured nature of handling things in the form of this latest round of ‘final settlement’ to Bodo issue is a true game changer.
Thus, the accord will easily motivate all the other groups in the rest of Assam and in other states to shun violence and settle for agreement of peace and developments.
In 2014, PM Modi had said for him the eight states of north east would look like ‘Astha Laxmi’ and notwithstanding anti-CAA politics, PM Modi and his party stand to be ‘rewarded’ in terms of electoral successes.

Swati Deb is a New Delhi based writer and journalist.