Geet Ramayana : A musical epic that lives in our hearts 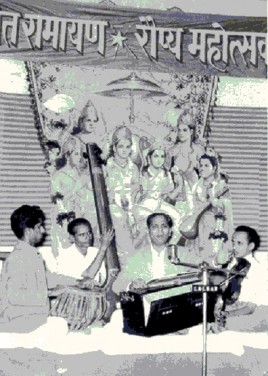 Fifty nine years ago, when an officer of All India Radio (Pune), Sitakant Lad, who was a connoisseur of Indian classical music and Marathi Natyasangeet, conceptualised a weekly programme based on the Ramayana, little did he know that he was not only helping re-create an epic, but was also making it an immortal creation for posterity.

With two geniuses – writer G D Madgulkar (GaDiMa, as he’s known in Marathi) and music composer-singer Sudhir Phadke (Babuji, as he was fondly addressed) roped in for the task, the Geet Ramayana  came into being.

Today, as the next generation of GaDiMa and Babuji take on the onerous task of keeping the Geet Ramayana  alive by staging live shows, bringing out CDs, creating a Facebook page and even launching a mobile app, we take you on a time travel of sorts and tell you why the magic of the Geet Ramayana  lives on – not just in Marathi homes, but also in the hearts of thousands of Indians.

How it all started

The Geet Ramayana  began its epic journey on 1 April 1955 on All India Radio, Pune on the pious occasion of Rama Navami and it went on for a full year. Incidentally, that year was 56 weeks long instead of the usual 52, due to the adhika maasa. GaDiMa initially had written only 52 episodes, but added four more episodes and that’s how we have 56 parts today.

After the super successful AIR programme, Shri Sudhir Phadke spread the magic of this immortal epic through live shows all across India and abroad till 1995. After his death, his son, also a music composer and singer, Shri Shridhar Phadke, took on the task of rendering his father’s creation.

Shridhar recalls how his father and GaDiMa created this epic masterpiece. He says:

In those days the radio was very popular and Shri Lad, the then officer of AIR Pune came up with this idea of making the various stories of Ramayana more accessible to the common man, and what better way than songs to do this. However, it was kept in mind that the epic masterpiece should not in any way dilute the essence of Valmiki’s Ramayana . The writing needed to be excellent and G D Madgulkar was requested to do the same. He also approached my father, who was his friend too, to compose the music.

The rest as they say is history. Dividing the entire epic into 56 parts, and composing it with the heavy influence of the then popular natyasangeet, the Geet Ramayana, as you know it in its current form, was born. Babuji composed all the 56 songs in various Indian classical raagas, which included Bhoop, Malkauns, Chandrakauns, Yaman Kalyan, Puriya Dhanasahree, Pancham Malkauns, Bhim Palas, Desa, Adana, Bhairavi etc. It’s such a rich composition. So, when I try to present the Geet Ramayana a I get this feeling of vilakshan anubhuti – an almost divine and unmatched feeling. This feeling engulfs me when I render those fantastic words which have a fantastic tune. Rarely do the shabd and swar have such mellifluous melange.

Speaking about the highly talented singers who lent their voice, Shridhar Phadke says:

Various singers like Manik Varma, Lalita Phadke, Lata Mangeshkar, Yogini Jogelkar, Vasantrao Deshpande, Suresh Haldankar, Ram Phatak, Appasaheb Inamdar, Gajanrao Watwe and of course Sudhir Phadke himself contributed to this AIR programme and week after week this show occupied the top slot on air. People would light an agarbatti and keep flowers near the radio when the programme began. I have never seen or heard people being so immersed in divinity.

The songs that are featured have been composed on the Bala Kanda, Ayodhya Kanda, Aranya Kanda, Kishkindha Kanda, Sundara Kanda, Yuddha Kanda and Uttara Kanda.

When Veer Savarkar and Vinoba Bhave got misty-eyed

Shridhar Phadke and Sumitr Madgulkar (GaDiMa’s grandson) have many tales to tell of the Geet Ramayana, some etched in memory forever. Shridhar Phadke narrates one such incident.

At the height of the Geet Ramayana ’s popularity (around 1960) there was a show titled Mrityunjay Din -held especially for Veer Savarkar. There Babuji presented one of Savarkar ’s very popular and poignant poem Sagara Pran Talamala La during the programme. After it ended, Veer Savarkar  walked up to Babuji and said, “You beautifully rendered one of my poems today, but when will I hear you Geet Ramayana ?” To this Babuji promised that at the next given occasion he would invite him.

Sometime later, there was a function held in honour of Shri Ganpatrao Nalavade in Shivaji Mandir in Pune, where Babuji was to present a few Geet Ramayana  songs. As promised, Babuji, who was deeply inspired by Veer Savarkar , invited Veer Savarkar  and requested him to sit in the front row of the audience. The show began and everyone, including Savarkar  was totally involved in the show. Seeing him in the audience made that day very special for Babuji. Every word that he sang was immersed in a rare kind of emotion. When he started singing दैवजात दुःखे भरता दोष ना कुणाचा पराधीन आहे जगती पुत्र मानवाचा the audience got emotionally charged. As he completed this 6th verse and started singing these lines

the stoic Savarkar ’s expression changed. He was choked with emotion and his eyes glistened ever so lightly with tears. The stoic patriot we all knew showed a side that we had rarely seen. After this show he hugged Babuji and that’s when Babuji felt his musical journey has been every bit worth it. Babuji felt that the lines in the antra were probably the thoughts that were running in Veer Savarkar ’s mind at the time he got emotional. A great freedom fighter like him, who had done so much for the nation was ignored in the later years of his life and the power of the beautiful, moving words of Geet Ramayana had touched his heart!

Sumitr Madgulkar narrates the other incident.

It happened in 1958 in Pandharpur, during the Sarvoday Sammelan and Babuji decided to have a show especially for Vinoba Bhave. It was the early hours of the morning and towards the end the last song गा बाळांनो श्रीरामायण  in Raag Bhairavi began. The following lines are in the antra:

Probably only a saint like Vinoba Bhave could understand these lines which spoke of renunciation of material pleasures and it touched a chord. Tears flowed down his cheeks and he was inconsolable for a while. GaDiMa too could not keep his emotions in check. It was at that time that Vinoba Bhave explained the intricacies of the Tulsi Ramayana  and Valmiki Ramayana  to GaDiMa. The same night in a Dak Bungalow a special show of the Geet Ramayana  was also held for President Rajendra Prasad.

An epic for all ages

While the AIR programme lasted for a year, the shows of Geet Ramayana  continued for years after, not aging even a bit in their appeal or popularity. The shows used to run to packed houses when they began, and even now, as recently as a few months back in Chinchwad, it saw more than 2000 people attend. So, what’s the alluring quality of the show?

There are so many characters in the Ramayana  and I think it was Babuji’s special talent that when he sang the verses, he ensured that each character was endowed with a special touch. So, the portion when the story is about Rama the rendition is different, while that of Sita is again different. For Shurpanakha’s character, Babuji’s voice takes on a totally different hue. While Babuji always felt that all singers gave full justice to the characters in the original AIR recording and appreciated them, singer Yogini Joglekar, who sang for Shurpanakha was remarkable. सूड घे त्याचा लंका पति was one such line that brought out the emotion so well.

When Bharata sings, Babuji’s voice sounds different too. All this is so difficult to do, but my father managed superbly. While Babuji’s voice touched a chord, GaDiMa’s writing was spot on. Bringing out virtues, moral dilemmas, even fallibility is so difficult, but GaDiMa did it with such élan and more importantly without tampering or re-interpreting with the original Ramayana  in any way. No wonder he was called the Adhunik Valmiki!

In any Marathi household – right from a kid to an adult, these lines have been heard ever so often. Now, with the Geet Ramayana being translated into Sanskrit, Bengali, English, Gujarati, Hindi, Kannada, Konkani, Sindhi, Telugu and even in Braille, the makers hope that the message of Valmiki’s epic spreads far and wide.

Sumitr Madgulkar, who has made a website on his grandfather http://www.gadima.com/ says:

The beauty of Ramayana  is that it is timeless. It is for every generation and every age. So I thought, today’s generation needs something that they feel comfortable with. So, I started a Facebook page https://www.facebook.com/egeetRamayana  and now have launched a mobile app that makes the Geet Ramayana  accessible to all the youngsters.

However, Shridhar Phadke probably sums it up it best when he says,

Ramayana  is about values, in fact it’s all about life itself and it is the very reason the common man connects with the story and with the Geet Ramayana . So whether it’s Chinchwad, Nagpur, Indore, or Mumbai or Pune or Kolhapur or even foreign shores, the power of the Ramayana  is such it draws people in. Of course, Babuji’s rendition and GaDiMa’s lyrics have added an extra layer of richness to the already rich text. It is because of this that I know in whatever form, the Geet Ramayana  is here to stay and touch the lives of the people.