Ghulam Ali Or The Politics of Ghazal 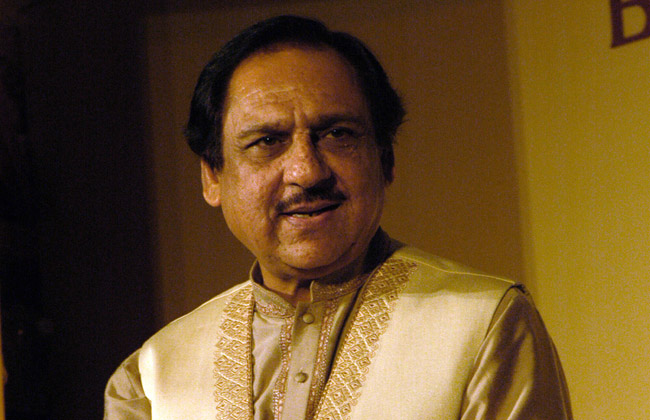 It is extremely sad that ordinary Pakistanis who want to visit the Khwaja Gharib Nawaz shrine in Ajmer or attend a literary festival in Jaipur are routinely denied visa by the intellectually bankrupt Indian diplomats, but Pakistani ghazal singer Ghulam Ali is given long-term and multi-city visa by the Modi government to serenade us with the high-voltage politics of ghazal.

Ghulam Ali has held concerts in Kolkata on 12 January, in Thiruvananthapuram on 15 January and in Kozhikode on 17 January – and in Lucknow last year.

In each of the three cities, the audiences were either politicians who were prominent on stage or those common masses who do not speak Urdu in their daily life. In fact, the way Mamata Banerjee uttered her Urdu sentences in felicitating Ghulam Ali at the concert in Kolkata, Urdu language died a thousand deaths and ghazal was murdered a million times. If Ghalib were on Twitter, he would be ROFLing – rolling on the floor laughing – on the state of Urdu poetry in India.

This article is not about Ghulam Ali, or the merit of his singing; it is about the phenomenology of Ghulam Ali.

The argument is not that Ghulam Ali should not be invited to enrich India’s literary life. Kozhikode has a tradition of inviting ghazal singers, says journalist Ullekh NP. However, it can be seen that the timing of Ghulam Ali’s concerts and official invitations from the state governments in Uttar Pradesh, West Bengal and Kerala are meant to serve the electoral prospects of the ruling parties in these states.

The argument therefore is about the politics of ghazal and the behaviour of Indian politicians. Ghulam Ali, whose concerts in Mumbai and Pune were cancelled due to opposition from Shiv Sena last year for political reasons, would grasp this fact that ghazal is the politics of India and he is a political tool, at least in the ensuing election season.

After the concert in Kolkata, Ghulam Ali dubbed Mamata Banerjee as Saraswati, the Hindu goddess of wisdom and music, stating: “I am grateful to her. She has done us a favour in the form of Saraswati.”

Opportunism has its own tongue, but it will be hard for Indians to agree with his statement, especially at a time Miss Banerjee is being seen in open support of Islamists in West Bengal. Urdu has transformed into an official language in Pakistan and a language of opportunism in India; to cross-check, find out how appointments are made in Urdu departments of Indian universities.

For a vast number of people in South Asia, Urdu is a language of their backwardness, bereft of new thinking. If you study Urdu, there are no chances that you would become a space scientist, a chartered accountant or an airlines pilot.

Urdu has been political. It was a language of rebellion during the freedom struggle but after the Partition of 1947, it became the official language of the Pakistani state and is an instrument of cultural and political subjugation in the lives of Pashtuns, Balochs and Sindhis now.

Ghulam Ali will not get the mass adulation in Balochistan, Khyber Pakhtunkhwa or Sindh that he gets in India. Having lost its rebelliousness in Pakistan, Urdu serves the ideology of the ruling Punjabi elite of Pakistan and acts as their extension in India.

It is now coming back as a type of domestic politics in India and intervenes in our national discourse. And politicians like Mamata Banerjee, Arvind Kejriwal, Akhilesh Yadav, Oommen Chandy and MA Baby – all of them of the secular-communist alliance – grasp that Ghulam Ali could deliver them Muslim votes. Being Ghulam Ali is not merely about singing or ghazals; it is about politics. State assembly elections are due in Uttar Pradesh, West Bengal and Kerala.

Ghulam Ali is politics. Ghazal is no longer ghazal. It treats Indian Muslims as captive audiences and mobilizes them into a communal electorate to serve the Left-of-the-Centre political parties.

The sponsors of Ghulam Ali’s concerts convey to Indian Muslims that Urdu is their heritage, even though they do not speak Urdu, at least in West Bengal and Kerala. We are seeing emergence of state-sponsored ghazal as a counter-patriotic force; the sponsors of such concerts view Indian Muslims as a counter-patriotic forces; these politicians will not host Indian ghazal singers.

So, Ghulam Ali has emerged as a tool of Indian politics. Ghazal has emerged as the ideology of ‘secularism’ – which is best described as sickularism, a form of bogus liberalism and political correctness rolled into one.

Indian politicians, wedded to electoral opportunism, will not acknowledge this, but when ghazal is emerging as a form of electoral politics, India’s youths must remain aware that ghazal is indeed politics – and artists are not immune from politics.