Girish Karnad gets a dose of his own medicine 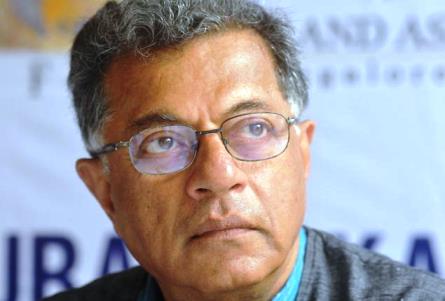 Note: The following is a translation of the front page story run by the Kannada daily, Vijaya Vani. The original report can be accessed here. What is noteworthy is that none of the English newspapers carried this news report.

Is it possible that Jnanapith Award winner Girish Karnad could be a terrorist? And a result of his being a terrorist, is it ok to assassinate him? Tcha! Something like this is beyond one’s imagination. However, Karnad is assassinated because he is an intellectual terrorist. His plays are dubbed bullshit and then torn into pieces and flung in all directions.

Guess where this rarest of rare incident occurred? It occurred in his own backyard, in Rangashankara, a theatre whose concept and construction was undertaken under his supervision. What’s more, it occurred as part of a week long drama fest dedicated to performing Karnad’s own plays. It occurred towards the end, when the closing scene of Karnad-composed Dreams of Tipu Sultan was being enacted.

We can recall an incident that occurred in last year’s Jaipur Literary Festival. Girish Karnad had dubbed Rabindranath Tagore as a “third-rated playwright.” This had resulted in nationwide furore and controversy. And so, in order to give Karnad a taste of his own medicine, Pondicherry based drama director  Kumaran Valavan created a new scene using Karnad’s own play.

What occurred on the stage?

The theatre fest featured eight plays of Girish Karnad, selected scenes from plays in which he himself had acted,  and exhibited Kaadu, the film he had directed. A two day seminar about his plays was also held.

As part of this, on 23 October, Pondicherry-based theatre group, Indianostrum enacted Karnad’s Dreams of Tipu Sultan. The final 15 minutes of this play, which was staged at 3:30 P.M carried this surprise. Even as the audience was watching, a terrorist appeared on the stage and began talking anti-national stuff. This left the audience confused because this scene was not part of Karnad’s play. Even as the audience was left grappling with this, the terrorist is killed on the stage. Next, as the cloth comes off the terrorist’s dead body and his identity revealed, a dialogue is heard, “he is not a terrorist, he is Girish Karnad!” Almost immediately, another raucous dialogue is heard, “Karnad is dead!” This is followed by an exclamation, “what’s this stink…” Hands run over the dead body and pieces of paper are discovered. Another dialogue: “this is all bullshit!” and the pieces of paper are torn and thrown away.

After this scene, a few members of the audience climbed the stage and protested. Arundhati Nag, who’s in charge of Rangashankara intervened and said, “there’s no censorship with respect to any play. If you have any issues, please see the director of this play during the 7:30 show.” Despite this, other members of the audience approached director  Kumaran Valavan and insisted him to chop off this scene in the 7:30 show. The protesters agreed to this.

The 7:30 P.M. show witnessed record crowds. However, the terrorist scene was repeated in this show, too. Protests erupted again. Director  Kumaran Valavan who appeared on the stage said, “It was Karnad who inaugurated the tradition of criticizing the playwright on the stage. The terrorist on the stage is merely symbolic. We have simply used Karnad’s thoughts as a symbol.” However, the controversy and debate continued even after Valaven’s justification.