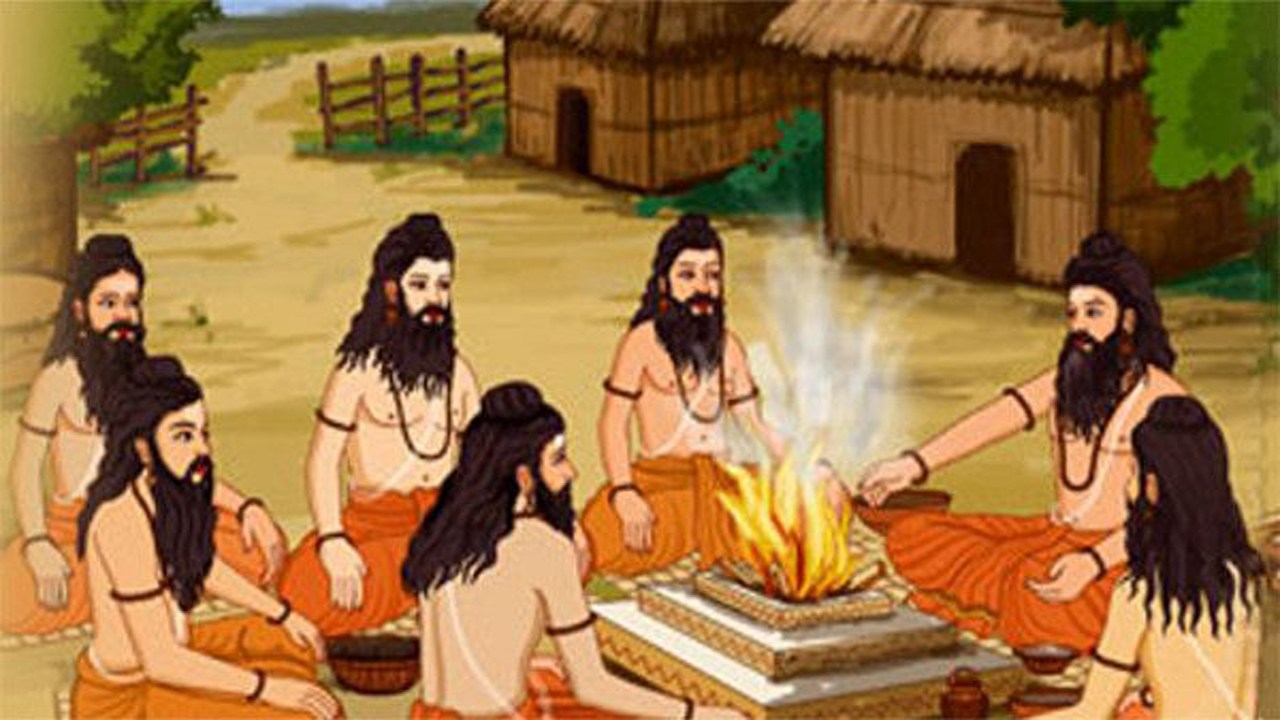 In this very land were born numerous great souls – realized souls – who had direct perception of the Supreme Being – the parabrahman. These souls had complete knowledge of the truth of the world and were detached from the material bindings of samsara – the cycle of birth and death. These souls are what we collectively refer to as ‘Rishis’. Although the root of the word Rishi indicates ‘gati’ or movement, its primary meaning is knowledge. It indicates knowledge of the shastras, satya or truth and tapas or austerity. Therefore, those souls who had great knowledge, were wedded to truth and always engaged themselves in austerities came to be known as Rishis.

The Vishnu Purana declares the greatness of Rishis thus

The Rishis had, in their hearts, that parabrahman who has been described by the Vedas!

The shastras declare parabrahman as the one who is infinite in an infinite number of ways. He is ananta in every guNa – auspicious attribute – that we can think of. Naturally, it is impossible for anyone to realize – or have full knowledge of – any entity that is infinite. Still, different souls have varying knowledge of this parabrahman, subject to the extent of their intrinsic ability – swaroopa. This ability to know brahman is highest amongst the Rishis.

Within the category of Rishis also, there is a gradation based on their level of realization. Thus we have Rishis, Rajarshis, Devarshis, Maharshis and Brahmarshi. In the Bala Kanda of the Valimiki Ramayana, there is a description of how Sage Vishwamitra performs repeated cycles of tapas to progressively attain each of these positions and finally ends up becoming a Brahmarshi.

Based on the area of their excellence or fame, there are again a few categories into which Rishis are classified. When Chaturmukha Brahma (the four headed devata – different from parabrahma the Supreme Being) started his process of creation, ten Rishis emerged from his mind – the manas – and these ten were naturally endowed with the divine knowledge of parabrahman. These ten Rishis – Bhrigu, Marichi, Atri, Angirasa, Pulaha, Kratu, Manu, Daksha, Vasishta and Pulastya – came to be known as manasa-putras.

As briefly mentioned earlier, those who attain the highest level of knowledge of parabrahman – amongst the Rishis – are known as Brahmarshis. Seven of them are very well known – Bhrigu, Angirasa, Atri, Vishwamitra, Kashyapa, Vasishta and Shandilya.

Thus we find a variety of parameters based on which the ancient Rishis were identified and classified.

(Note: The above list of Rishis, under each category, is obviously not exhaustive)

Origins of the Gotra-pravartaka Rishis

The Rishis are also the pravarkatas – the propagators – of various vamshas, the lineages. It is believed that all lineages in the Bharata Bhumi have originally their roots in one of the Rishi paramparas. The lineages are identified by two main attributes – the Gotra and the Pravara. The Gotra indicates the chief clan to which an individual belongs. Further within a Gotra, there exists many ‘Pravaras’ or ‘sub-lineages’. Both the Gotra and Pravara are identified with Rishis who were part of the lineage.

The Gotra is always identified by the name of a single Rishi (mostly) while the Pravara can have a number of Rishis associated with it – up to even seven. Just to illustrate, the author of this post belongs to the ‘Kashyapa’ Gotra – the clan of the Sage Kashyapa – and further belongs to a ‘Tryarsheya’ Pravara – or a Pravara containing the names of three Rishis – the same being Kashyapa-Avatsara-Naidhruvi.

Even today, in many traditional families, the custom of offering salutations to an elder by distinctly stating ones Gotra and Pravara is prevalent. This is termed as ‘Gotrabhivandana’.

There are a number of Rishis who are propagators of Gotra – Gotra-pravartakas. We shall get to the details of these Rishis a little later. However, there are primarily seven chief Rishis – Saptarshis – who are considered as the root for even the Gotra-pravartaka Rishis. In other words, even the Gotra-pravartaka Rishis came from the lineages of these seven Rishis. The names of these seven – Bhrigu, Angirasa, Kashyapa, Atri, Vasishta, Agastya and Vishwamitra – are slightly different from the Saptarshis quoted earlier in the post.

The Matsya Purana provides an interesting insight into the origins of these seven Rishis and how they became the Gotra-pravartaka Rishis.

The longevity of an individual Brahma is 100 years, after which he attains Moksha. Each of the 100 years consists of 360 days and nights. Every single day (and similary every night) in the life of the Chaturmukha Brahma consists of 14 manvantaras. Each manvantara, as measured by our time standards, is equal to 306,720,000 human years. Presently, in the life of the current Chaturmukha Brahma, 6 manvantaras have already passed, and the seventh manvantara is underway. The name of the present manvantara is ‘Vaivaswata’ – so named after the ‘Manu’ or the leader of the current time period. The first of the manvantaras was similarly named after the then Manu – Swayambhu.

Chaturmukha Brahma had created the various life forms during the Swayambhuva manvantara. This included the various Rishis – the Saptarshis being the chief among them. However, it so happened that Lord Shiva once cursed the Rishis to lose their tapasya. The Rishis were greatly depressed by this and they sacrificed their lives, choosing to not live a life without knowledge of the parabrahman.

In the Vaivasvata manvantara, Chaturmukha Brahma decided that it was time to bring back the various Rishis to ensure the propagation of jnana and dharma happened without any hindrance. To facilitate this, he underwent a ‘retas-skhalana’. The veerya thus produced by Brahma was offered, by himself, into a great sacrifice! From the sacrifice, numerous Rishis took birth one after the other.

From the base of the sacrifice, Rishi Bhrigu made his appearance. From the heated coals, Rishi Angirasa was born. Rishi Atri was born from the flames of the fire. From the rays of the fire emerged the resplendent Rishi Marichi. From the hair of Brahma, Rishi Kapisha and Pulastya were born. From his long locks, Rishi Pulaha was born. Right from the middle of the sacrificial fire, Rishi Vasishta appeared. Rishi Kashyapa and Agastya also came out of the sacrificial fire like the others. Numerous other Rishis were also given birth by Brahma in this fashion.

These Rishis got married and subsequently gave rise to numerous other Maharshis. Thus the various lineages started to grow at the onset of Vaivasvata manvantara.

All the Gotra-pravartaka Rishis are categorized under seven primary Rishis. These seven – Bhrigu, Angirasa, Atri, Kashyapa, Vasishta, Agastya and Vishwamitra – were all Brahmarshis occupying the highest echelons amongst the hierarchy of the Rishis.

From these seven Rishis, there arose 18 chief groups – gaNas – to which all the Gotra causing Rishis belonged. In other words, every Rishi who has propagated a Gotra belongs to one of these 18 gaNas.

The classification of the 7 Brahmarshi families into 18 gaNas is as follows.

Brahmarshis and the Gotra Ganas

Each of the 18 gaNas listed above have under them a number of ‘Gotra Rishis’. Thus, from 18, we get many tens of Gotras, the descendants of whom are amongst us even today. Further under each Gotra, numerous Rishis and Rishi-kumaras were born. Based on the tradition in the particular Gotra, a number of ‘Pravaras’ or sub-lineages became prevalent.

Thus, each gaNa has several Gotras, each of which further has one or more Pravaras. The Pravaras are classified based on the number of Rishis who are remembered in the lineage.

Grutsamada and Shaunaka are the well-known Gotras under this gaNa.

The Pravara common under this gaNa is

Vadhrashwa and Mitrayu are the famous Gotras under this gaNa

The common Pravara belonging to this gaNa is

Vainya and Partha are the most famous Gotra Rishis under this Gana.

The Pravara most often found under this gaNa is

The above are the gaNas coming under Brahmarshi Bhrigu.

The commonly occurring Pravaras under this gaNa are

Ajamidha, Ghora and Kanva are the main Gotras under this gaNa.

Each of the five Gotras have ekarsheya Pravaras. Hence the Pravaras are also as the Gotra names above.

The two main Pravaras under this gaNa are

The following are the Rishis belonging to the gaNa coming under Brahmarshi Atri.

The well-known Pravaras under this gaNa are

Some of the main Pravaras under this gaNa are

Thus are the details of all the 18 gaNas of Rishis who are the ancestors of all our lineages.

Even today, in Sanatana Dharma, the Gotras and Pravaras are an important factor in deciding whether two families will proceed with a marriage proposal. Sa-gotra (within the same Gotra) and especially sa-Pravara (same gotra and also same Pravara) marriages are strictly avoided by traditional families.

Thus amongst the 7 generations thus described, if there is any common pinda-pradaatru (pinda-giver) on either side, then the relationship will end up becoming a sapinda relation.

Gotras for the unknown

Apart from the above detailed Rishis and Gotras thereof there are many Gotras which have originated from many Kshatriyas. These are not covered in this post. One may get to know the same from family sources.

For those who do not know their Gotras, either because the family lost knowledge of the same, or if a person became an orphan in childhood – the Gotra and Pravara of the family purohita becomes their Gotra.

Another solution given in the shastras is to accept the Kashyapa Gotra since the Shrutis declare Kashyapa as the forefather of all humanity.