The Great Night of Lord Shiva 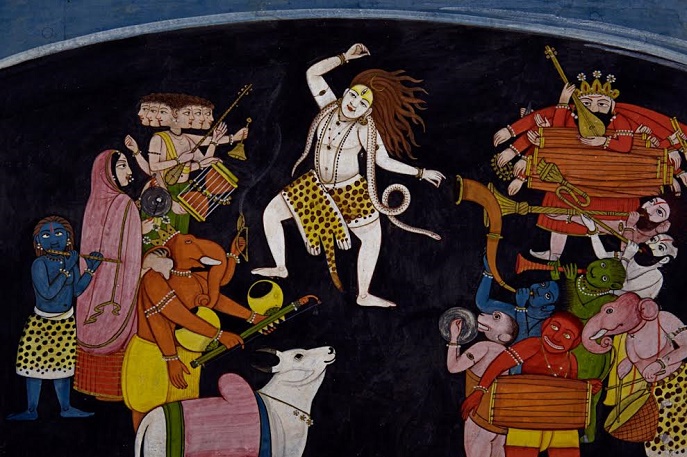 Shivaratri is unambiguously the most prominent and significant of spiritual festivals for all who worship Shiva and Shakti. Every year on the 14th tithi during the Krshna Paksha of the month of Magha or the month of Phalguna, depending on the calendar being used, this festival is celebrated by millions of Hindus across India. Many Hindu scriptures of the medieval era speak of this Mahashivaratri (Maha because every month too has a small Shiva ratri), its associated stories and the methods of celebrating this night. According to some legends this is the night when Shiva performs his fantastic dance of Tandava, while another story explaining the significance of Shivaratri says this was the night when Shiva was married to Parvati.

The simplest form of Shivaratri celebration involves fasting all night along with contemplation on the magnificent tranquility of Lord Shiva and abhisekha of Shiva Linga using water, milk, bel leaves, dhatura, honey, curd, ghee, bhasma, etc. as the night keeps progressing. Offering each of these items is supposed to bring a specific result to the devotees. During each prahara (the night is divided into 4 such praharas) there are specific mantras used for worship and abhisekha of Shiva. When such extensive worship is not possible, some devotees use the hour of midnight as the focal period of Shiva puja. But even otherwise, merely staying awake and keeping a strict all-night vigil during Shiva Ratri is an upasana in itself. It is believed that Lord Shiva comes to all individuals in some or other form even if for a very brief moment, who remains awake during this great night. The Linga Purana states the story of how this aniconic symbol of the great Lord appeared before Vishnu and Brahma when the two were competing among themselves over supremacy. Shiva is probably one of the few deities, or maybe even the only deity, who is equally popular among both Vedic and Tantric sampradayas.

Different people and different sampradayas look at Shiva differently. The Adwaita Vedanta tradition sees him as the best representative of the Brahman or Universal Self. Those on the path of Yoga also revere Lord Shiva as the Lord of Yoga, particularly those involved in hathayogic and other pranayama or asana based practices. Indeed Shiva is the deity who was worshiped by the legendary author of the Yogasutras. Not to be left far behind, the Tantrics consider no worship of Shakti to be complete without a consummate sadhana of Shiva. In temples like Pasupatinath, therefore, animal sacrifice is also offered to the Lord, while Jyotirlinga in Ujjain allows abhisekha of the Linga using bhasma or ash from cremation grounds.

Every deity in Hinduism has a form, which represents the qualities embodied by him or her. Shiva’s most popular iconography is that of Yogi in deep meditation, wearing negligible clothes (digambara), sitting immersed in samadhi on the snowy peaks of the Himalayas. His body is smeared in ashes, and he wears a poisonous snake as a garland, while riding a bull as his vahana. Clearly the first impression is that of an expert Yogi, a renunciate who is verily the Lord of penance. Probably no being, including the gods, is capable of as much Tapasya as Shiva is, and it is this power of his impossible penance, which makes him immune to the severe cold of the Himalayas, which tames the dreaded Vasuki Naga, and which makes him the perfect host for all such dreadful rejects of formal society – bhutas, pretas, ganas, pramathas, etc., who worship and admire him as their Lord. Ashes are the best representative of a substratum that is left when everything that can be changed has been changed. Fire’s primary quality is to change things from one state to another and in that sense – there are other symbolisms too for fire – it is like our daily reality, where change is the only constant. But Shiva is the center around which all change occurs. He is the eye of the tornado, which remains still, unmoving, unaffected by anything. So when everything has been burned down in the fire of change, all that is finally left are the ashes. That is the bhasma Shiva applies on his body, when he is in samadhi, which is normal state. But, of course, his samadhi is unlike human Samadhi. Human Samadhi involves fixing a single pointed concentration on an object while excluding all other sensory inputs. Shiva, on the other hand, remains in samadhi while, so yogis say, being completely aware of everything in the Universe. Yet another epithet used to describe him is Bholenath – the Lord of innocence. He is innocent because it is not in his nature to calculate. If one is able to awaken Shiva by his devotion or penance or sadhana, then there is almost nothing that Shiva will not grant. He is the infinite reservoir of all Shakti in the Universe for whatever purpose it may be used. Asuras have used this knowledge to perform furious penances and gain boons from Shiva that allowed them temporary ascendancy over the devas. This is also because Shiva is the god, who remains generally uninvolved with the working of the world, he is the closest formulation of all that is transcendental to the human consciousness. He is a god onto everyone and everything – hence the epithet devadideva Mahadeva. Even during the Mahabharata era, we find Shiva as the one who is addressed with maximum reverence by all parties in the conflict. Krshna himself had worshiped Shiva and Shakti for a certain period of time, and some believe that is was Krshna, who gave the 1000 names of Shiva to one of the Pandava brothers.

Shiva rides the devotee bull, vrishava, named Nandi. Symbolically Nandi – which can mean Shiva’s doorkeeper as well as the happy one – is the transformed state of a seeker, who is always immersed in devotion towards the Lord and answers to no lower ambition other than the Divine Himself. Indeed Nandi is the truest of all Shiva bhaktas for his bhakti is ahetuka, causeless. There is nothing he wants for himself, but always looks up to Shiva. Looked at from a different perspective, when a person affects certain fundamental changes in his inner being, when Shakti opens up the knot in the heart and the inner being governs all his activities instead of the ego, he becomes a vehicle of Shiva.

All this however is not to suggest that the form of Shiva and Nandi has no external existence or is merely the subjective imagination of a seeker. Far from it. They exist as individualized form of god, who can be experienced externally as an independent deity, if one advances to that state, or even internally as reflecting of certain qualities which are bound to manifest when a seeker approaches closer to the deity.

Shiva in Tantra, and Yoga

Shiva plays a cardinal role in the Tantra shastras both through scriptures as well as practically. Being more inclined towards this marga, the author can vouch for the efficacy and high regard in which Shaktas consider Shiva. He is Pashupati – Lord of animals or all animal tendencies in man. He is Aghora, non-terrifying, and he is Bhairava the dreadful. It is believed that Shiva in his form as Bhairava revealed the Tantra Shastras to Parvati for the greater benefit of sadhakas in this Kali Yuga. Any ritual in a heterodox setting like a cremation ground, or in forests, near crossroads, in places infested by spirits or other ethereal beings cannot start without the blessings of Bhairava. He is both the protector as Vatuka, the small child who manifested to save Shakta’s rituals from various troublemakers, and the Lord and sovereign of all that is fit to reside in a cremation ground. For he is the one who is undisturbed, unshakeable, akshobhya. This one quality makes him the controller of all Shakti, whether it be a Shakti that works within the bounds of society or one that stands outside of society in psychologically stressful zones like cremation grounds.

There are rituals and sadhanas in the Tantra marga, which can only be performed on this great night of Shiva. Legend has it that the great Kaulacharya Siddha Matsyendra used to perform a special Tantric abhisekha on the Pashupatinath Linga at midnight on Shivaratri. It was during one such ritual that Shiva appeared to him and directed him to search for a young boy, who would later go onto become the exceptional Mahayogi Goraksha. Certain class of higher level of siddhis in Tantra are possible only during the night of Shivaratri. The Lord is also Nageshwara. Sadhanas related to Nagas, which is rare today, but not impossible, also become easier on the night of Shiva ratri. The canonical Shakta text Devi Mahatyam describes Shivaratri as Maharatri – great night – and one of 4 cardinal times when sadhana is particularly fruitful.

So depending on one’s inclination and path there are many different ways in which devotees and sadhakas can take the benefit of Shivaratri. From Vaidika Rudrabhisekha to Tantrika methods to meditation and contemplation on scriptures to hatha-yogic or Rajayogic practices, or even a simple gesture of fasting and keeping vigil all night can go a long way in accelerating our spiritual progress.

May Shiva impart on us a fraction of his legendary equanimity!