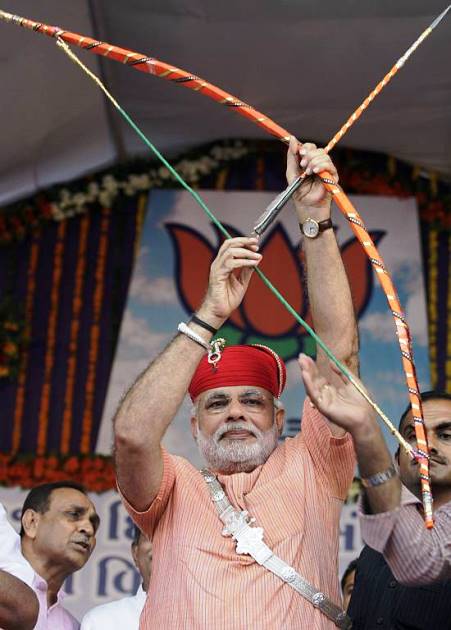 Note: This was sent in by Shwetank, a well-wisher and supporter of IndiaFacts. Shwetank is a Chartered Accountant and a keen political observer.

Narendra Modi began his campaign for the 2014 general elections in Uttar Pradesh and its neighboring state, Bihar. This will take Modi’s quest for the Prime Minister’s job arguably to its most crucial battlegrounds. UP and Bihar are going to see multi-cornered battles in 2014. Together, these states account for 120 seats, which translate to 22 per cent of the total Lok Sabha tally.

Overall Mood in the country

Over the past two years at least, the demand for change is loud and glaring, and the demand spans the entire nation. Equally, it is clear that Narendra Modi fits the bill as both the leader and deliverer of this change. There are essentially two main challenges that stand in Modi’s path: a weak BJP in South India and the electoral complexities of UP and Bihar.

Even giving credence to the thinking in some circles that an overtly pro-Hindu sloganeering can spoil the mood for change, especially among the floating voters in UP and Bihar, the powerful anti-incumbency mood and the overwhelming anger against the nine-year long disastrous UPA rule will be enough to defeat the Congress. On the other hand the Congress party is desperately trying to clutch at the straws by announcing crazy sops. However, all this won’t help them much in this election.

Amit Shah’s role in UP is likely to make or decimate the political fortunes of his boss, Narendra Modi, the BJP’s Prime Ministerial candidate. Already, Shah’s kind of politics is being blamed for the recent riots in Muzaffarnagar but he is unruffled. Currently the BJP has 10 seats in UP, but if it gets 20 seats or less in 2014, Modi is unlikely to become prime minister. Just as Andhra Pradesh strengthened the Congress’s claims to power in the 2004, and later in the 2009 elections, UP will play a similar role in defining Modi’s (and the BJP’s) destiny. Currently, while Modi, in rally after rally, is selling the dream of development, Shah is mobilizing the RSS/BJP cadre to bring Modi-sympathizers to the booths.

The trend is towards total change. There is tremendous anti-incumbency against the Samajwadi Party, and anger against both SP and BSP for supporting the corrupt rule of the UPA at the Centre. Moreover, the BSP has lost the election recently, and people have fresh memories of their rule. At the moment, the Congress is the prime culprit in the eyes of the voters. The general trend in UP from 1967 to 2013 has been that people have veered in one direction to bring about change and vote out a government. It is likely to be the same in 2014

Here are the caste Matrix and the statistics for the state:

As is evident from the data, Muslims and OBCs are key segments. With the recent riots in Muzaffarnagar, SP was hoping to benefit if the Muslim votes got polarized. Unfortunately for them, it seems that the plan has backfired in both the state and centre. This is especially true in western UP, where the BSP can make some gains and add to their core Dalit votes. Mulayam Singh will still be able to hold a bigger chunk in the other regions of UP, but their overall vote share will decline with withering OBC votes.

BJP’s success will depend on how smartly it plays up the backward caste and the humble origins of Modi, and at the same time manages to hold on to the upper caste votes. In a quadrangular fight in UP, a small vote difference can lead to a dramatic shift in seats. Multi-polarity will help the cause of the BJP as there is a new generation, which is fed up with the gross misrule of India under the watch of the Congress-led UPA Government. This new-generation voters could potentially cut across all caste lines, and decide the fortunes of BJP, both in UP and Bihar.

A small shift in the aforementioned groups may lead to a dramatic shift in the number of BJP seats, which could rise from its current tally of 10 to 60. If the expected shift does not happen, the seats will remain at around 20 to 22, and that would be a dead end for the party and Modi.

In Bihar, there is a triangular fight. The Congress has dumped Lalu. Currently, the JD(U) is its most favoured (and natural) ally, and Nitish too, has given enough indications to embrace it. What is unclear is the stand of Ram Vilas Paswan. BJP’s principal challenge will be Nitish Kumar, with the Congress as the junior partner. Even if a Congress-JD(U) tie up is not announced before the elections, it is pretty evident that they will join hands to defeat Modi by all means. This will probably result in Muslim voters backing the Nitish-Congress alliance, thereby reducing RJD largely to its Yadav base plus the ever loyal Muslim vote bank too. Hence, there is always a chance that an angry Lalu could play spoiler.

Here is a breakup of the core voter base of each party:

Nearly 80% of the Muslim population in Bihar is primarily concentrated in 10 constituencies, and account for a huge range of the vote share: between 18 to 70 %. As a result, they have a major impact in those areas.

The game plan in Bihar is to tailor this group’s political positioning into the caste matrix. For example, about 40 of the BJP’s current 91 legislators in the state are either OBCs or Mahadalits. According to state BJP leader Sushil Modi, the party will use its OBC leaders, notably Narendra Modi, to take on the JD (U) in its stronghold—that is, the backward caste. Nitish Kumar would possibly counter this by suggesting that while Narendra Modi rose from a humble background, he is now closer to corporates than to backward classes. He would also use the secular versus communal card.

If the BJP focuses on Modi’s popularity and his background of being a ‘Garib Chaiwaala’ from a backward class, it might attract the Mahadalits and backwards who are currently vacillating between Lalu, Nitish and possibly Paswan.

Various pre-poll surveys indicated leads for the BJP even before Modi had begun his campaign and held rallies in the two critical states. There is a great deal of curiosity about him, and he has galvanized the youth looking for hope. His grip on BJP supporters is unchallenged. The turnout at Narendra Modi’s first rally in UP (Kanpur) speaks volumes about his appeal. We saw another glimpse of that at his first ever historical rally in Bihar. The number of people who attended the rally was truly gargantuan, spilling over the Gandhi Maidan and beyond. All roads connecting to it were choked, akin to a human river. People who were seen in the rally were mostly backward and Mahadalit youth. The hope and courage in their eyes were evident. The Modi wave in Bihar is at the level of frenzy. The bomb blasts in the rally and the incidents after that have reduced Nitish Kumar’s standing in the eyes of people of Bihar.

If the prevailing conditions continue, Modi can win a sizeable chunk of votes based on his personality, his background and people’s rising expectations. Most of the opinion polls are projecting that the BJP will get maximum number of seats in Bihar but all are shying from giving BJP a clear majority. However, in my understanding, the BJP should get nearly three fourths of the total seats or more which translate to 30 plus seats.