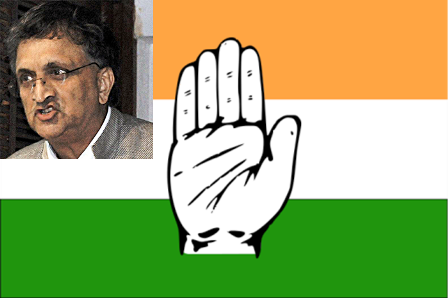 In the first written in the Times of India on 13 November 2013, he says the following:

…I argued that India needed a BJP sans the RSS and a Congress without dynastic politics. A right-of-centre party devoid of religious prejudice and a left-of-centre party not beholden to a single clan… [Emphasis added]

In the second piece written (requires subscription) in the Financial Times on 17 November 2013, Guha claims that:

Next May, the country goes to the polls for its 16th general election. In power, since 2004, is a coalition led by the centrist Congress party…[Emphasis added]

If we look at the history of this party, it began as the Indian National Congress whose avowed aim was to liberate India from British rule. Post Independence, the Congress party went through a series of changes, chief of which was the splitting of the party by Indira Gandhi. Other important changes that accelerated under her leadership was the open cultivation of vote banks–primarily, the Muslim vote bank.

After ruling the country for more than five decades, the Congress today is perceived as a party bereft of any definition or ideology, and that any talk of ideology from the party’s quarters is not reflected in practice.

However, in the economic sphere, the Congress since the days of Jawaharlal Nehru’s Prime Ministership, has followed an overt form of socialism with state control on almost all aspects of the economy. In the political sphere, the party has pandered overwhelmingly to the Muslim vote bank.

Given these facts, the Congress cannot be accurately called either a Centrist or a Left-of-Centre party.

It therefore strikes as bizarre when Ramachandra Guha, a scholar specializing in Gandhi-Nehru studies chooses to apply different definitions to the same party in different publications within a space of just four days!

As the aforementioned facts show,  even if we accept both definitions for the Congress, Ramachandra Guha would still be guilty of inaccuracy. However, purely within the context of this Fact Meter, it is clear that Guha’s variable definition of the Congress party reveals his intellectual opportunism.

IndiaFacts Fact Meter Verdict: That Guha’s definition of the Congress party and/or its ideology is opportunistic is True.