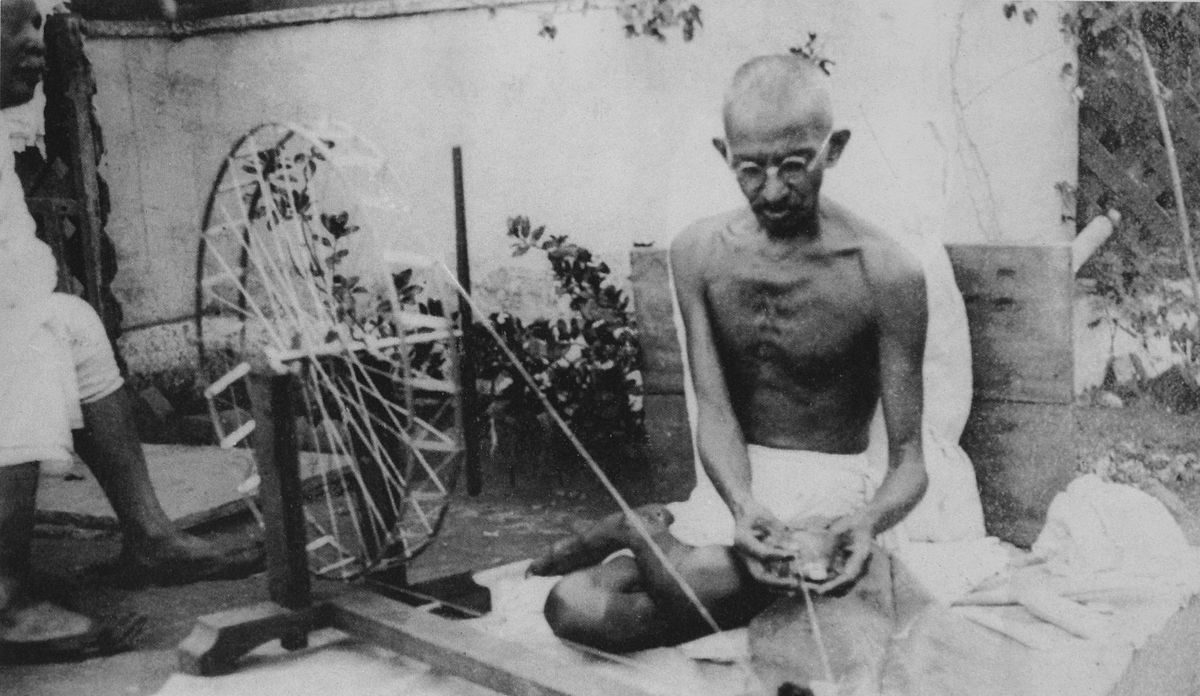 Since childhood, we are taught to worship you as the best thing to happen to this country, the perfect human. There is no escaping you in India. Your face smiles at us on banknotes, your name is given to every other road or government project. All others, most of whose contributions far exceeded yours, are cunningly pushed to the background or obliterated from history by the elements whose very business runs on deifying you.

Your greatness began in South Africa, they tell us, which starts with you being thrown out of the train compartment for not being white. For all your nonviolence, why were you so supportive of every British war effort, from the Zulu war to both the world wars? You called blacks ‘kaffirs’ and saw them as someone inferior. No wonder they still hate you there. You even recruited Indians for his majesty to die like flies in the WWI (more than 100000), for which you were awarded the title of Kaiser-e-Hind. Your arrival in India in 1916 was most likely not a coincidence either, since you arrived exactly when the British needed cannon fodder after the manpower losses in Somme and Verdun. On the other hand, you suspended the Non Cooperation movement because you were saddened by the burning of a few policemen serving the empire, leaving everyone who had followed you for two years feeling cheated. Because the lives of a few policemen serving the empire was worth more than the lives of thousands of Zulus, Boers and of thousands of Indian soldiers who died in a useless war. You never condemned the Jallianwaala Bagh massacre, yet called Udham Singh a madman. What kind of Satyagraha or nonviolence was this?

Hindu Muslim unity was your ultimate goal, at any cost, which was to be borne by Hindus alone. Backing Khilafat movement, which aimed at reinstating the Ottoman Empire that had ruined Asia for five centuries and had killed a million plus Armenians just a few years before, was the only way to Hindu-Muslim unity in your opinion. On the contrary, the very man who led to the defeat of the Caliphate, is the reason for what Turkey is today. Your Khilafat dreams cost India dearly, because it soon became an anti-Hindu movement, the most horrific of which was the Moplah riots in Malabar where thousands of Hindus were butchered. But you called the Moplahs brave and patriotic for doing their duty! Khilafat also strengthened the Muslim League, making leaders of people like the Ali brothers who swore by your name, but abandoned you soon as a dirty Kafir, the moment they didn’t need you to give them legitimacy, and fuelled separatist tendencies, which would cause the vivisection of the country less than three decades later.

You made tokenism and symbolism as our national character, with your preaching, which was very nice to hear, but never had concrete impact. So, just giving the depressed classes a name like Harijan does not elevate them. No wonder that calling anyone a Harijan today would result in a beating. Remaining shirtless to show sympathy for poor doesn’t make their lives easier. Calling manual scavenging as the “highest of work” did not honour the manual scavengers. How many of India’s poor was your charkha able to clothe, excluding your party members? Did it make enough cloth to cover the body of even one woman raped in the partition riots? We are taught  that you singlehandedly destroyed the British empire, an empire, which was ruling over one fourth of the world , which withstood the  Nazi Army alone for a year and a half ,which kept 300 million Indians under their thumb with less than a force of one hundred thousand civil servants. The fact is that your methods were tolerated because your activities helped the British Empire, by blunting the anger of the masses. British Empire mercilessly destroyed all those who posed a real danger to them, be it the armed revolutionaries or the armed uprisings. The likes of Veer Savarkar, Lokmanya Tilak were put away in jail for many years, in conditions you wouldn’t have lasted more than a day. All your fasts and marches were weekend getaways compared to the unimaginable and inhuman tortures that our real freedom fighters went through. Clement Attlee had only one word to say when asked about the effects of your activities on the British Empire: “Minimal”.

You stood not for the truth, but for the distortion of it, of promoting Sanatana Dharma as pacifism and surrender. You parroted “Ahimsa Paramo Dharmaha”, while conveniently ignoring the fact that us of Himsa for Dharma is considered Dharma itself in Hindu tradition. All this talk of turning the other cheek is actually found in the New Testament, and not in any Hindu scripture. What this skewered teaching did to the psyche of this country can be seen even today. Despite being the biggest democracy and a formidable military power, we hardly inspire any fear in our enemies as they are confident that their attacks will go unanswered.

Your minority appeasement is nothing less than shocking. Moplahs were brave and patriotic, but no words were spared by you for sympathising with their victims. Shivaji Maharaj, Maharana Pratap and Guru Gobind Singh were misguided patriots, but you called Abdul Rashid who killed Swami Shraddhanand as Bhai. Why did you not make any effort to save Bhagat Singh, Shivram Rajguru or Sukhdev Thapar from the gallows while signing the pact with Lord Irwin to end the Civil Disobedience Movement? You remained tepid about the hundreds of Muslim league fuelled religious riots, which took place from the Khilafat movement to the partition. In 1932, you went to fast until death on the matter of separate electorates for the depressed classes as it was divisive to the society, but were silent on the issue of separate electorates for the Muslims .

During WWII, you advised the English to vacate their houses for Hitler and called for the Jews to commit collective suicide in order to become immortal in history, but you forgot Mr Gandhi, that you couldn’t fool anyone other than the gullible masses of India. After the Direct Action Day massacre in 1946, you went around preaching peace tagging yourself with HS Suhrawardy, the very man who was on the forefront of causing them. You denied that anything was happening in Noakhali, while thousands of Hindus were being butchered there and you went there only when the situation was calmed. You gave the title of Qaid e Azam to Mohammad Ali Jinnah and upheld Jawaharlal Nehru everywhere (the party needed his father’s money) and pushed the capable Sardar Patel to a secondary role. You had absolutely no sympathy for Hindu and Sikh riot victims of the partition riots, and advised the Hindus and Sikhs of West Punjab to bravely court death and chided the ones who had escaped to India for “cowardice”, you advised the women threatened with rape in West Pakistan to lie still with their tongue between their teeth to cooperate with their “brothers” On the other hand, during your peace march to Noakhali, you told the Hindus to flee if they wanted to save their lives. Why this double standard, Mr Gandhi? And what does this tell us about your mentality

But your last fatal blow was yet to come. It was your fast unto death demanding that Rs 55 crores be  given to Pakistan, which it gleefully used in its Kashmir invasion of Oct 1947. Had David Ben Gurion been like you, Golda Meir like Nehru or had the Jewish leadership been like the Congress, the Jews would have joined the Sumerians and Babylonians as museum artefacts.

Could you have been repackaged by Congress and your disciples like Birla and Bajaj (who benefitted the most from the four decades of license permit raj) as a Mahatma had you died a natural death, instead of being shot dead by Nathuram Godse? Did the Congress follow nonviolence by not controlling the riots which were engineered post your murder, which cost the lives of more than 6000 Chitpavan Brahmins (because Nathuram Godse was one)?

No Mr Gandhi, I cannot call you a Mahatma even by the wildest stretch of imagination. Mahatma is someone who has a vision to make his country and people great and leads like a warrior from the front. You could never go beyond pious platitudes. India is an eternal land, not formed by a mandate or signature on a piece of paper. Why then should you be called as its father?

A wage slave wanting to do a lot more.