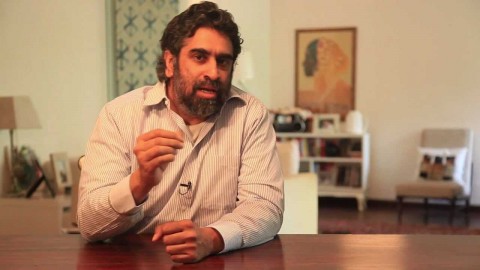 In the 1 October 2014 issue of Caravan magazine, journalist Hartosh Singh Bal repeated the now-jaded caution of how the victory of the Narendra Modi-led BJP in the 2014 elections has paved the way for the “fascist” Sangh ideology to engulf the nation. As usual let me quote the relevant citation:

Veer Savarkar, a self-professed atheist and revolutionary, first coined the term “Hindutva” in 1923. Perhaps his clearest articulation of the concept was in a speech he gave as the founding president of the Hindu Mahasabha, where he boiled down what it meant to be Hindu to two essential factors: “Everyone who regards and claims this bharatbhoomi from the Indus to the seas as his fatherland and holy land is a Hindu.” This position was inherently exclusionary……..

The leaders of the Sangh have always stood by this definition of belonging, highlighting certain parts of it according to their convenience. For example, it is difficult to understand how Indian-origin citizens of other countries, large numbers of whom support the RSS, qualify as “Hindus” when they can no longer list Hindustan as their “fatherland.” But then, while the definition of Hindutva was always a matter of selectivity, people of Hindu origin in other lands were not the targets of exclusion—some select inhabitants of India were…….This was made explicit by MS Golwalkar, the second chief of the RSS, who is perhaps the most important figure in the history of Hindutva and a man Narendra Modi publicly acknowledges as his idol. “Bharatiya” would not suffice as a term for Hindus, Golwalkar argued in his 1966 Bunch of Thoughts, because “there is a misconception regarding that word. It is commonly used as a translation of the word ‘India’ which includes all the various communities like the Muslim, Christian etc., residing in this land. So, the word ‘Bharatiya’ is likely to mislead us when we want to denote our particular society. The word ‘Hindu’ alone connotes correctly and completely the meaning that we want to convey.” Why was it necessary for the RSS leadership to convey any particular meaning of “our particular society”? The answer is implicit: to keep Muslims and Christians out of it.

As with most secularists, Mr.Bal does not give the circumstances when Savarkar and Golwalkar made those specific quotes. One thing to keep in mind is that Savarkar penned his seminal work ‘Essentials of Hindutva’ in the 1920s, when most of the states in Eastern Europe became independent countries because the communities therein were not able to co-exist owing to different languages, cultures, and even varieties of Christianity. Savarkar clearly wanted to avoid such a fate for the then Indian subcontinent, which had a more pronounced cultural unity, as stated by Dr. Ambedkar:

…To a traveller from within the boundaries of India the East presents a marked contrast in physique and even in colour to the West, as does the South to the North. But amalgamation can never be the sole criterion of homogeneity as predicated of any people. Ethnically all people are heterogeneous. It is the unity of culture that is the basis of homogeneity. Taking this for granted, I venture to say that there is no country that can rival the Indian Peninsula with respect to the unity of its culture. It has not only a geographic unity, but it has over and above all a deeper and a much more fundamental unity—the indubitable cultural unity that covers the land from end to end……

But Savarkar not being a stubborn Socialist/Marxist as most secularists are, was willing to give a reinterpretation of his views as seen in his 1937 speech:

Let the Indian State be purely Indian. Let it not recognize any invidious distinctions whatsoever as regards the franchise, public services, offices, taxation on the grounds of religion and race. Let no cognizance be taken whatsoever of man being Hindu or Mohammedan, Christian or Jew. Let all citizens of that Indian State be treated according to their individual worth irrespective of their religious or racial percentage in the general population…..

An important citation is also given in the manifesto of ‘Hindu Rashtra‘, in which Savarkar says:

“Religious minorities will have all the right to practice their religion in a Hindu Rashtra and the State will ensure that; but the Hindu Rashra won’t allow creation of a nation within a nation in the name of religious minorityism.”

Isn’t this the situation somewhat similar in most liberal democracies worldwide like the USA, Sweden, Australia? As far as Golwalkar is concerned, sample this statement he gave to some media persons in 1970:

If that sounds exclusivist then what will Mr. Bal make of these two statements:

1. I have said that I am proud of our inheritance and our ancestors who gave an intellectual and cultural pre-eminence to India….You are Muslims and I am a Hindu. We may adhere to different religious faiths or even to none; but that does not take away from us that cultural inheritance that is yours as well as mine..

2. Anyone living in this country who loved and drew inspiration from the great heritage of India and was loyal to India was a Hindu.

The first statement was made by Pandit Jawaharlal Nehru in an address to the students of Aligarh Muslim University in 1948. Will Mr Bal call the chief delegate of Indian secularism an ideologue of exclusivity?

The second quote was made by the famous legal personality Mohammed Ali Currim Chagla when he was paying his respects to Veer Savarkar. Did this reputed Muslim jurist  advocate the exclusion of minorities?

Now on to Mr. Bal’s next assertion:

The Constitution resolutely avoids giving any importance to history, mythology or ethnicity. It defines a geography shared by people who have adopted a set of values enshrined within its pages. Being Hindu has no special significance in this republic…..For the RSS this is anathema.

Really Mr. Bal? Let’s see what the then Law Minister Dr. Ambedkar declared during the discussions on the Hindu Code Bill in 1950:

The present bill is progressive. This is an effort to try to have one civil law for all the citizens under the constitution of India. The law is based on the religious scriptures of the Hindus.

Interestingly Dr.Ambedkar also used the same definition for the term “Hindu” that Savarkar had used:

This Code applies, (a) to all Hindus, that is to say, to all persons professing the Hindu religion in any of its forms or developments, including members of the Brahmo, the Prarthana or the Arya Samaj; (b) to any person who is a Buddhist, Jain or Sikh by religion; (c) (i) to any child, legitimate or illegitimate, both of whose parents are Hindus within the meaning of this section. (ii) to any child, legitimate or illegitimate, one of whose parents is a Hindu within the meaning of this section; provided that such child is brought up as a member of the community group or family to which such parent belongs or belonged; and (d) to a convert to the Hindu religion. […]

Application of Hindu code to the Sikhs, Buddhists and Jains was a historical development and it would be too late sociologically to object to it.  When the Buddha differed from the Vedic Brahmins, he did so only in matters of creed and left the Hindu legal framework intact. He did not propound a separate law for his followers. The same was the case with Mahavir and the ten Sikh Gurus.

By this token, Ambedkar was also a Sangh sympathizer.

The likes of Hartosh Singh Bal scream wolf whenever any statement is made espousing national integration and cultural unity from an Indic perspective. ‘India=Hindu Rashtra’ is a never-ending debate because the secularists are habituated to ignore any fact presented to support this claim.

Instead, Hartosh Bal is happy with token secularism as seen with his complaint of Modi not wearing a skull cap. But because Hartosh Bal asked, here is a video in which Modi responds to the skullcap issue. Mr. Bal can also see these two links to know first-hand the Modi-Muslim relationship.

What next? Greeting people with a “Namaste” instead of “aadaab” becomes un-secular? What does it say about the state of public discourse in this country when such partial pieces are showcased as mainstream commentary? But then going by the past record, it appears that the caravan of Hartoshesque secularists will not even bother to hit the brakes even as they continue sliding away on the road to oblivion.