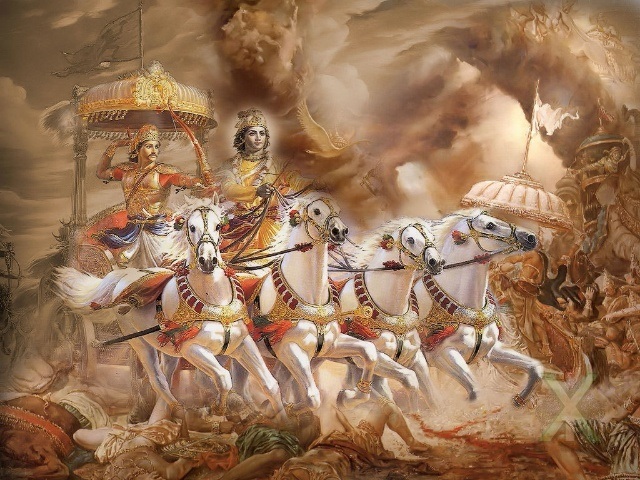 During a Śrāddha, if a yajamān (on whose behalf the Brahmins perform the sacrifices according to the Vedic rituals) reads out the Mahābhārata even in part to Brahmins, then her/his late ancestors are provided with ever-replenishing havi – i.e. food and drink for the departed soul.
Such variation of the fruits that the text claims can be reaped from the act of reading/listening to it, points out a relative balance of importance attached to the four varga-s, i.e. goals of the human life – dharma, artha, kāma and mokṣa, as we can clearly see that there is a prevalence of all sorts of desires (ranging from childbirth to victory to the eternal rest of one’s ancestors) and their fulfilment in the list mentioned above. If we look at another, and arguably the most famous, part of the text – the Bhagavad Gītā, we shall find enough references to this harmony of varied purposes, sought by different persons who are characterised by various guṇa-s or qualities. Needless to say, such an approach rules out the possibility of treating the Bhagavad Gītā as an interpolation into the body of the Mahābhārata as Edgerton et al have frequently done. In the Bhagavad Gītā, Bhagavāna Krishna declares:
“Ye yathā maṃ prapadyante tāṃstahaiva bhajāmyaham
Mama vartmānuvartante manuṣyāḥ pārtha sarvaśaḥ”
(In whatever way men approach Me, even so do I reward them; My path do men tread in all ways, O Arjuna!) (Bhagavad Gītā 4:11)
Even though the ultimate goal of the human soul may be the attaining of mokṣa, the text makes the Bhagavāna himself utter such words which suggest that people having different set of goals or different desires may attain the same through the act of reading/listening to the text – even the very act of reading the text of the Bhagavad Gītā has been described by the text as an act of worshipping, a sacrifice in itself.
“Adhyeṣyate cha ya imāṃ dharmyāṃ saṃvādamāvayoḥ
Jñānyajñena tenā ’hamiṣṭaḥ syāmiti me matiḥ”
(He who studies this sacred conversation worships Me by his intelligence) (Bhagavad Gītā 18:70)
Coming toward the conclusion, I would like to make the observation that the rasa-s that the Bhagavad Gītā employs in its literary-aesthetic body-complex are varied as well – karuṇa, vībhatsa, vīra – and even the bhakti rasa – a later day addition to the prescriptions of Bharata, Ānandavardhana and Abhinavagupta. We must also remember that the śānta rasa itself is a later-day addition to Bharata’s system of eight rasa-s expounded in the Nāṭyaśāstra. It has often been described as the ni–rasa or no-rasa at all, that pervades and transcends all the others; as such it may be described as being a derivative of all the eight rasa-s of the Nāṭyaśāstra.
Even if it is granted, if only for the sake of argument, that Vyāsa intended to produce the ultimate aesthetic effects on the reader made manifest by the śānta rasa without naming or mentioning it, then it may be contested by saying that irrespective of whether the śānta rasa may, or may not, have been the “ultimate” aesthetic objective of Vyāsa, he evidently had to use every other rasa in his arsenal to employ it in the final analysis and consequently create the effects which it is supposed to have the potential for.
So in this regard, there seems to be room for accommodating doubts; such that one cannot possibly emphasize the conjecture of the śānta rasa being the principal rasa producing a purportedly ultimate and singular aesthetic effect on the reader of the Mahābhārata. Clearly, the critic still cannot assert that, again to borrow the words of the Upanishads, “nānyaḥ panthā vidyate ayanāya” – there is no other way – as far as the domain of literary-aesthetic criticism in Sanskrit traditions is concerned.
Disclaimer: The opinions expressed within this article are the personal opinions of the author. IndiaFacts does not assume any responsibility or liability for the accuracy, completeness, suitability, or validity of any information in this article.

Visiting Natyashastra in the Ancient Paramparaa: A Vyaakhyaa by Prof Bharat Gupt