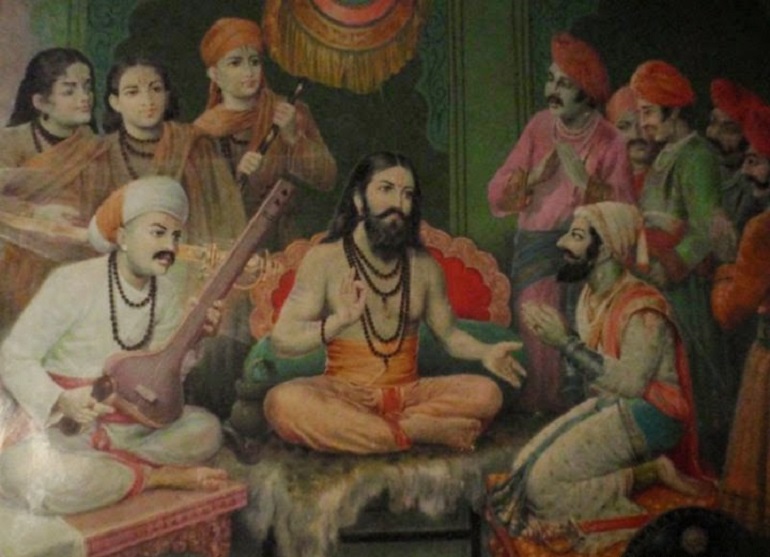 The colonization of India had one major destructive impact among several others: a near-complete obliteration of all brahma-kshAtra spheres of activity including leadership.

Today, both the Indian state and academia is driven by inherently anti-Hindu ideologies and not by knowledge and ability (which have to be essentially rooted in Hindu thought if they have to suit Hindu society). Therefore, the understanding of what qualities are needed for leadership have almost gone out of public discourse.

This has led us to such a pass that that we now believe that leaders have to be born thanks to interventions of fate, and wait for such leaders to be born. There is very little thought and effort invested in the institutions that train leadership. Now when “Hindutva” is trying to revive Hindu leadership, it is necessary to understand what makes for a good leader rooted in Hindu thought.

The prototype of a good leader is to be found in the ideals of kshatra – being selfless, well learned in subjects like statecraft, governance, war-science, justice, commitment to dharma, ability to endure and face hardships, an attitude of being dispassionate and impersonal when delivering justice and punishment.

This is a very high level view, and the several qualities required of a leader or ruler are found across hundreds of primary texts, which can be primarily classed as under:

Being wise, having presence of mind, courage, perseverance, ferocity, dispassionate delivery of justice, being on the right path and showing the society what the right path is, encouraging people to tread the right path and levying a high cost for deviation, imparting fearlessness among the virtuous, strategy, solving problems of people and polity through proper application of the subject, and logic are a few examples of a range of qualities a leader must possess, to be qualified as great.

Most of the attributes can be found in the self-actualization and self-transcendence layers of Maslow’s pyramid, and form a subset of these (problem solving, morality, creativity, spontaneity, lack of prejudice, acceptance of facts). The stories of Vikarama or Bhoja or Rama or Sibi repeatedly affirm these attributes.

One implicit statement of all this is that a good leader is one with infinite positivity. If we were to go back to dhArmic parlance, this translates to a near-absolute lack of handicap or inability.

11 of these are because of disabilities of the 11 senses, and 17 are buddhi doshas (mental/intellectual disabilities. Absence of nine tushTi-s and eight siddhi-s. tushTi-s and siddhi-s are limbs of a perfectly healthy buddhi.

Positivity can be enlisted in the form of tushTi, siddhi and completeness of experience of the world. One’s contentment, happiness, and wisdom depend much on internal factors, along with training. However, there is definitely a factor of misfortune in some forms of experience of the world – for example, in the case of physical handicaps. Although the reason is not always in one’s own control, such constraints do hinder one’s experiences and consequently one’s tushTi and siddhi.

One can expect factual counters to this assertion with great examples like sUradAsa, whose realization had little to do with his blindness. But the most important point here is that such inability is never said to be a hindrance in spiritual experience but in the experience of world. Physical health and soundness is a primary requirement for a leader and not for everyone. So we do celebrate the perfect body-vAstu of Sri Rama, Vikramaditya and Nala, their lack of handicap (of the mind or the senses), their infinite positivity, their siddhi-s and tushTi.

As negative examples we have dhRtarAshTra and Karna. The former had a physical handicap and also a buddhi dosha, a negativity stemming from a sense of being wronged. Hence he was deemed unfit to be a ruler, as he lacked conviction in justice. Similarly karNa’s sense of being wronged, his jealousy towards those he thought were more fortunate resulted in his siding with adharma, and in fact acted as a pillar of adharma.

On the contrary Vidura who had no personal ambition, was a selfless saint, devoted to knowledge and righteousness, and remained dispassionate throughout and sided with what is right. He is called one of the greatest ministers in the history of Bharata.

What differentiates a leader from others is his will to lead, which always runs the danger of becoming an exercise in egotism. A Raja represents will, and it takes great austerity to keep the will in line with dharma and untouched by qualities of ego such as ambition, self-righteousness, arrogance and audacity that comes with power, partial knowledge of reality and so on. It is not possible to overcome these without the 17 forms of tushTi-s and siddhi-s.

Thus a study of sAmarthya (ability, competence) and asAmarthya (disability, incompetence, disqualification) is a primary prerequisite in any attempt at dhArmic leardership.

We can now cite several examples of leaders throughout Bharata’s history from ancient times up to the independence struggle.

To begin with, we can cite bright examples like Lokamanya Tilak and Veer Savarkar for these qualities:

One can also cite how Netaji Subash Chandra Bose stands out on #1 #3 and #5 as a bright example. Netaji is also an example of how people like him suffered because of Congress decisions rooted in ego and megalomania.

One can recall how Gandhi imposed principles meant for personal practices on a political movement. This stemmed from his ego. One can relate how Gandhi’s ignorance and absence of positivity reflects in his decisions, in cases like Khilafat and Chauri-chaura. Thus, Gandhi stands out only on #1 and partly on #4, but does not quite fare as a great leader by Hindu standards, though he might be a great leader by western standards.

It also makes occasion to examine the qualities needed for an expert who can give us a smRti. The Constitution is a kind of smRti, and therefore in some corners, we hear the notion of constitution makers being smRti karta-s.

The qualities required for a smRti karta are slightly different from the qualities required to be a ruler. One should be a Rishi tulya (equivalent of a rishi) to be able to give a smRti for a dhArmic nation. He does not need too much of kshAtra but requires an in-depth knowledge of SAstra jnAna and an absolutely disability-free buddhi. While we did and do have such great men in this nation, clearly, those who gave us our current law and constitution were not endowed with such mettle.

Both the primary qualities (knowledge of dharma and being free of asAmarthya) were missing in our constitution makers. This includes the primary person credited with authoring the constitution Dr. B R Ambedkar. Ambedkar’s asAmarthya and consequent negativity, lack of dispassionate judgment, is visible not only in his writings like Riddles of Hinduism and Annihilation of Caste, but also in the constitution in a more subtle manner. His decision to convert to Buddhism was not rooted in positive conviction but one emanating from his sense of being wronged. This sense of being wronged by the society becomes fundamental to his assumptions in constitution-making instead of the fundamental principles based on which the state and society should be designed.

Thus, putting the author of the Indian Constitution on the same pedestal as Sri Aurobindo or Ganapati Muni would be undermining the very meaning of the word Rishi and the tradition of Rishi-munis. A Rishi is one who, having seen the social condition with utmost compassion, retires into contemplation and devises a solution to it with utmost dispassion. Examples like Devala and Ganapati Muni serve well in this context. Their solutions therefore, are not only socially viable but complete and just – they do not suffer from side effects like counter-suffering.

The concept that if someone who has seen and experienced suffering is empowered, can give solutions to it, is rooted both in compassion and ignorance. One who places himself beyond suffering, but is filled with compassion, is the one who is capable of giving its solution. A Rishi does not provide social design by undergoing suffering but by a dispassionate understanding of where suffering originates from and what its solution is.

Since independence, the standard of leaders in Indian politics has not risen, nor did we have any institution that grooms leadership based on traditional principles.

While the ill-fated separation of kshAtra spheres of activity (knowledge, military and governance) under a west-modeled constitution is one reason, there has not been enough understanding of what yields quality leadership necessary for a society like ours.

Most of the good leadership we saw arose despite the quality of politics and entered polity from outside political organizations. After the near-total destruction of the Hindu Mahasabha by Nehru, barring small initiatives like RRP, it is primarily the RSS-BJP that has been trying to build quality leadership for the country. Even the current PM who is known to be committed and capable is a product of the RSS-BJP.

Indeed, owing to their inherent commitment to the Hindu cause, the sangh parivar philosophy of leadership has some of the important features of what makes for a good leader rooted in Hindu thought.

They believe in positivity, and instead of going after differences with Gandhi, Ambedkar et al, they attempt to pick the positives wherever possible while criticizing leaders for their mistakes. It is therefore not surprising that today, the RSS is one of the most Gandhian organizations–whether it is in pushing for swadeshi economy or building civil movements or being inherently positive in outlook.

The RSS makees abundant ground level activity and sacrifice in line with the principles they believe in (this is also why Gandhi and the RSS had a positive view of each other). We can ignore superficial and motivated criticism like Gandhi’s nonviolence would not approve of RSS. Had Gandhi been alive today, chances are very high that he would dump the Congress to side with the RSS.

Today, what we see in social movements and polity is negativity, groupism, rhetoric, bargaining, and mortgaging social good for political and personal mileage.

Whether Hindus in popular discourse express this articulately or no, whether the public discourse today allows its expression in traditional terms or no, the innate craving for a leader with kshAtra (warrior) qualities shows often in our society.

This is one of the reasons Netaji, Bhagat Singh, Chandrasekhar Azad, Alluri Sitarama Raju et al happen to be popular in this country in spite of the Nehruvian education trying to put all these down as extremists. More popular are people like Tilak, Savarkar, and Sri Aurobindo who went beyond physical ferocity and tried instilling that spirit in Hindu hearts. However, the fact that Hindutva organizations are better than others hardly means they are fulfilling the leadership needs of society. They are trying to put up alternatives to those requirements.

Knowledge of SAstra and dharma is one area where we have the biggest shortage, and in which efforts from the Hindu side are rather scattered. On this, the Sangh Parivar’s philosophy is more on the lines of inspiring people instead of imparting it at the same time. For instance, rAjanIti is not taught but stories of great rAja-s are taught to inspire people into learning. This does not fulfill the need of learning but superficially keeps the spirit alive.

The kind of sAmarthya required for a good leader does not even figure in the list of priorities of the Hindu society: this shows how far we are from having one. A part of it is achievable through sAdhana/upAsana and SAstra jnAna. However, the conception of and institutionalizing kshAtra training cannot be substituted with any other kind of training.