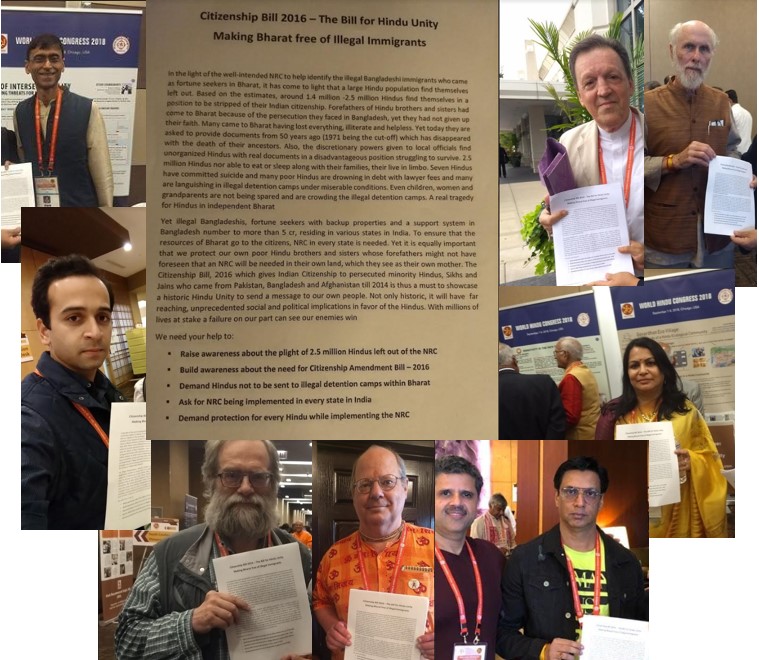 On the 125th anniversary of Swami Vivekananda’s speech in Chicago at the World Parliament of Religions, Non-Resident Indians gathered in Chicago to uphold Swami ji’s values of tolerance and demand the rights of persecuted minorities from Bangladesh, living for a few generations in India, to find a place in as citizens. This is in the context of the fact that millions of such people do not find their names in the NRC.

The group under the banner of several organizations like SinghaBahini America, GHHF (Global Hindu Heritage Foundation), NavaBanga, attended the World Hindu Congress (WHC) also happening in Chicago and raised awareness about the Citizenship Bill 2016. The Bill which promises to ensure that persecuted minorities of India’s neighboring countries who came down to India for safety, are included as citizens. A leaflet campaign and a one to one campaign on the topic was also carried out. Around 3000 Hindus from around the world attended the event from September 6th to 9th.

Many important personalities and scholars of Indology like Dr. Koenraad Elst, Stephen Knapp, Dr. William Frawley, Shefali Vaidya, François Gautier and Dr. Makarand Paranjape supported their campaign. Sudershan TV founder Suresh Chavhanke also lent support to the campaign. Movie directors from Bollywood and Hollywood also gave their endorsement for the campaign. Director Madhur Bahndarkar and Hollywood director Aditya Patwardan gave their endorsement for the Citizenship Bill to become an act. BJP President Amit Shah, who while speaking at a rally in Kolkata, sometime back, highlighted the need for NRC and also promised to make the Citizenship Bill into an Act. Recently he made a similar statement in Delhi as well.

SinghaBahini America, an organization leading the campaign expressed concern about the plight of many persecuted Hindus from Bangladesh, living in Bharat over many generations, being sent to illegal detention camps running across Assam. Devdutta Maji, President of SinghaBahini who visited the affected people and has started a helpline expressed deep concern.

Satya Dosapati, Vice President of GHHF rallied the NRI community to support the Citizenship Bill. He raised concerns regards to the documents being asked for registration in the NRC and the availability of such documents after many generations. Also be expressed anguish over the reports of D-doubtful voters being at times picked up randomly and sent to the detention camps, running all over Assam. Even women and elderly centenarians are not being spared he noted. Many poor Hindus he said are drowning in debt, pawning everything they had while trying to meet lawyer fees. Some suicides he mentioned are also being reported frequently.

Dr. Omendra Ratnu, President of Nimitekam, an organization working for the Hindu Refugees of Pakistan and who had participated in the WHC also lent his support.

The overarching support for the Citizenship Bill at WHC gave hope to the campaign organizers who now plan even to go for bigger mass mobilization for the cause.