Hindus have no rights to free speech 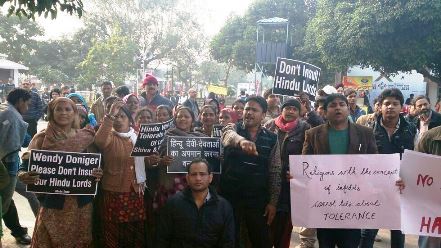 THE past few weeks have been rather upsetting for Hindus across the world. Under the pretext of freedom of speech, constant attacks on Hindus are being orchestrated by Hindu haters and other ill meaning organisations and individuals. Recently Wendy Doniger’s name has come up in every Hindu household because of her mischievous book.

As soon as the news of the withdrawal and pulping of all the copies of Wendy Doniger’s book The Hindus:An Alternate History came out, the well-known class of self-proclaimed liberals and secularists started talking as if freedom of speech in India was in danger.

On February 15, 2014, a few of these individuals came to Pragati Maidan, New Delhi, right in front of the Penguin India stall, to read out from the book ‘The Hindus’. They named this event as a ‘Read-in for Banned Books’. They also circulated misleading and inflammatory pamphlets which claimed that there was no ‘reasonable offence’ done by Wendy in her writings, and that Hindus are ‘believers’ of unexamined beliefs.

The pamphlet claimed that the people who organised this read-in were in ‘solidarity with voices being muzzled’ and with ‘publishers’. They also then claimed that they were ‘independent’ but further research on these individuals showed otherwise.

The event created on social media for ‘Read-in for Banned Books’ as a protest was created by three individuals named Brinda Bose, Amit Sengupta, and Manas Roshan. Manas Roshan incidentally is with the Caravan Magazine and is very proud of its recent cover piece on “Aseemanand and Hindu Terror’. This big piece, also titled ‘Believer’, is the same article that falsely claimed that RSS top brass was involved in plotting attacks that killed 119 people based on ‘interviews’ done with Swami Aseemanand.

One cannot emphasise enough that Swami Aseemanand, in a press release, vehemently denies that such ‘interviews’ ever happened and he states that no closed door meetings with senior leaders of social organisations occurred. The same was also reiterated by NIA a few days after the release of this maliciously fabricated article by the Caravan Magazine.

Ironically, in the banned book reading, there was no mention of books like the “Red Sari’ which is a fictional book based on Sonia Gandhi’s life. There was no mention of M O Mathai’s book ‘Reminiscences of the Nehru Age’ that contains a chapter titled ‘She’, which describes an account of his sexual relationship with Indira Gandhi. It is imperative to note that these book bans were consciously and deliberately enforced and endorsed by the same class of people who are now claiming to be defenders of ‘free speech’. Both the Left “intellectuals” and the liberals like Trinamool’s artists didn’t protest when Bangladeshi writer Taslima Nasrin sought to attend a literary conference in Kolkata and was blocked by Muslim orthodoxy. In the fact, Trinamool Congress Government told her to return right from the airport. Their hearts now, oh so bleeding for Doniger, had gone cold back then.

But here’s a text of that shows why Hindus chose to protest against this so-called read-in.

When the book reading started, some students and professionals came along and protested. All of these students and professionals hailed from from premier institutes like IIT, IIMC and so on. Apart from the individuals, members from Hindu Sena had turned up, upset, because of Wendy’s constant denigration of Hindu Gods. A handful of peaceful protesters, standing with handwritten posters, were also joined in by passersby who saw the media and commotion.

Ajay, a Charted Accountant, who joined the protest noted that when the book reading was going on, the protesters made repeated appeals to stop the reading of the book, but the organisers of the event continued reading the book from their iPads. But when the police arrived to disperse the protesters and the protesters explained to the police that‘The Hindus’ was being read, the members of ‘Read-in for Banned Books’ started flashing books of other authors like Premchand to deceive the police and prevent the stoppage of reading.

Pandey, a Post Graduate from IIT who was also a part of the protest said that he was shocked when an old woman with white hair, named Geeta Patel challenged him and other protestors by shouting ‘Who are you to speak on behalf of Hindus?’ He replied by saying ‘Who are you to defame Hindus?’ for which he got no response. The question raised by Geeta Patel is rather grave, as it seems like this class of ‘defenders of free speech’ require Hindus to carry certificates of ‘Hinduness’ to protest against hate writings and speeches.

The 15 February protest and the newspaper articles that followed, again, stand to expose the hypocrisy of the intellectual class which time and again defends denigrating attacks on Hindus by repeatedly stating that the voices of protest are uneducated and ignorant. All across the world, the modus operandi of individuals involved in defaming Hinduism and Dharma is to position themselves as scholars, intellectuals, thinkers and secularists. And, those who challenge these voices are to be immediately struck down by labelling them as ignorant, extremists, fundamentalists, sanghis and saffron terrorists.

(This report first appeared in the Organiser)