Any Hindus in the room? Please raise your Right hand 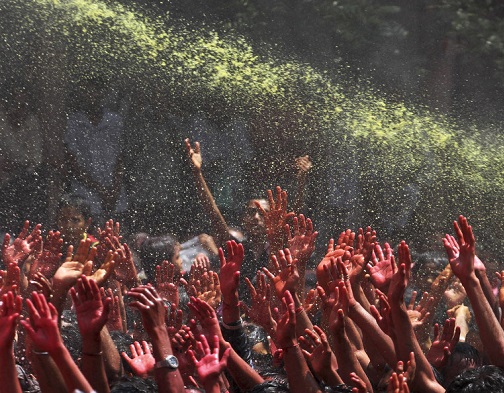 This piece originally in Kannada was translated to English by Shilpa.B.K

There are several people who have their Government documents to validate their Surnames that echo their respective Caste and/or Region: Brahmin/Vokkaliga/OBC/SC-ST/Minority. It is now an article of faith that they use these titles to claim facilities and freebies provided by the Government and demand the respect attached to their titles. However, when they are asked “are you are Hindu?” Pat comes the reply: “I am Secular.”

[pullquote]There is an increase in the number of people who think that if you call yourself a Hindu, you automatically belong to the RSS. There is one part of the society which is willing to call itself Hindu, which is genuinely interested to learn our culture but scared to do so in public lest they be branded as RSS agents, fascists, etc.[/pullquote]

The word “Hindu” originated from Persia derived from the historical fact that people who lived on the banks of River Sindhu were known as Hindus. And now there’s a bunch that now argues that based on this fact, they are not Hindus.

Let’s also look at some nicknames babies are called: “baby,” “shona,” “sweety,” “gudiya” so on. After about five months, that is, after the naming ceremony, the baby gets a name like say Rajesh and by the time it turns three or five, “Rajesh” typically becomes “Raju.” Being called Raju did not change your past and neither being addressed as baby, shona etc at the age of five change your existence. Similarly, if Persians or any others call the people of this country by a certain name, it won’t change our existence or our heritage. Even if you don’t wish to identify yourself as a Hindu, you cannot deny the fact that the heritage of this nation is within you.

I am liberal.. I am detached

This is another common refrain but if we ask ourselves honestly: are we really not attached? Don’t we represent anything? They say that students from different schools can be distinguished based on the skills they possess. The same goes for people born in different environments following different traditions. And so, the detachment that our liberals talk about is possible only by spiritually sacrificing one’s own home and by extension, society.

There are many leftists who call themselves liberals but how can a liberal be a leftist? This is similar to a spider claiming that it flies in the air. Taken to its logical conclusion, their argument seems to be that we are at fault because we have an identity and follow a certain way of life and traditions.

Indeed, the word “identity” lends itself to a bit of controversy. Let’s suppose a committee from Karnataka approaches the centre with a problem. Now imagine the Central Government saying “why are you only representing Karnataka? Aren’t you concerned about the neighboring states?”

The aim of this argument is to help people rethink the concept of identity so liberally bandided about by the so-called liberals. Don’t forget that minorities who call themselves liberal/secular in Karnataka have not yet moved out from Mosques. Yet it is only Hindus who need to forsake and hate Hinduism to earn the hoary mantle of being a liberal?

There is an increase in the number of people who think that if you call yourself a Hindu, you automatically belong to the RSS. There is one part of the society which is willing to call itself Hindu, which is genuinely interested to learn our culture but scared to do so in public lest they be branded as RSS agents, fascists, etc. This is like pretending not to be thirsty only because you don’t like the potter.

The author is the Delhi reporter of the Kannada newspaper, Hosa Diganta.